You are here: Home / Faith and Religion / Christian Fiction / Two Days in Caracas: A Titus Ray Thriller by Luana Ehrlich 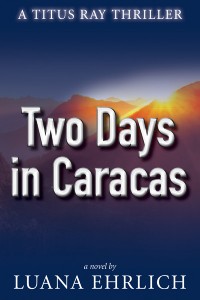 Titus Ray faces a threat he never imagined. Can he overcome the obstacles and capture Ahmed Al-Amin before it’s too late?
In this pulse-racing Christian thriller, CIA intelligence officer, Titus Ray, travels from Costa Rica to Venezuela in an effort to stop Ahmed Al-Amin, a Hezbollah assassin, from murdering a high-profile government official. Along the way, a family crisis jeopardizes his mission, and an Agency division head threatens to destroy his career. As the danger mounts, he’s forced to partner with an untested operative to complete the mission and bring Ahmed to justice. Will he make it in time?

What Inspired You to Write Your Book?
I was inspired to write this series when I heard about the persecution of Christians in Iran about five years ago. Because I’ve always been an avid reader of mysteries and thrillers, I knew my first book would be in this genre, and that’s when I asked the questions that became the plot line of One Night in Tehran. I wondered what would happen if a veteran CIA intelligence operative in Tehran encountered a group of Iranian Christians and became a believer? How would his conversion affect his career? How would a man trained to lie and deceive others be able to follow the teachings of Christ in the real world?

How Did You Come up With Your Characters?
Titus Ray is a composite of several protagonists I’ve enjoyed reading in the mystery/suspense/thriller category ever since I picked up my first spy novel when I was eleven years old. I was greatly influenced by the writer, Adam Hall, and his Quiller series. I’ve also followed the protagonists in the John Sandford mysteries, and the depth of those characters has also influenced my understanding of the personality of Titus Ray.

Once inside, we discovered a man writhing in pain. He was curled up in a fetal position on a blood-soaked mattress, holding his abdomen.

That area appeared to be the source of all the blood.

When we came through the door, his eyes popped open. Seconds later, he raised his arm as if he were beckoning us to his side or trying to fend us off—I wasn’t sure.

I knelt down beside him and felt his pulse.

“We need to get him out to your Jeep,” I told Mitchell.

When he didn’t answer, I turned around and saw him staring down at the body, seemingly paralyzed by the ghastly sight.

I realized he hadn’t seen a lot of wounded men before.

When I repeated the order, he immediately grabbed his phone and told Sonya to get the Jeep ready.

After he hung up, I said, “See if you can find some towels or a bed sheet, anything we could wrap around his middle and stop the bleeding.”

Mitchell went across the hallway to the bathroom and returned with a couple of dirty towels. I pressed them against the man’s wound and helped him sit up.
He groaned and mumbled something in Spanish.

Seconds later, he passed out.