You are here: Home / Fiction / Paranormal / Transference by Jeff Fuell 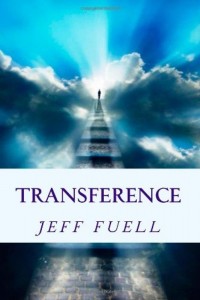 Michael Potters is caught in a dilemma. He is attempting to solve his own murder and trying to do so in the form of a little boy whose body he now inhabits. While doing so, he not only has to keep the secret from his own son, but from the new family that he is now living with. To add even more to his troubles he is having to once more attend grade school, something which was frustrating enough the first time. He has no idea why all of this is happening to him nor how much time he has left to find out why. All he can do is race the clock to try to discover who was responsible for murdering him before his time runs out.
From the author: Like most people, I have often wondered what it would be like to be a kid again, but to retain the experience and wisdom that I have as an adult. This is a good deal about what this story is about. It is also a bit of a culture clash as the main character of this book experiences being a kid again in a whole new world that is different from his own. I suppose every generation looks at the one coming up and asks “Is this what our future is? We’re doomed!” Michael Potters is actually having to face this experience firsthand not because he wants to, but because he has no alternative.

What Inspired You to Write Your Book?
I had to idea to write a out-of-body novel where a man was trapped in the body of a little boy and trying to solve his own murder while keeping his secret from his loved ones. The story pretty much unfolded as I wrote it. I really had no idea how it was going to end until I wrote it.

How Did You Come up With Your Characters?
The story came before anything. The characters came to life as I was writing them and got to to know them better.