You are here: Home / Fiction / Mystery/Suspense / Trail of Secrets by Laura Wolfe 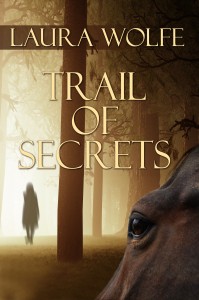 Spending three weeks of her summer at the elite Foxwoode Riding Academy in northern Michigan should have been one of the happiest times of sixteen year-old Brynlei’s life. But from the moment Brynlei arrives at Foxwoode, she can’t shake the feeling she’s being watched. Then she hears the story of a girl who vanished on a trail ride four years earlier. While the other girls laugh over the story of the dead girl who haunts Foxwoode, Brynlei senses that the girl—or her ghost—may be lurking in the shadows.

Brynlei’s quest to reveal the truth interferes with her plan to keep her head down and win Foxwoode’s coveted “Top Rider” award. To make things worse, someone discovers Brynlei’s search for answers and will go to any length to stop her. As Brynlei begins to unravel the facts surrounding the missing girl’s disappearance, she is faced with an impossible choice. Will she protect a valuable secret? Or save a life?

What Inspired You to Write Your Book?
I’ve spent a good portion of my life around horses, and wanted to write a novel set at a riding academy. While on a trail ride a few years ago, I thought, What if a horse returned from a trail ride without a rider? What if that person was never found? From that one thought, the seed for Trail of Secrets was planted.

How Did You Come up With Your Characters?
The main character, Brynlei, has many of my own qualities, except she is more extreme. I was fascinated with the idea of making her a highly-sensitive person, and did a lot of research on the subject. The other characters developed as I wrote them. I integrated some personality traits and characteristics of people I have known to make them believable. All of my characters are purely fictional, though.