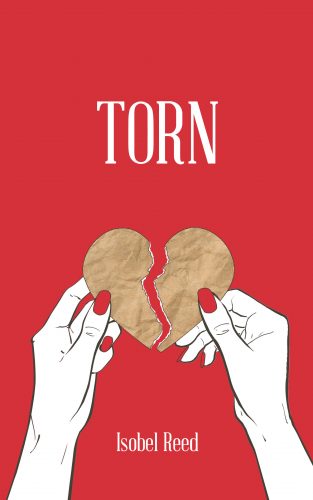 Jenny, a fiery war correspondent from London, has left a trail of broken hearts along the battlefield. After witnessing the death of her close friend and ex-lover, she starts to question everything. Leaving behind her friends and family, she escapes to the small, picturesque town of Portamaine in Texas.

As she endeavours to work through her loss and make a decision about her future, things get even more complicated when she meets two hunky locals, Jackson and Todd. Already torn, she ends up with more decisions than she bargained for as she finds herself in the middle of a love triangle. Will she follow her heart or her head?

What Inspired You to Write Your Book?
Ever the hopeless romantic, Torn was inspired by my love of the romance genre.

How Did You Come up With Your Characters?
I took a lot of inspiration from my female friends, who all together are the embodiment of Jenny, the main character. She is smart, funny and strong but has a habit of questioning herself.

Book Sample
As she cosied up under the floral sheets, she thought she heard a noise coming from downstairs.

She lay still and tried to listen out for something else. This time she heard a creak. She started to panic and her mind was racing, bursting with questions. Could it be a burglar? Did they think the place was empty? Did they see her arrive?

Trying to be as quiet as possible, Jenny slowly rose from the bed and frantically looked around the room for something to protect her.

“Why didn’t I buy a gun? I should have bought a gun. Who goes to America and doesn’t buy a bloody gun?” she mumbled to herself.

Grabbing a tennis racket, she tiptoed down the stairs while trying to listen out for more noises. A strange jingling was coming from the kitchen. Someone or something was in there.

In the dark she could make out a figure standing by the backdoor next to the kitchen countertop. At first glance it looked like a man. Her heart started racing. Suddenly feeling very alone and unprepared, she tried to remember all those self-defence classes she’d been forced to take but her mind went blank. There was no time. She leaped on top of the figure and unleashed the racket to any body part she could reach.

“Get out of my house!” Jenny screamed back. “The police are on their way!”

The stranger managed to grab the racket out of Jenny’s hands and threw it as far as he could across the floor. Dodging Jenny’s fists, he swung her around to get her off his back. She pushed back, and losing his balance, they both toppled to the floor. His heavy chest lay on top of hers, both of them gasping for air.

“Who the hell are you?” The man searched her face for clues.

“Yeah, this is my aunt’s house. Her name is Harper, Charlotte Harper. Now who the hell are you?”

“Fuck.” Jenny pushed him off her and stood up. She turned on the light and caught sight of what appeared to be a very good-looking man. Realising she hadn’t made the greatest first impression, she felt herself shudder.

Still out of breath, Jenny started to explain, “Charlotte rented out her house to me, for the next few months. She said she was going to visit some family in Florida. Did she not mention it?”

The look on his face changed; he’d also realised his mistake. “She did mention something to that affect, but I didn’t realise she would be renting out the house.”

He went silent. Jenny started to get annoyed. Why was he not explaining what he was doing there or apologizing for scaring her?

“So perhaps a sorry? Sorry for scaring the shit out of me maybe?” she said, annoyed.

Shocked, he cried out, “Me?! Which one of us was just beaten with a tennis racket?” Visibly irritated, he grabbed his keys and headed towards the door. “You’re lucky, I’m not the one calling the cops darlin’.” With that, he slammed the backdoor and made his way into the night.

“Excellent, already making friends Jenny.” She inhaled sharply and skulked back up to her room.