You are here: Home / Fiction / Action & Adventure / Tommy Black and the Staff of Light by Jake Kerr 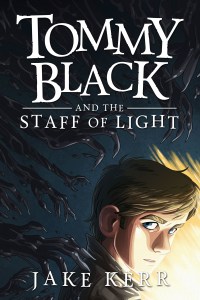 For fourteen-year-old Tommy Black, nothing is worse than being raised by an overprotective grandfather in the city that never sleeps. That is until his grandfather is captured by magical creatures and Tommy has to save him with his family’s magical staff.

That wouldn’t be so bad, but the only magic he can do with the staff is weak–making light. What the heck can you do with light?

Tommy finds out as he fights golems, shadow creatures, and djinn in a journey that features a magical river, an enchanted train, and an illusionary fortress. But the worst part of all? Tommy has to save his grandfather with the help of Naomi, a girl whose talent with magic is only rivaled by her ability to hurl insults.

“Jake Kerr has told an exciting coming-of-age tale that asks serious ethical questions about the costs of magic. This is a world that will stay with the reader long after the last page.” – Ken Liu
Hugo, Nebula, and World Fantasy Award winning author of The Grace of Kings

What Inspired You to Write Your Book?
I’ve had a fairly successful career writing short fiction for adults, and in one of my writing group exercise sessions I was assigned to read something outside my comfort zone. So, thinking I had never really written anything for my kids, I decided to write a young hero adventure scene. That scene grew into a few chapters, and those chapters grew into a novel.
What is great is that every step of the way I fell more in love with the story. And, ultimately, I was able to take some of the thematic depth I use in my adult fiction and apply it to a simple adventure novel.

How Did You Come up With Your Characters?
The protagonist started out as a stock young hero with a magical legacy, but as I wrote more of the novel, his thin character transitioned into innocence, which became really powerful within the story. Naomi, his friend, was based on my daughter Willow, who is not afraid to be blunt and sarcastic when facing things and others that disappoint her. It is one of her best and sometimes more difficult traits. 🙂 Ultimately, the characters are all based on bits and pieces of people in my life.

Book Sample
My grandfather laughed. “You presume to ask me for my staff? Do you forget all I have done for you?” He tapped his cane to the ground again, and the shadow appeared to get smaller, but only for a moment.
The shadow responded with a short phrase, and my Grandfather let out a short laugh. “Be reasonable? What is reasonable about giving up the staff?”
The shadow then growled and spoke again. My grandfather no longer sounded amused as he stated in a clear, firm voice, “Baseless threats do not become you, Vingrosh.”
The creature growled again and with purposeful slowness rose from the alley into a vague human-like form. An arm reached out and pointed over my grandfather’s shoulder behind us. I looked around and saw another shadow seeping down the wall.
My grandfather saw it, too, and in a blur, twirled the cane in his left hand and then plunged it down against the cobblestone. It let out a crack like thunder. The shadow creature in front of us fell back a few feet, while my grandfather yelled, “Run, Tommy!”
I held my ground.
Errol Flynn would not flee and neither would I. My Grandfather was old. It was time for me to take care of him. I moved forward a step and swung the broomstick at the shadow. There was no resistance. The end of the stick swung through the black air, followed by my hand. As my fingers touched the shadow they immediately went numb. My momentum carried the rest of my hand into the creature. I cried out and yanked my hand back. The broomstick fell from my fingers into the depths of the blackness. Thankfully, my hand emerged, but it was cold and without feeling.
“Tommy, no!” Grandfather grabbed my other arm and hauled me away. The force of his grip was painful. He dragged me behind him as he sprinted toward the theater alley entrance.
I looked over my shoulder but could only see blurs of black.
As suddenly as he had stopped earlier, Grandfather stopped again. This time I did collide with him, but before I could fall to the ground, he grabbed me and held me close.
“Tommy, that was a very foolish thing you did. Now you must listen to me. Whatever you do, do not move. I need you to stay as close to me as possible.” I couldn’t tell why we had stopped. We were just outside one of the emergency exits from the theater, standing close to the door. I looked back, and squeezed my hand into a fist even though I couldn’t feel it. The entire alley was an oozing mass of black, moving toward us.

About the Author:
After fifteen years as a music industry journalist Jake Kerr’s first published story, “The Old Equations,” was nominated for the Nebula Award from the Science Fiction Writers of America and was shortlisted for the Theodore Sturgeon and StorySouth Million Writers awards. His stories have subsequently been published in magazines across the world, broadcast in multiple podcasts, and been published in multiple anthologies and year’s best collections.
A graduate of Kenyon College, Kerr studied fiction under Ursula K. Le Guin and Peruvian playwright Alonso Alegria. He lives in Dallas, Texas, with his wife and three daughters.