You are here: Home / Fiction / Mystery/Suspense / TIME’S UP by Janey Mack 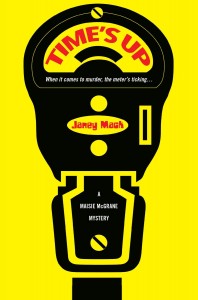 TIME’S UP – A Maisie McGrane Mystery
A scrappy meter maid who’ll do anything to get onto the police force quickly discovers Chicago’s murder and corruption are nothing compared to the perils of deceiving her Irish family of cops and ex-Army Ranger boyfriend.

All her life, Maisie McGrane dreamed of following in her father and olderrothers’ footsteps and joining the force. But when she’s expelled from the police academy, she’s reduced to taking a job as a meter maid. Now, instead of chasing down perps, she’s taking abuse from every lowlife who can’t scrape together enough to change to feed the meter.

When Maisie stumbles across the body of a City Hall staffer with two bullets in his chest, her badge-wielding brothers try to warn her off the case. But with the help of her secret crush, shadowy ex-Army Ranger Hank Bannon, Maisie’s determined to follow the trail of conspiracy no matter where it leads. And that could put her in the crosshairs of a killer–and all she’s packing is a ticket gun.

What Inspired You to Write Your Book?
I read an article about how the city of Chicago sold their parking meters to Saudi Arabia for 75 years. Chicago has the highest parking rates and fines in the United States. That idea was my jumping off point. I couldn’t get over the idea that an American city would do this.

How Did You Come up With Your Characters?
I have over-protective brothers. So a younger sister trying to compete is a character I know inside and out. Maisie’s dream of becoming a cop like her brothers and father and being forced to work as a meter maid seemed a natural conflict that just sort of snapped together.

I love complex characters. No one is all good or all bad. My favorite villains are the scary ones you can’t help but empathize with.

My abs were screaming. Sweat slicking between my shoulder blades, I ignored the rhythmic grunts next to me.

Gut it out. Hank’s voice echoed in my head.

“Holy shit, that’s gotta be a record,” my counter said.

I lay prone on the mat, abs twitching like an epileptic at a rave from ninety-one sit-ups in two minutes. Fair to middling for an Army Ranger. But for me, a first in my class and a complete and total victory over jerkwad Tommy Narkinney.

Tucking my knees to my chest, I rolled up onto my shoulders and bucked to my feet Jackie Chan-style. Digging deep not to drop my head past my knees and suck air.

I called over to Tommy. “How many, Nark?”

He sat on the ground, forehead on his knees, breathing heavy, straw-colored hair damp with sweat. “Eighty-eight.”

Tommy frowned in suspicion. “And you?”

“Ninety-one.” I raised my arms over my head, easing the fire at my sides.

He rolled his eyes and flopped back onto the ground. “Fuck me.”

“McGrane!” the sergeant shouted with an ex-Marine’s perfect enunciation and eardrum-blowing volume. “Quit dicking around. Reskor wants you.”

And I knew why. I was finally going to join the ranks of Flynn, Rory and Cash McGrane. Just as my older brothers had all been awarded Top Cadet, so would I.

It took every ounce of cool I had not to skip like a little girl out of the gym. I trotted up the stairs to Reskor’s office and rapped on the thick oak-paneled door.

Polished wood floors, oriental rugs, leather chairs–it looked more like the office of a Fortune 500 CEO than the Commandant of the Chicago Police Academy.

I stood at full attention in front of Reskor’s desk, staring blankly over the top of his balding pate.

Adrenaline pulsed double-time through my veins. “No thank you, sir.”

“Sit.” Reskor pointed at the chair.

He opened a manila folder on his desk, M. McGrane typed neatly across the tab. “Let’s see… ninety-eight percent on the written exam. Scored ‘expert’ on the shooting range, and a first in PT as well.”

My knee started bouncing. I leaned forward, pressing it still with the heel of my hand.

“But I regret to inform you that you failed the psych review.”

“Huh?” Failed the psych review didn’t sound anything like ‘Congratulations Top Cadet.’ “I’m sorry… What did you say?”

The sweat on my forehead had dried to salt. I ran a hand over my gritty face. “There must be some mistake, sir.” The room began to warp at the corners. “On what grounds?”

“As you know, failure on any exam results in immediate dismissal from the cadet program.”

This couldn’t be happening.

“Please, sir. On what grounds?”

He pressed the tips of his fingers together and gave it to me, right between the eyes. “The testing revealed you have an almost pathological need to be liked. The consensus of the peer review is that you are too thin-skinned to deal with the daily barrage of public hostility and unfriendly situations that a police officer encounters.”

A pathological need to be liked? Me?

I realized I was rocking back and forth in the chair and got to my feet. “Sir, may I re- apply, sir?”

“In a year, you may.” His breath huffed out in little sigh. “Reinstatement at the Academy is extremely rare. I see little point unless you can provide empirical evidence at that time to disprove the diagnosis.”

Reskor rose and held out his hand. “Not everyone is meant to be a police officer, Maisie.”

And like some idiot robot, I shook it. “Sir, yes sir.”

News of my disgrace traveled fast.

Tommy Narkinney was waiting for me in the hallway. “Tough bounce, kitty puncher.” Before I had time to tell him what a jackass he was, two academy instructors, one male and one female, escorted me to my dorm room.

They watched me pack my gear and walked me out to my car in the parking lot.

I sat in my Honda Accord and tried to remember how to start it, jumping when the female instructor knocked on the window. I turned the key partway and fumbled for the electric window switch.

“Hey.” She gave me a sympathetic frowny-smile and said in a chipper voice, “Is there someone I can call for you?”

“No. I’m fine. Really. Thanks.” I zipped up the window and turned the key fully in the ignition.