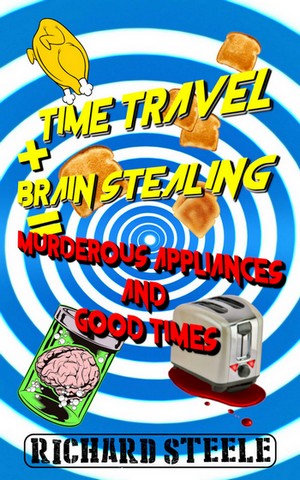 Joe Brown thought he was living an ordinary teenage life, in an ordinary town, wearing some very ordinary secondhand underwear… until something terribly unoriginal happened that would change his life and underpants forever.

Following the death of his parents, who died in a cliché and completely unimportant way, young Joe is about to find out that living in a town conveniently named Doomsville, does have its draw backs.

For reasons unknown, Joe now must face the demonic creations of a stereotypically bad villain known only as ‘The Master’, who has a penchant for pickled brains and poor puns.

Dumpsters of Doom, Toasters of Terror and the occasional Cheese Sandwich of Carnage all set out to hunt poor Joe and retrieve his brain to fulfil The Master’s destiny.

With the help of his best friend, a disturbingly gross Godmother and some random stalker he just met, Joe Brown is about to learn that what’s between his gunk ridden ears could be the key to saving the world and time itself.

Come and embark on an epic mind-bending, time-travelling quest full of confusing sub-plots, poorly constructed characters, science fiction that only a Flat Earther would believe, and every inappropriate joke you’ve ever thought of but couldn’t say out loud at your Grandmother’s funeral. Don’t say I didn’t warn you…

What Inspired You to Write Your Book?
I grew up reading Andy Griffiths 'Just' series and moved onto his 'Bum Trilogy' with my favourite being the second in the series 'Zombie Bums From Uranus', loving his querky approach at toilet humour.

As an adult I wanted to take that style and adapt it to a more mature audience and incorporate a darker humour aspect.

I thoroughly enjoy non-sensical satirical plots that amuse the audience without much thought, alot like the Naked Gun Trilogy movies and alike, and I believe it was a good mixture of the above mentioned which formed this book.

How Did You Come up With Your Characters?
All the characters in my book are rather two dimensional and for good reason. I am not looking to engage the reader in a bond with any of them, which will be made exceedingly apparent by the running commentary made by the narrator throughout.

I did this so the reader has a 'No Strings Attached' feel to the plot and at the conclusion can feel relieved regardless of its outcome, allowing the humour and satire to take over the majority of the plot.

The closest character to myself would be the narrator himself, taking him from being an omnipresent feature and instead making him the most important voice in the book.

It was a dull, dreary, desolate day in the humble town of Doomsville. It is a small town full of dejected, demoralized and despondent people living day to day, drudging through their dismal lives. Unbeknown to the dishevelled and doleful masses were the plans of a deceitful and deranged Doctor of Doom waiting in the shadows, diligently toiling away at his despicable master plan to enshroud Doomsville in a permanent prism of dread.

This unknown Professor of Pain with a predilection for punishment, has perfected his primary ability of converting inanimate objects into precise predators to prey on the population. Preposterous as it may seem, the plans made by this Practitioner of Panic have now been let loose on this sleepy town. Peace now stands as much chance as Peter Piper picking a peck of pickled peppers…or so he thought.

Waking from his dreamless sleep, Joe Brown stretched his extremities until he felt his bones pop and clambered out of his dilapidated single bed. Looking across his jail sized room, Joe caught a glimpse of the time from his retro Casio watch, with built in calculator might I add.

Joe dived head first into a mountain of dirty laundry piled up near his bedroom door, searching for that one pair of clean pants he knew were there. Rotting food, mice faeces and cockroach larvae were sporadically sprinkled amongst the one tonne heap as if they were toppings on a caramel sundae of filth.

‘Victory!’, he exclaimed, holding up a crusty set of blue jeans that pointed upwards like a perverted Excalibur pulled from a mythical rubbish tip rock.

Three days earlier, Joe’s biological parents died in a cliché yet comical way that holds no importance to this story, forcing Joe to move in with his only living relative, his Godmother Aileen White. The unfortunate incident that claimed his parent’s lives also destroyed his family home and all his belongings. Joe was left with only his deceased Godfather’s room and clothes for comfort.

Aileen did the best she could while living on a disability pension due to a freak accident involving a pair of chopsticks and a llama. However, it was barely enough to provide for the growing fifteen-year-old boy that now lived above her in their squashed two-bedroom townhouse.

Did I mention that Joe’s biological parents died in a cliché yet comical way that holds no importance to this story? Good, just checking.

Did I also mention Joe’s house was now locked down under a large but completely irrelevant biohazard dome? Forget I mentioned it.

A voice echoed from downstairs.

“What! Not again Aileen, this isn’t fair”, pleaded Joe, for he had been ‘baconned’ again. Ever since the great bacon prank of 2015 he swore to himself it wouldn’t happen again. But here he was, salivating like a ravenous cannibalistic female praying mantis after mating, only to find a bowl of sludge in its place.

“You know we are on a tight budget little man”, Aileen screeched with a wisp of Irish youth in her frail old voice, “You’ll just have to make do with my family’s world-famous beef and squid eye porridge. Lots of protein for your growing muscles!”

Joe knew there was no beef in the porridge as he drove his jaw down on a chunk of rubbery squid eye, popping it open like a sour gelatinous egg filled with pus. The closest thing he had eaten to beef over the past three days was a can of Doomsville’s finest home brand cat mince.

Joe knew better than to push the matter further with Aileen. She may be nearing sixty-three years old and have a spine so curved she could see yesterday, but with one flick of that tea towel she keeps tucked in her armpit high pants and she would turn Joe into a Julia very quickly.

Aileen held a dripping black garbage bag out for Joe which was two evolutionary steps away from forming its own consciousness. “And when your done there Joey my boy, put this rubbish bag in the dumpster would you dear?”

“Ughh”, sighed Joe, snapping out of his daydream about his parents and pushing it to the back of his mind once again.

“Yeah alright, but then I’m out of here for the day”, Joe stated as firmly as he could, while at the same time protecting his privates from a tea towel rapture just in case. Sure, he would lose a finger or two, but it was a price he was willing to pay.

Aileen raised a suspicious brow so high that it migrated from her face and became a citizen of her ever-growing back hair, “Ok, you have a deal. But only because it’s the weekend, and I don’t want you moping around the house feeling sorry for yourself. Your parents wouldn’t want that!”

Extending her reptilian shaped hand in Joe’s direction with all five fingers facing in ten different directions, he knew exactly what this meant for him.

The crusty kiss of death!

Her stained hand appeared unwashed since birth, with warts growing on warts creating a porous honeycomb of viral paradise for dirt and grime to bathe in. Hair attached to several moles across her palm were so long they were platted together in dreadlocks, and her skin was riddled with pustules that had reservoirs of oil deep enough to run a small car.

‘Enough of the pleasantries’, Joe told himself, building the courage to do what needed to be done.

Joe puckered his squid lips together and closed his eyes tighter than a squirrel grasping its last nut. Leaning forward he felt his lips break ground with Aileen’s alien hand, surface craters and all. He lingered for a second. Any less and Aileen’s other, even more disfigured hand would replace it for round two.

Appearing satisfied that Joe had met her disturbing ritualistic expectations, Aileen raised her chin upwards in an approving gesture. Although from Joe’s perspective, standing at least six inches above this five-foot dwarf of a woman, it looked more like a one-hundred-year-old turtle with a misaligned jaw trying to lick its own nose.