You are here: Home / Fiction / Mystery/Suspense / Time To Kill by D. M. Baillie 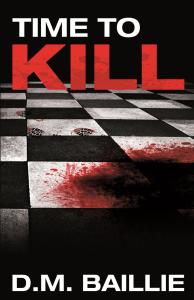 When a dark malevolent figure returns from Ethan Dunn’s past, he lashes out and kills him in a fit of blind rage. Who is this mysterious character? Why did he kill him? What will he do next? The first killing thrusts Ethan on a journey to some very dark places, places he thought he had truly escaped from, long forgotten in the past. To survive, Ethan must relive his past to discover the truth behind it all, revealing the evil still lurking. Will the past be repeated, only time will tell…

After completing the first few chapters I became distracted by other things but would always come back to it. Eventually I got it finished and then the hard work really started.

How Did You Come up With Your Characters?
In my two novels my main character has been male, with one guy in his late 20’s and the other in his early forties. I build an idea of what they would look like in my head, noting down personal features, like scars that make them more personable, like they have lived life a bit. Then the character grows the more I write.

As for the other protagonists, I have images of them in my mind, whether they will be a love interest, a bad guy etc. I am also influenced by real life people, in fact one of my characters in my second novel, Zero Hour, is based on a Pro Rock Climber, cause I was inspired by her drive to succeed.

Book Sample
Deep red liquid soaked through the immaculate white t-shirt. He could feel the blood, warm, against his skin. Looking down at his hands all he could see was the thick, almost black fluid which stained them. Wipe. Still it would not go. Wipe. A bead of sweat trickled down past his temple. The cooling sweat was refreshing against his fiery red-hot skin. It was warm that day, the sun high in the sky piercing everything it touched. The asphalt outside was softening under the baking heat of the bright yellow sun.
Quickly he closed the door. Fumbling for his keys, he stood there, trembling, the adrenalin pumping through his veins. Time was passing. He had to act quickly. Finally he squeezed his assortment of keys out. He flicked through the metal, the keys clicking together as he searched ruthlessly. Found it. The lock shuddered as it clunked shut. He slammed another key into a box next to the door. The loud whirr of the motorized shutter filled his ears as it thundered down.

Looking back from the door, the shop looked deserted. There was not a soul in it apart from him. His shadow cast against the shiny checkerboard floor, dark, black. Rows of shelves, stacked floor to shoulder height, lined the store aisles. There were items strewn about in different locations, peppering the floor. He stood at the door, staring, waiting, thinking. His mind raced.

He had to act fast.

He purposefully stalked towards the rear of the store. Bloody footprints bright red under his dark shadow. Closer to the rear of the store, the footprints disappeared under a pool of dark red blood. It slowly oozed towards him. His breathing quickened, sharp shallow breaths of life giving air. More sweat built upon his brow. Wipe. The sweat was gone but the heat was overwhelming, it wasn’t long before he wiped his brow again. The cold lifeless body lay there.

About the Author:
D.M. Baillie is a young Scottish novelist originally from Glasgow. His first novel Time To Kill, was published in late 2012, a crime thriller about a young man faced with drastic choices for something that happened in his mysterious past. His second novel, Zero Hour, is due for release on the 20th October 2014, a post apocalyptic story of a man trying to walk across the USA after a devastating nuclear attack.

Some of D.M. Baillie’s favourite authors include James Patterson, Chris Ryan, Terry Goodkind, J.K. Rowling and George R.R. Martin. A graduate from the University of Glasgow, D.M. Baillie has spent over ten years in the Aerospace Industry and has worked on various Aircraft Projects. Also an avid lover of outdoor pursuits such as rock climbing, gives him inspiration to create hair raising, thrilling novels that take you on a rollercoaster ride from start to finish.