You are here: Home / Bargains and Freebies / Bargain Books Under $3 / Threshold by Scott Falcon 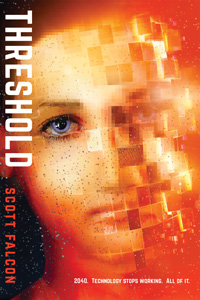 2040…VENTURA CALIFORNIA:
Becca Wilde, a terminally ill teenage autistic savant, senses a presence—an intelligence—in The STREAM, the virtual reality entertainment phenomenon created by her tech-billionaire father.
She believes the intelligence can create a cure, but her father intends to use radical technology. They are running out of time.
Then technology stops working.
All of it.
No Internet. No screens. Not even cars. But one thing is working—a Russian A.I. that mutated—and is now In the Wild.
Becca may hold the key to the future. Any future. If there is going to be one.
But…only if she can communicate with a super-intelligence—that hasn’t been invented yet.

What Inspired You to Write Your Book?
The advent of artificial intelligence in the near future. The risk of a hacking AI mutating. The race for the Singularity by tech conglomerates and governments.

How Did You Come up With Your Characters?
How a maverick tech billionaire uses technology to save his daughters life in the midst of the AI race.

I do not see you now but yet I feel

Both palms on Becca's chest, Jerrod, a surfer type, pumped chest compressions. Becca sprawled on the floor in one of the simulations rooms at RadNtel, a technology company in Ventura, California.
"You're there," Becca said. "You're there."
Her eyes glassed over and rolled to the back of her head.
"Eleven, twelve, thirteen, fourteen, fifteen," Jerrod said as he continued CPR.
He pressed her cheeks, covered her mouth with his, and exhaled hard, twice, then resumed chest compressions.
"Breathe, Becca, breathe," he said