You are here: Home / Fiction / Romance / This Time For Keeps by Jill Blake @Jill_Blake_ 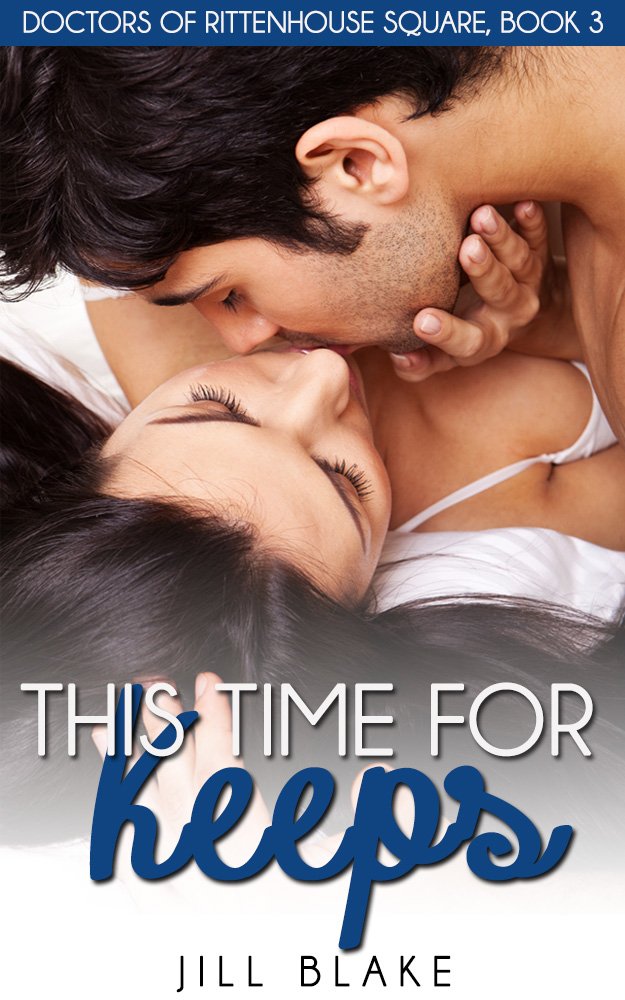 A random act of violence…

A second chance at love…

But sometimes the past can be hard to let go of, especially when old flame Luca Santoro reappears in her life and decides he wants to start over…this time, for keeps.

What Inspired You to Write Your Book?
You can’t escape it: we live in a violent world. Open a paper, turn on the news, and there it is. Another shooting, or stabbing, or bombing. At school, at the mall, at a political rally, at a medical office.

In this third book of the Doctors of Rittenhouse Square trilogy, Dr. Isabelle DiStefano falls victim to a random act of violence. Facing what is every doctor’s nightmare, she suffers a career-ending injury. With the help of family, friends, and an old flame who re-emerges from her past, Isabelle struggles to rebuild her life.

Set against the backdrop of old Philadelphia and Italy’s Amalfi coast, with a rich cast of supporting characters (whom readers may recall from the first two books of the series), This Time for Keeps is a story about love, second chances, and the triumph of the human spirit.

How Did You Come up With Your Characters?
Isabelle DiStefano was first introduced in Pursued by the Playboy, Book 1 of the Doctors of Rittenhouse Square trilogy, as the younger sister of the hero, Marc DiStefano. Isabelle’s friend, Sam Winters, was the heroine of Taking a Chance, Book 2 in the series. Here, in the third book, we see several of the characters who made appearances in the previous books. Despite the overlap, each story is self-contained and can be read as a stand-alone. While the characters may have started as an amalgam of many of the people I’ve known over the years, they took on a life of their own when I started asking: what if?

Book Sample
Isabelle DiStefano closed her eyes and pressed the sweating glass of Long Island Iced Tea to her forehead. The throbbing techno-beat and pulsing strobe lights did nothing to ease her headache. Maybe arranging this ladies’ night jaunt to a strip club—or male revue, according to the website—hadn’t been the smartest thing she’d ever done.

At the time when she’d made the reservations, she’d thought it would be a blast. Worth it just to see the bride-to-be’s expression when she realized what was in store for the night.

So when Samantha, the maid of honor, had given her free reign in planning a bachelorette party, Isabelle had of course tried to live up to her reputation for outrageousness. After all, they had the rest of the weekend to enjoy sedate pre-wedding activities like the spa day Sam had arranged, and an elegant rehearsal dinner at Moonstone Manor, where the wedding itself was to take place in two days.
Except things hadn’t gone as planned. First, Isabelle got delayed at work with an emergency C-section. By the time she’d tucked her pre-eclamptic patient in for the night and signed out to the on-call physician, it was past eight.

Then her trusty little Prius failed to start. It took another twenty minutes and some light flirting with the AAA driver to get a jump start and be on her way—only to get bogged down in traffic that turned her usual ten-minute commute home into thirty.

She texted her friends to begin the evening without her. No point in Jane and Sam losing out on reservations to the much-touted Vetri just because Isabelle was running late. She’d pick them up after dinner in a cab.

She showered in record time, slipped into a halter-neck dress and heels, pulled back her unruly hair, and slicked on some lipstick. Her stomach growled, thanks to another day of working through lunch. Just one more black mark against the new and amazingly inefficient electronic medical record that the hospital had forced on its staff. Ignoring her hunger, she figured she’d grab some food at the club before the show. Too bad no one had bothered to inform her ahead of time that the kitchen closed at eleven, and all that was available were watered-down drinks and phallic-shaped pretzels.

And to top it all off, Jane had merely lifted an eyebrow when they’d pulled up in front of the black-canopied entrance around the corner from the main gentlemen’s club. As if this were something she did on a daily basis.

“Want to try out the hot seat?” Isabelle prodded, once they were settled into a booth close to the stage. Men with ripped pecs and abs gyrated in various degrees of undress beneath the spotlights.

Jane quirked her lips in a half-smile. “Sure, Izzy. After you.”

Samantha eyed the man closest to their table. “You think they know what anabolic steroids do to the heart?”

Isabelle shook her head. Leave it to ever-practical Sam to look past the eye-candy and see medication side effects. It was a wonder she’d managed to snag a major hottie for a husband. Then again, Alex Kane wasn’t an easy man to ignore.

A waiter approached to take their drink orders. Isabelle eyed the man’s outfit—black bow tie, gleaming bare chest framed in black suspenders, tuxedo pants cut a little too snug in the crotch—and remembered the other reason she’d chosen this venue.

For someone who’d deliberately cultivated a reputation as a party girl, Isabelle’s life these days was remarkably staid. The only memento of her rebellious college years was the tattoo of a miniature asklepian she sported on her left hip. Somehow the desire to shock had been overtaken by the desire to succeed, to prove to herself and her family that she, like the rest of the DiStefanos, was no slouch in the brains department. And besides, who had time in med school and residency to do anything but study and work?

As for life after residency, between office hours, OR time, hospital rounds, supervising residents and medical students, serving on various hospital committees, and volunteering at an off-site free clinic, she was lucky if she had enough time to grab a sandwich in the cafeteria and a quick shower in the L&D locker room.

Which was why, she supposed, her social calendar was so empty. In fact, these gym-sculpted, testosterone-enhanced entertainers were the closest she’d been to an almost-naked male since….
She thought back. Was it really four years? Her senior resident, when she’d been a lowly intern. Twelve months of frantic fumblings in the call room, hurried couplings squeezed between endless hospital shifts and meals eaten on the run. And then…nothing. A long dry spell of living vicariously through her friends, as they paired off, one by one.

Samantha’s wedding three months earlier had been small, intimate, with just a few close friends and family in attendance. Beautiful, despite the rushed preparations and surrounding media frenzy. It wasn’t every day that the last bachelor on Fortune magazine’s “Forty under Forty” list got married. But the furor eventually died down, and now it was Jane’s turn.

Unlike Sam and Alex, who’d gone from first meeting to exchange of rings within two months, Jane and Ross had been engaged for ages. They’d reserved the wedding venue a couple years ago: a bucolic twenty-five acre estate two hours west of Philadelphia. Extended family from both sides were gathering for a reunion and wedding rolled into one, with festivities lasting through the Labor Day weekend.
For Isabelle, the wedding was another reminder of what she had yet to attain. As if her job wasn’t enough of a reminder. She was an obstetrician, constantly surrounded by evidence other people’s happiness. Every day was filled with women, their husbands or boyfriends in tow, basking in glowing pregnancies, popping out perfect babies to round out their perfect lives.

Lately, it seemed everyone in the world had someone. Everyone except Isabelle.

To hell with that. She gulped down the rest of her drink and flagged down their waiter for a refill. She was here to have fun, damn it.