You are here: Home / Fiction / Fantasy / Thirty Seconds To Die by S.G. Holster 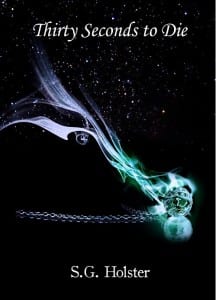 Lexi Flynn thought she could hide from her dreams.

She thought her fears were all in her imagination.

She couldn’t imagine that after everything she’d been through, she could fall in love.

An ancient society, one extraordinary letter, and the secret Alexandra Flynn would die for – again – to protect.

For Alexandra, life had always been – normal. But it only took one moment to change everything.

Her life quickly becomes the opposite of normal when Ren Miller moves to the small community where she lives. Mysterious, handsome, and dangerously charming, Lexi discovers Ren is no stranger. They’ve met before – in another life.

When Ren pulls her into his bizarre world of past lives and secret societies, all bets are off. They become the targets of the Sentori, an ancient, secret society who believes it must protect the sanctity humankind by killing those like Lexi and Ren, those who are reborn.

In an effort to protect Ren from the Sentori, Lexi is forced to enlist the aid of the most unlikely of all allies. Her decision ignites a series of events that lead to a heartbreaking decision and a devastating conclusion.

If your life was all you had to give, wouldn’t you give it to save the only person you ever loved?

THIRTY SECONDS TO DIE draws the reader deeply into a story of danger and flight, of love and hate, and of the extraordinary power of the spirit – human or otherwise.

How is Writing In Your Genre Different from Others?

What Advice Would You Give Aspiring Writers?
Stop Running Away, Stop Stopping, Stop Writing In Someone Else’s Voice, Stop Worrying, Stop Hurrying, Stop Waiting, Stop Thinking It Should Be Easier, Stop The Moping And The Whining, Stop Blaming Everyone Else, Stop Playing It Safe, Stop Writing For “The Market”, Stop Caring About What Other Writers Are Doing, Stop Caring So Much About The Publishing Industry, Stop Leaving Yourself Off The Page, Stop Being Afraid.

Write from your heart. Write something people will remember.

Author Bio:
S.G. Holster lives in California with her husband and their two daughters. She released her debut novel, Thirty Seconds To Die, in January 2013 and the follow-up novel will be released in Summer 2013.

What Inspired You to Write Your Book?
Once I had the idea in my mind the story really took on a life of its own and consumed a huge part of my time, working on it whenever I could find time. I was constantly creating it. It was just fun for me to see what would happen next and even though I wasn’t intending to publish, I wanted my characters to live on.