You are here: Home / Fiction / Horror / Thirteen: The Horror Collection by Louise Lake 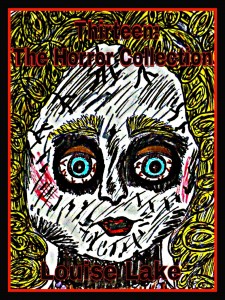 Thirteen: The Horror Collection is a collection of thirteen short horror stories with vampires, werewolves, zombies, an antique doll, aliens, a demon, witches, the devil, mermaids, a puppet clown and a deadly infection. WARNING: READ AFTER DARK!

The Antique Doll: A witch curses her daughter to be imprisoned inside the body of a pot doll. But after one hundred years on the night of a full moon, the curse can only be lifted by forcing another to take her place…

Dancing with The Dead: The story of young high school student Darcy, who is eagerly awaiting her prom night, little does she know that prom gives her far more than she bargained for…

Flesh and Blood: The hard life of a young orphaned girl, who has always wanted to be part of a family. Only the family are hiding a sinister secret that makes her wish that she was still an orphan…

Fresh Flesh: One the night of a meteor shower, spectators watch in suspense as the rocks collide with the earth beneath their feet. When aliens appear from the rocks, one man receives something he never expected…

The Music Box: The haunting tale of a demon that can’t seem to let go…

The Puppet Clown: After the death of his father, a ventriloquist attends a car boot sale where he gets far more than the price he paid…

The Amulet: The tale of a young man, who, after his grandfather’s funeral, discovers an amulet that holds the power of time travel. In search of a cure for his dying mother, he soon discovers that altering time has its consequences…

The Chalice: The story of a thief who steals an ancient chalice, belonging to the ancestors of a powerful witch. He is later taught that you should never steal what you do not understand…

Wormhole to Hell: Giving a whole new meaning to the term: pub crawl. When a group of friends on a lads night out, decide to check out Lucifer’s bar…

The Pack: Tells the story of the book worm and science fanatic Paige Turner. Paige has never had a friend until now, and she is soon to discover why…

Halloween Town: A horror writer seeks inspiration in a town where nothing is as it seems. On Halloween night the town’s people shed their skins, giving our writer far more inspiration than he ever wanted…

The Sirens Song: After the disappearance of his fisherman father, a lawyer returns to the sea in search of him. A storm brews as he fights for survival. Only to end up stranded on an island full of beautiful seductive women, who are not what, they seem…

Rage: The government block a small town from the rest of civilisation, after an industrial explosion turns the towns people into rage fuelled lunatics, while one woman fights for survival. Is there any way out of the rage cage…

What Inspired You to Write Your Book?
My love for short horror stories inspired me to write this book. I have always enjoyed reading short horror stories since I was a child and after coming up with a few ideas I decided I would expand those ideas to create Thirteen: The Horror Collection.

Inside she waits silently
One hundred years
To be set free