You are here: Home / Fiction / Mystery/Suspense / The Yankee Club by Michael Murphy 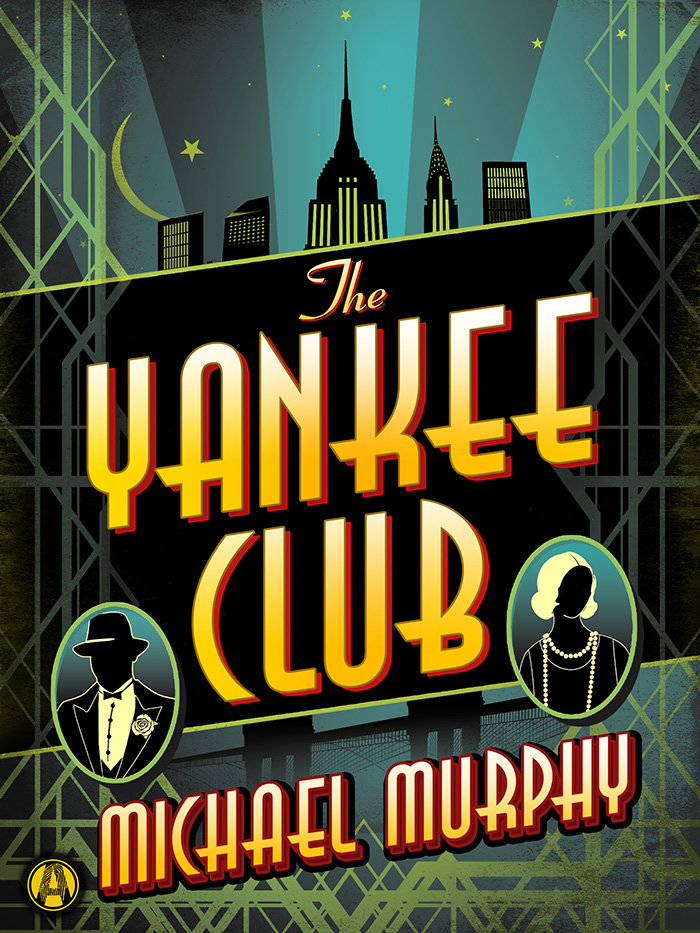 In Michael Murphy’s action-packed Prohibition-era novel of suspense, a mystery writer returns to the bright lights and dark alleys of New York City—uncovering a criminal conspiracy of terrifying proportions.

In 1933, America is at a crossroads: Prohibition will soon be history, organized crime is rampant, and President Roosevelt promises to combat the Great Depression with a New Deal. In these uncertain times, former-Pinkerton-detective-turned-bestselling-author Jake Donovan is beckoned home to Manhattan. He has made good money as the creator of dashing gumshoe Blackie Doyle, but the price of success was Laura Wilson, the woman he left behind. Now a Broadway star, Laura is engaged to a millionaire banker—and waltzing into a dangerous trap.

Before Jake can win Laura back, he’s nearly killed—and his former partner is shot dead—after a visit to the Yankee Club, a speakeasy dive in their old Queens neighborhood. Suddenly Jake and Laura are plunged into a conspiracy that runs afoul of gangsters, sweeping from New York’s private clubs to the halls of corporate power and to the White House itself. Brushing shoulders with the likes of Dashiell Hammett, Cole Porter, and Babe Ruth, Jake struggles to expose an inconspicuous organization hidden in plain sight, one determined to undermine the president and change the country forever.

What Inspired You to Write Your Book?
The Thin Man movies with William Powell and Myrna Loy inspired me to write a Prohibition-era mystery series that offers the mystery, wit and sophistication of the movies.

How Did You Come up With Your Characters?
Jake is inspired by Dashiell Hammett who wrote The Thin Man. Like Hammett, Jake is a former Pinkerton detective turned mystery writer. Laura Wilson, a successful Broadway actress was inspired by a friend of mine, actress Jane Johnson.

Book Sample
Gino’s face flushed. He reached into the tray, grabbed a one dollar cigar and stuffed it into his suit coat pocket. He tossed a five dollar bill onto the tray.
“A Lincoln. Thanks, Gino.” She headed for the bar.
“She’s got a nice caboose, but she don’t seem to realize we’re in the middle of a depression here.” Gino ruffled my hair. “You come to your senses and moving back or just paying a visit?”
“Business.”
“Book writing business.” Gino smirked.
I considered explaining the content issues with my publisher that couldn’t be fixed over the phone, but he and Frankie didn’t seem too interested in publishing problems.
Gino slipped a silver case from his suit coat pocket and offered me a cigarette. I shook my head, and he nodded. “That’s right. You never was a smoker. You never drank too much or chased dames, except for Laura. Remind me again why we’re friends.”
Frankie removed a Camel and lit it with a match then held the flame for Gino. Gino lit a cigarette, took a deep drag and blew out a long cloud of smoke. “So, Jake, how’s life in Tampa playing shuffleboard with all the old folks?”
I laughed and explained how Tampa was everything I hoped it would be. Mildred was right. The city gave me a fresh start and allowed me to focus on writing. I described the apartment that overlooked the ocean, small but functional for a man who spent half his days in front of a typewriter.
Gino flicked cigarette ash into the ashtray. “You made it big, you lucky bastard.”
The cigarette girl returned with a bottle of Scotch and three glasses. She set them on the table then turned on her heel and flirted with a customer a couple of tables over.
Gino’s flicker of irritation told me the girl meant something to him. He filled the glasses half full and raised one in a toast. “To lucky bastards.”
The three of us drank, then Gino asked the question I knew he’d get around to asking. “You seen Laura?”
“On a billboard outside.”
“Wise ass.” Gino shook his head. “It’s a shame. I always thought you two were destined to be together forever. You know, like Romeo and Juliet or something.”
“They ended up dead.”
“You sure?” Gino ran a hand over his slick black hair. “That’s right. Now I remember. You paid attention in class while I was out schooling the ladies.”