You are here: Home / Fiction / Science Fiction / The World Next Door by Maegan Cook 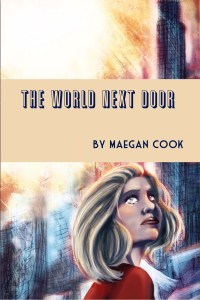 “This is the Way the World Ends…”

In a world so similar, yet different from our own, the year is 1947; and a war in Europe has been raging for over a decade…

In Silver City, Tanya Grey is facing the end of life as she knows it— her mother’s run off, the rent is due, and she has only one way to survive on her own… by selling herself to the highest bidder.

Leonard Stevens is also facing his own personal apocalypse, at the bottom of a bourbon glass. His life lays in shambles in the wake of his wife’s infidelity and abandonment.

Little do either of these sad souls know, that a real doomsday is actually right around the corner…

What Inspired You to Write Your Book?
This is actually based off of a very vivid dream I had one night about the destruction of the world. Several scenes are either from the dream verbatim or very close; it did take a little research and filling out the characters to translate the ideas into a story to share.

How Did You Come up With Your Characters?
I designed the character of Tanya from the girl in my dream the book is based off of; Leo was a bit harder. Other than knowing he had a marriage that had soured and he was a scientist, I had little to go on for his appearance or personality… so I injected quite a bit of nobility into him to round him out, and he evolved through the drafts of his scene.

Book Sample
His eyes opened, squinting against the glare of the morning light glinting off the golden band just a few inches from his face. With a groan he lifted his head from the kitchen table, the half-empty bottle of whiskey taunting him as his head began to pound. He cradled his aching head and tried to remember how he wound up sleeping at the kitchen table. Through blurry vision, the lined-paper acting as a bottle coaster caught his attention. He clumsily moved the bottle away, bringing the paper closer, and tried to decipher the familiar scrawled handwriting.