You are here: Home / Fiction / Mystery/Suspense / The Wind Guardian by Frank Scozzari 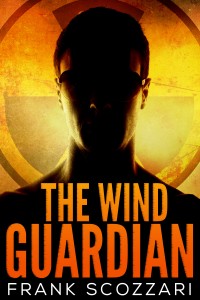 The ultimate threats facing United States come to life in Frank Scozzari’s fast-paced thriller. With the help of an inside man, a group of determined terrorists siege a nuclear power plant, intending to spread radiation and wreak destruction into the world. The only thing standing in their way are two misfit security guards, who return to their posts and realize what is happening in the power plant. The two soon find themselves in a battle against time and odds, as the terrorists facing them will stop at nothing to accomplish their goals.

The Wind Guardian exposes the vulnerability of a terrorist attack on one of our nation’s nuclear power plants, written from an insider’s perspective.

What Inspired You to Write Your Book?
Having once worked at a nuclear power plant, I was always interested in writing a novel about it; mainly about the potential of a terrorist attack. I learned that the wind conditions would determine the extent of damage cause by a nuclear mishap, and thus the title, ‘The Wind Guardian.’ Slowly over time the story formed in my head, and finally I had it all, sat down, and wrote it.

How Did You Come up With Your Characters?
The main characters, Cameron and Grace, are a product of the plot. Once the plot was developed and I know the main actors, I started writing,. The more I wrote the characters took form. Soon they were speaking to me and I followed their lead.

Book Sample
He had longed for killing. He had wanted so much to spill the blood of Americans, and to do it on their own soil as they had spilled the blood of his people and his ancestors. Too often, he thought, the battles were fought on their land, far removed from the American conscious and from their media’s deceitful eye. To bring this war to them; to the land of the Westerners, was more than pleasing, Ramzan thought. It was prophetic.

With his pack loaded, Ramzan zipped open the rear flap and removed a piece of paper. Unfolding it, he held it in the faint light just outside the shadows. It revealed a detailed diagram of the Plant, with notes in Arabic scribbled in its borders. A blue, felt-pen line traced the path they would take from the ocean-side of the perimeter fence to a doorway at the southernmost end of the Turbine Building. Another path drawn in red denoted their return route. Where the two lines met on the far south side of the Auxiliary Building, was marked boldly by two simple red X’s—the target points.

Here we will bring down this monster, Ramzan thought.

Like cutting the throat of a massive goat, the precious cooling water would spill out onto the blacktop as blood would run. And what pleasure it would be watching this goat die; in a self-destructing, unstoppable process that he and Emil would initiate. And from its last breath would come radiation, a plague of colossal proportion which the goat itself created; airborne and ready for distribution.

Above was a steady shoreward wind. A beautiful wind, Ramzan thought, glancing skyward at it. Months of planning were finally coming to fruition. Every moment spent hiding out in dingy hotel rooms; hearing the lies told about western intervention, about bombings of militia which were bombings of villages; and the fallacies spread about his government and faith without chance for rebuttal, was about to find retribution. All of those who had suffered and who had died would now be avenged. It was their time.

Buy The Wind Guardian On Amazon