You are here: Home / *Reading Room / Featured Books / Features / The Wild & Zany Galactic Adventures of Commander Zhang & Lieutenant Simon, Soul Mates Who Incarnate on Earth and Save the World by Vegastarchild584 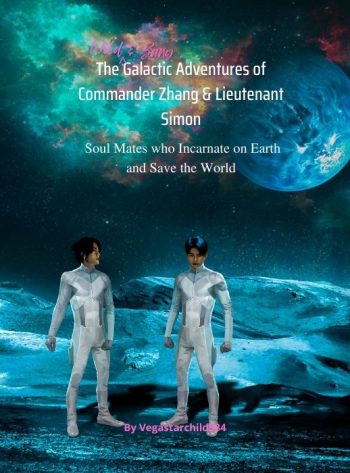 Commander Zhang (ZhangZHXO511) and Lieutenant Simon (SimonGJXO1129) are two easygoing and fun-loving Sirian Galactic Officers who also happen to be Soul Mates assigned to the Mothership Athena. Galactic adventurers, the pair travel on various assignments around the galaxy as part of the Athena’s Science and Exploration team and manage to get themselves into all sorts of quirky situations and trouble. Prior to taking some much-needed time off at the famed Retreat and Spa in Arcturus after a particularly harrowing assignment, the duo hear Gaia’s (planet Earth) clarion call for help. Bogged down from thousands of years of low vibe human shenanigans, Gaia needs a little help ascending. Being decorated officers, the duo decides to provide assistance by incarnating as earth humans as part of Mission Everlight.

Coming in as modern day handsome and popular male models/actors/singers/brand ambassadors, their mission is to reveal the very real and serious corruption within the performing arts industry in the world’s most populated and internet-savvy country – China. But what happens when only one Soul Mate wakes up and the other is still asleep?

This wildly entertaining ride through space and time is loosely based on the real-life drama of popular Chinese Actor/Singer Zhang Zhehan and his costar Actor/Model Simon Gong Jun. Chock full of spiritual wisdom, The Galactic Adventures of Commander Zhang & Lieutenant Simon is a zany, comical, M/M, BL romance, epic sci-fi adventure, and a paean song for awakening Starseeds to never forget their roots and the many gifts and abilities they bring to aid Gaia with ascending.

What Inspired You to Write Your Book?
It’s a novel that came to me to encourage and wake up Starseeds everywhere after I caught wind of young and talented actor/singer/model/deep thinker Zhang Zhehan who was blacklisted in China for something we in the US would consider innocent and ignore. As I delved more into the issue I saw how it greatly impacted the young man involved as well as all his fans around the world as well as his costar Simon Gong Jun. And I thought what if Zhang’s earth mission is to go through this but also to overcome and rise above it as a Starseed? How different would the outcome be?

How Did You Come up With Your Characters?
While a fictionalized account, my main characters are based on two real life actors and performing artists, one of which is currently being unjustly accused and dragged into a nationwide scandal with far reaching consequences for him including destroying his career and livelihood as an artist in his home country.
As his story is very compelling and impacts not only these actors, but millions of fans around the world, it inspired me to write this book about them to encourage people.