You are here: Home / Fiction / The Village Idiot Reviews 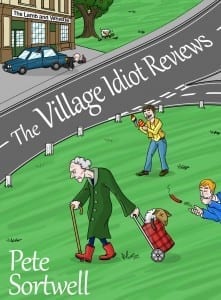 Every village has an idiot, we know that, but what if every idiot had a village, then that village turned out to be the same place all the other idiots lived? It’d be a nightmare.
Furthermore, what if all those idiots suddenly found the joys of online shopping and started telling us about them?
Well, ‘What if’ no more. Here is The Village Idiot Reviews.

Pete is 32 and lives with his wife, Lucie and their pet sofa, Jeff. He’s been writing for just over two years, they’ve been pretty eventful, well more eventful than he thought sitting on Jeff typing would be anyway.

First published in the Radgepacket anthology with a story he’d written during month five of his new hobby. Pete’s now featured, in a total of eight different anthologies and have been amongst some very fine company. Although I’ve been the best in all of them, I know that because both my Mum and Jeff told me and they’re both honest to God, Christians- possibly.