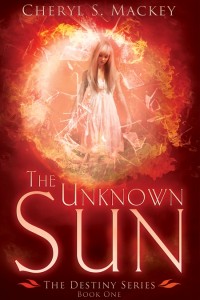 Seventeen-year-old Moira is haunted by the accidents that claimed her parents and sisters. When a strange boy who seems to know too much about her past attacks her, Moira fears death will come for her a third time. She is rescued by twins Airi and Belamar, the winged heirs to the throne in Skyfall, and taken to safety in their world.

But Skyfall is dying, and the Immortals who had protected Airi and Belamar’s world have been missing since the Great War. Moira, Airi, and Belamar must find a journal left by the twins’ deceased mother, Tanari, that tells of a prophecy that must be fulfilled to free the Immortals known as The Unknown Sun so that Skyfall can be saved.

Deeper, darker, secrets unravel around the three friends as a revolution threatens their quest and the boy who tried to destroy Moira on Earth hunts them. Tanari knew more than she had let on, and within her journal a story is more than it seems, the past foretells the future, and a far-reaching plan is unveiled.

Why did Tanari reach across time and space to entrust a simple human girl with saving Skyfall? Who are the mysterious “Four” mentioned in the journal? And why does another Immortal want her, and The Unknown Sun, dead?

What Inspired You to Write Your Book?
A dream I had at age 14. The story was so vivid and real that I NEEDED to write it. However, I knew I wasn’t ready to, wasn’t good enough yet, so I waited until the time was right.

How Did You Come up With Your Characters?
They appeared in a dream, names and all. It was pretty cool.

Book Sample
A thunderous peal from the horn draws our eyes to the north. The cloud of beating wings has regrouped, and is approaching fast. Shields and swords glitter against dark wings and armor that are still specks in the sky.
“Ready arms!” Airi’s roar shatters the tense silence. Bel stands beside her, content to let her lead their people against the rebel legion. His strength lies in defense tactics, and his face is now set with concentration as he studies the approaching horde. The field echoes with the clatters of shield and sword as they meet in a thunderous clash in answer to Airi’s call to war. Thousands of wings arch high in preparation to take to the sky.
Bel quickly snaps orders to the nearest generals and the formation of the legions shifts. Then for a long moment, everything is deathly quiet.
I hate waiting.

Buy The Unknown Sun by Cheryl S. Mackey On Amazon