You are here: Home / *Reading Room / Buyer's Guides / Buyer’s Guide: The True Story Of Kill Or Be Killed In The Real Old West by Eva Gillhouse and Frank “Pistol Pete” Eaton 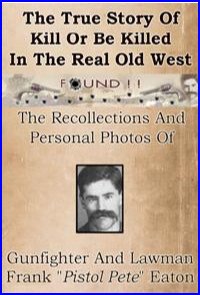 About The True Story Of Kill Or Be Killed In The Real Old West:
OLD WEST GUNFIGHTER’S FORGOTTEN MEMOIR FOUND

Long forgotten memoir by one of the most feared (yet virtually unknown today) 1870’s Old West gunfighter, hired gun regulator and lawman was recently discovered hidden away in a stage coach trunk in abandoned barn near of all places – -Disney World in modern day Florida.

This one-of-a-kind book is a time machine that takes you back and reveals the eye opening true story of what really went on in the Wild West’s: kill or be killed fast draw shootouts, hell-bent-for-leather outlaw chases, and lead dodgin’ narrow escapes.

So who was he?

His name was Frank Eaton and he was known simply as: “Pistol Pete”

Don’t be surprised if you’ve never heard of ‘em because you won’t find his name in any of today’s western history encyclopedias or glorified in movies or on TV.

But make no mistake about it – -he was one of the most feared men of his time to ever buckle on a gun rig. And he holds nothing back – -using at times what would be considered today to be “politically incorrect” language – -to tell the eye opening true story of real Old West gunfighters, dedicated lawmen and astonishingly dangerous outlaws.

“Pistol Pete” got his nickname when he was 15 years old because a family friend said he could: “Shoot the head off a snake with either hand.”

And what makes his being such a dead shot really remarkable is he was born with a crossed right eye. But, he figured out a way to hit what he was aiming at without needing to sight down the barrel.

By the time he was 16 he’d mastered a thumbed, two-gun, high hip, cross-draw so lightening fast he gunned down a local bad hombre despite the troublemaker already having his Winchester:

“Leveled, ready for business. But like a rattler, my hand went to my hip.”“Before his gun went off there were two forty-fives through his breast.” “He fell on his face on the ground with his gun under him.”

From that day forward “Pistol Pete’s” reputation as: “The boy who packed the truest and fastest guns in Indian Territory” was born. And his future as a gunfighter was sealed. He would go on to carve 11 notches on his guns.

“Pistol Pete” always lived the cowboy code of never going back on his word or backing down from a fight. And he carried his pair of loaded Colt .45 Peacemakers until he died peacefully in his bed at age 97.

“Pistol Pete’s” memoir is a unique,one-of-a-kind, detailed, handbook that vividly describes how he survived all the years of face-down-in-the-street gunfights and shootouts where the odds of him walking away alive were slim because the deadly outcome was sure to be:

“One of us will be slinging hash in hell tomorrow.”

If you’ve ever wondered what it was like to strap on a six-gun ,walk out on to a dusty street in the frontier town of Tombstone or Dodge City and have a face-off-in-the-street gunfight where only the fastest gunslinger walks away – – then this rare eyewitness account of what it was like to live and die in the Real Old West is a must read.