You are here: Home / Fiction / Action & Adventure / The Treasure of Conquistador Haven: A 21st Century Treasure Adventure by Bruce Miles 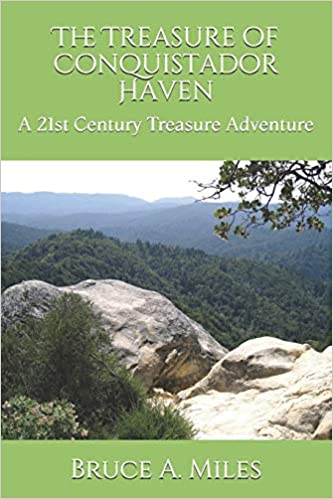 A group of college students along with a television documentary crew and a Forest Service ranger begin an exploration of a previously unsurvey part of the Ouachita National Forest in Arkansas. They soon find out the forest has more dangers than wild animals and deadly plants as they become involved in a battle between looters stealing Hernando De Soto’s fable lost treasure and outlaw marijuana growers. The unexpected meeting pits the reporter and ranger against the bad guys while trying to keep the students safe and keep themselves alive.

What Inspired You to Write Your Book?
I am an outdoor activity enthusiast and my time in the National Forests and hunting laid the foundation for this novel. The world still has lots of mysterious places and unexplored places that feed the imagination. I hope to take readers on an adventure that may inspire them to get out and experience some of the mystery and outdoor wonder themselves.

How Did You Come up With Your Characters?
My characters often are minimally based on real people whose traits I like or who have been with me when an adventure occurs. The characters, once born, grow as the story progresses and often they take on a personality as the book grows, as if they are maturing (hopefully) or growing themselves. No one character is an icon, but all are composites of some of the people I have known.

Book Sample
Joel said, “What got you interested in Botany?”
Katie leaned toward the camera as she answered, “My mother and baby brother both suffered and died from cancer. The side effects of treatment were horrible for them to endure and for me to watch them endure it. If we can find plant-based treatment options, perhaps we can reduce side effects and increase survival rates. I personally want to rid the world of opiates and the addiction they cause. There must be something in nature that alleviates severe pain and won’t cause users to become addicted.
“I am looking for signs of ancient cultivation of specific plants and plants not currently known to medical science. Conquistador records talked of plants used to cure ailments, but details are sketchy. I am also looking for rare roots, tubers, and bulbs. I am most interested in types of lichen. Lichen is the future of medicine.
“I have quite a job ahead of me and I am grateful to the university and foundations that funded this expedition. I hope they will be pleased with the discoveries I may find along the way.”
Joel said, “That was a great interview. I’ll follow-up in a couple of days.”
***
Carlos passed Esmerelda as she stopped to retie one of her shoelaces. Stopping to lean against a tree to catch his breath, Carlos looked ahead and saw a bright spot through the trees. Pushing himself away from the tree, Carlos continued toward the bright spot, stopping once he cleared the tree line. Samir joined Carlos and stopped with his mouth open.
Esmerelda joined the two men and gazed upon what they had discovered. Carlos and Samir slowly turned to look at Esmerelda, their eyes wide in wonder. Without looking at the two men, her eyes fixed on what they had found. She said, “Told you I’d find it.”