You are here: Home / Fiction / Romance / The Third Throne: Angel of Darkness by Tabitha Barret 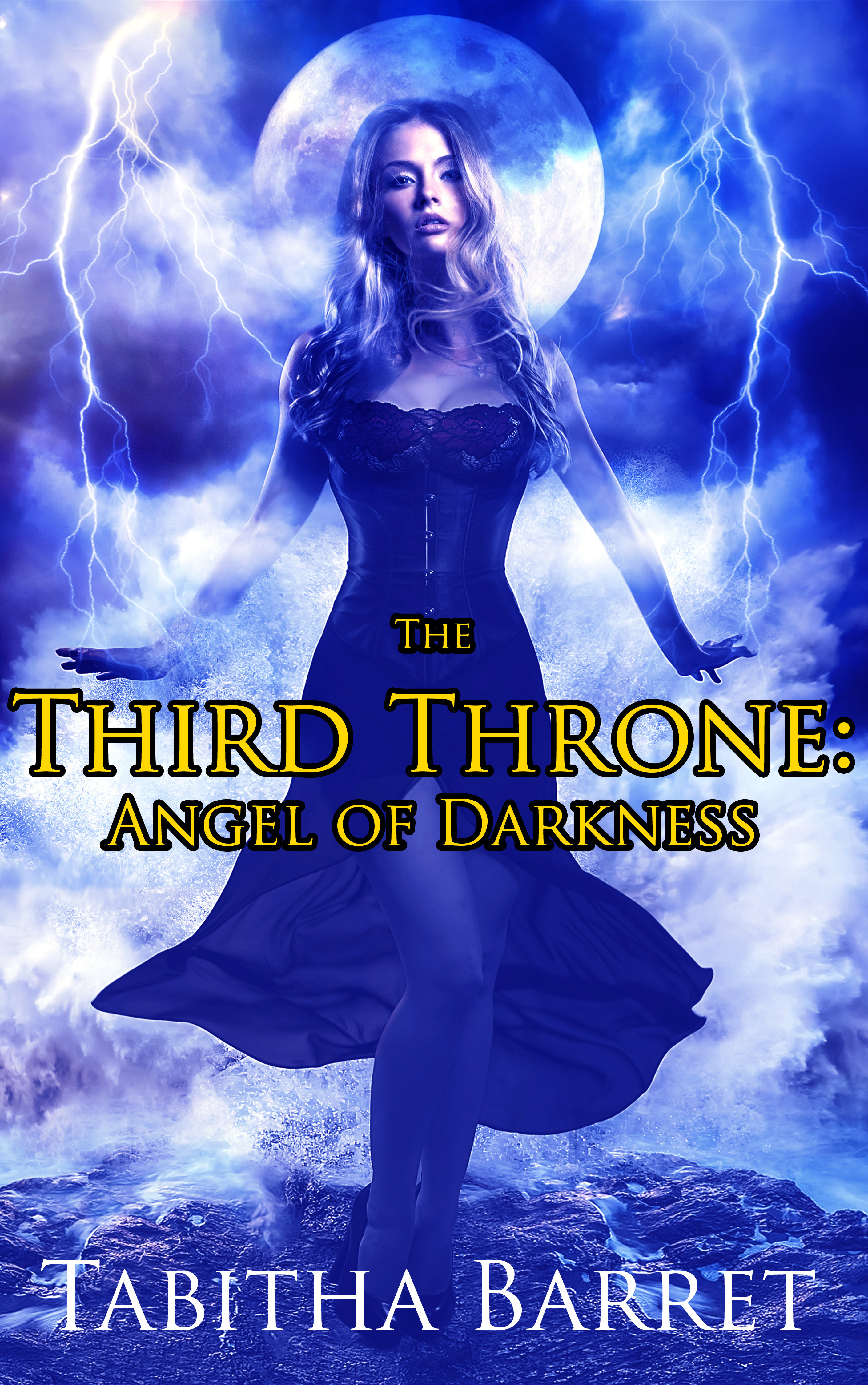 The Angel of Darkness is dangerously close to succumbing to the evil around him. There is only one woman who possess the power to tame his dark thoughts, but will her love be enough to prevent him from losing control and lashing out at the world, or will loving her lead to his downfall?

Michelle Black struggles with her strange abilities daily and is plagued by horrific dreams. Deception surrounds her as the truth of who she is and what she is destined to do is hidden from her. Thrown into a dangerous world; she doesn’t know whom she can trust. Should she believe the Angel of Darkness’ kind and loving words, or is he deceiving her so that he can use her for his own dark purposes?

The Third Throne: Angel of Darkness is the first book in the series that introduces us to Michelle Black and her dark destiny. She must fight to survive her enemies while she searches for the terrifying truth about the darkness that resides deep inside of her.

What Inspired You to Write Your Book?
Years ago, I became obsessed with the idea of a young woman that succumbs to an unknown voice in her head that pleads with her to join him. Once she makes the decision to join him, she finds out that Lucifer, the Angel of Darkness, is the one who called to her. He tells her that a deal had been made long ago and that she is now his servant. He hands her a black gown and expects her to stay with him in Hell. I couldn’t get the idea out of my head. For years, I would go back to my main characters and expand on the story. Over time, I gave the woman a greater purpose and had enough details and characters to write a series. It was strange finally writing down all of my “mini stories” and combining them into a larger narrative. I decided very quickly that I needed 12 books to complete the story and started outlining each of the books.

How Did You Come up With Your Characters?
I had started a draft of my story in college that incorporated fantasy type characters like trolls and goblins, until I realized that I wasn’t very good at writing about those types of creatures. I gave up on writing the story and let the characters run free in my head for a very long time. I figured out along the way that I’m better at dealing with humans, or “mortals”, and paranormal creatures like vampires and werewolves. Their motivations are easier to understand than trolls or goblins.

While the core of my characters are angels, all of them have serious flaws or personal issues. I created different types of angels for different jobs. My Fallen Angels punish the wicked in Hell. My Celestial Warriors fight the enemies of Heaven. Forgotten Angels have turned their backs on Heaven. Rogue Angels actively seek to destroy Heaven. Though their title or job description may dictate their actions, it doesn’t always define their personalities. I give each character their own motivation and personality traits, rather than a group mentality. There are few characters that are completely good, or completely evil. I try to create complex characters based on the kind of person I need for my story.

As I created a new storyline in my head, I added a character based on things that interested me. For example, I added a paranormal investigator because of my interest in ghosts and the afterlife. I created a “demon” hunter because guys with guns hunting monsters are sexy.

Sometimes I create characters by accident, though they tend to be the ones that surprise me the most. Two characters were invented simply because another character mentioned that the Hall of Mirrors had once been occupied by someone else. I had no idea that this was true. An idea that came out of nowhere lead to the creation of two fantastically complex characters that changed the course of the series.

Book Sample
It took a moment for her eyes to focus but when they did, she saw the familiar flickering shadows on the walls from the firelight. It was strangely comforting after seeing nothing but darkness.
Darkness? What was it about darkness that should concern her?
It suddenly dawned on her that the fire looked like it was reaching toward her instead of climbing high into the sky.
That’s not normal, she mused.
She realized with a start that she was lying on her side on the floor and staring at the reflection of the fire on the black marble. She carefully picked up her head and tried to sit up. That’s when she noticed the soot covered black boots on the marble dais.
“I was wondering how long it would take for Sleeping Beauty to wake up,” the man wearing the black boots chuckled.
Michelle carefully sat up, trying to take in everything as she looked around the room. She recognized the Throne Room, which meant that she was not only in Hell, but also at the top of the middle tower in the castle. She had never been in the other two towers. The room had curved black stone walls and a black marble multitiered dais, which was the focal point of the room. Behind the dais was a large roaring fireplace that extended to the edges of the dais.
The scones on the walls that lit the rest of the windowless tower revealed nothing new in the room. The three thrones sat upon the dais, just as she had seen before. The two thrones on the lower platform were different from each other, but both appeared uncomfortable. The one on her left was made of black metal with a seat back that resembled a shape of a shield. The metal was ornately carved with branches, though it had no distinguishable markings, aside from squiggles and swirls around the branches. The throne to her right had been carved out of a solid block of black marble. It had a high back, but no armrests.
Upon the highest platform sat the Skull Throne made of metal holding three skulls in place, one at the top of the throne and the other two at the ends of the armrests. The top skull had rubies for eyes. It was a typical sight. What was out of place was the man sitting in the Skull Throne, looking at her with a mix of curiosity and amusement. He smirked at her from the throne, looking regal, and yet sinister. She had never seen anyone sitting in the thrones before.
She forced herself to look at the man, though something told her that she should probably run. He was more handsome than beautiful but had a cruel, cold look to him, especially as the firelight flickered across his face. He had shoulder length wavy brown hair and brown, almost black eyes. He had the beginnings of a beard though it had probably only been a day or two since he’d last shaved. He was dressed in a tight black button-down shirt and leather pants. She had never seen him before, despite all her visits to Hell, so it took longer than it should have to connect all the pieces.
“Lucifer,” she whispered, afraid that saying his name aloud would make him real.
Holy crap, she wasn’t crazy after all. After so many years of being afraid that people would think she was nuts, she was finally vindicated, not that it made her feel any better. Crazy or sane, she was sitting in Hell, the real one.
“So you do know me. I was starting to wonder. The mortals have so many different versions of what they consider to be the devil, yet not all of them are actually based on me. Their stories and fables speak of a creature who tempts people to do wrong; unfortunately, they don’t have their facts straight. I am, however, the ruler of Hell. You can probably get off the floor now, unless you enjoy sitting at my feet,” he smirked wickedly.
Michelle rose to her feet and found that she was wearing the light pink pajamas that she hated, which looked very out of place in the morbid room. She looked like she had been killed during a slumber party gone horribly wrong. In her dreams, she wore her normal clothes. She glared at Lucifer, embarrassed that she was wearing nothing but her PJs.
“Oh don’t look at me, my precious pink petunia. I certainly didn’t put you in that frilly thing. I had no idea that you would be wearing that when you arrived,” Lucifer chuckled at her misfortune.
That laugh. The world froze and Michelle’s insides turned to ice. Her hope that this was simply another dream vanished when she realized that Lucifer was the voice inside her head. How stupid could she have been?
No, she had never seen Lucifer in all the years she’d dreamed of what she assumed was Hell. She’d watched people being tortured and seen the punishers torturing them. She had even overheard some of the names of the punishers, yet she had neither seen, nor heard mention of Lucifer. On some level, she truly believed it was her subconscious trying to convince her that she was insane. Years ago, she had decided that Lucifer or the devil didn’t really exist. He was a story made up to scare people into being good. Sadly, it seemed that she was very wrong.