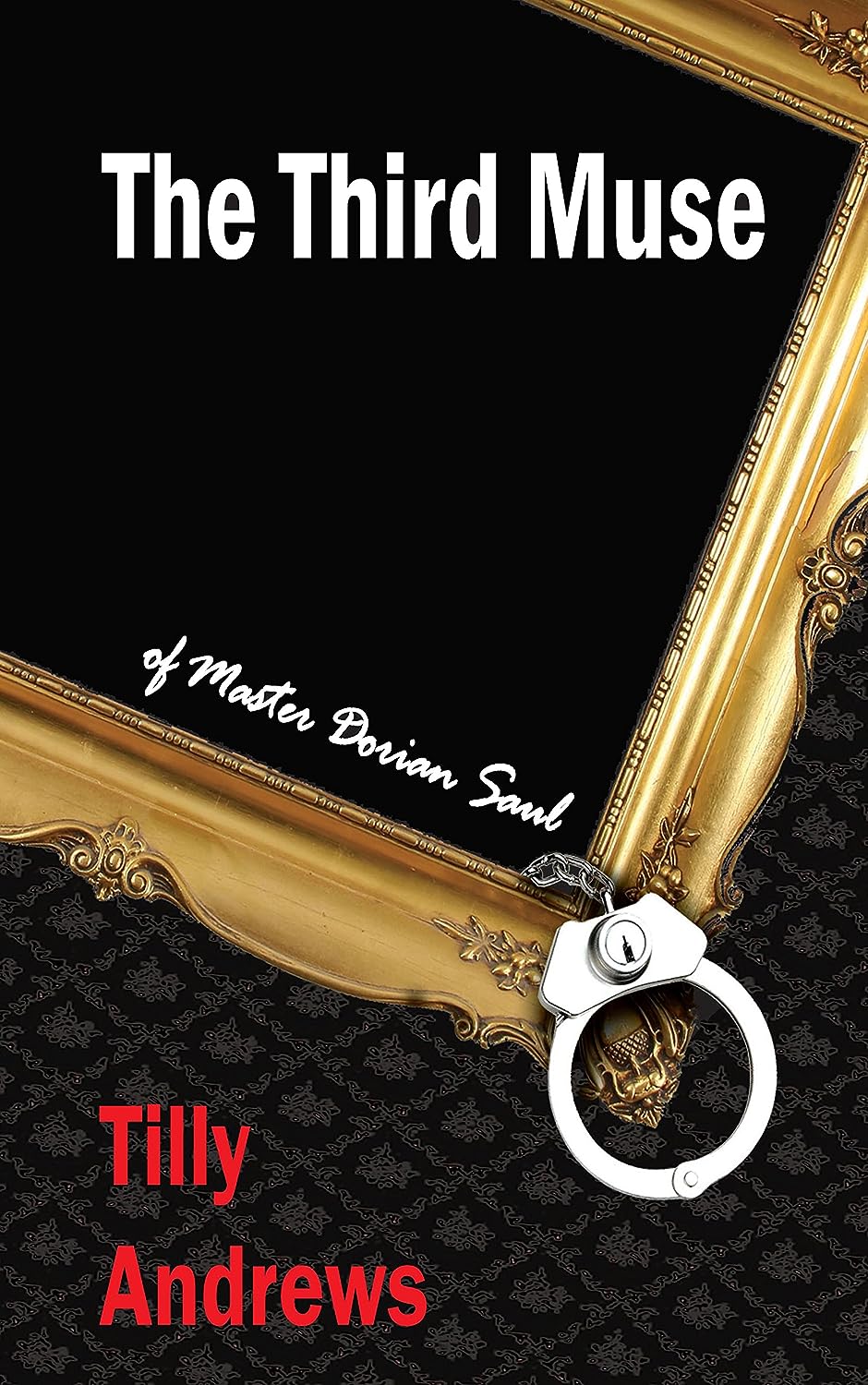 Dorian Saul is a man who is at risk of losing everything. To secure his future Dorian has to finish the masterpiece his father started over 20 years ago, but there’s a problem. Dorian is an artist who has got to know his models intimately before he can capture them on canvas, but Dorian is a connoisseur of dark delights and has a very particular taste in women. The muses Dorian requires are a rarity, and with time running out he has to find seven further women before the Saul family inheritance is lost forever.

Carla is a divorcee and a runaway. Slightly overweight, 32 years old and lacking in confidence she is surprised when her sultry new neighbour Suzie recommends that takes a job as an artist’s muse.

Adam is a successful lawyer and he is also Dorian’s brother. Adam has a vested interest in the completion of the Dorian’s masterpiece and has taken it upon himself to ensure that his brother finishes the painting, whatever the costs.

How Did You Come up With Your Characters?
I read an article in The Sunday Times about artists and their muses and this inspired me.

Book Sample
The door opened almost as soon as she knocked on it. “Good morning,” Edward greeted her warmly, “and what a lovely morning it is,” he added, glancing up at the cloudless sky above the city.

“Indeed it is,” Carla sang. Now free from her pounding headache she felt invigorated. It felt so good just to feel ‘normal’ again that she could hardly believe it. Brushing the crumbs of a hastily bought and ravenously devoured sausage roll off the front of her light blue dress she entered the house.

“Master Saul is expecting you,” Edward informed her, pulling the door closed. “Please, go right up,” he instructed.

Carla swallowed, after spending so much time concentrating on feeling human all morning that she had hardly had time to think about anything else, but now that she was here and her hangover wasn’t, her anxiety kicked in. Her hands trembled on the balustrade and her legs shook as climbed the stairs.

The door to the studio was open and as soon as she stepped foot onto the landing, she saw him. Dorian was standing with his back to her, looking out of the window, a covered canvas behind him.

“Hi,” she said, entering the studio.

“Sorry, I did not mean to interrupt,” she apologised nervously.

“No, please there is no need to apologise, I just did not hear you come in that’s all,” he said, “and you did not disturb me, I was merely thinking, that’s all.”

“All the same, I did not mean to startle you,” she offered.

Dorian smiled warmly, “I’m so very glad that you decided to come back,” he admitted. “I was hoping you would,” he confided. He was dressed almost exactly the same as yesterday, barefoot, blue jeans, open shirt, but today his shirt was black and the colour looked so sexy on him that it took her breath away.

Casting his eyes down towards the floor he rubbed his chin as he strolled over towards her. He looked so vulnerable and yet so strong, Carla was transfixed. “It’s an intimate thing to be an artist’s model,” he explained. “So much more than any other kind of modelling I think, an artist has to get to know his muse better than anyone else knows her, otherwise he cannot paint her,” he explained, raising his eyes to meet hers.

“And do you feel you know me that way?” she asked.

He lifted his hand from his jaw, “Not yet, but I get the feeling I soon will, at least I hope to,” he said. “Shall we get started?” he grinned.
“Yes.”
As soon as she saw the smile on his face, Carla felt unbelievably and childishly happy. Haunted by her own insecurity since leaving yesterday, she felt the ghost of self-doubt vanish into the air around her. She mentally pinched herself, she could hardly believe that this was true, but it was – Dorian was as gorgeous as she remembered and there was something about her that he seemed to really like.

“Good. There is a robe behind the screen for you,” he informed her as he strolled over to the sofa.

With her shoes clack, clacking on the wooden floor, Carla tottered over to the screen. Undressing more quickly than yesterday she noticed that she was shaking and smiled, knowing that this time, her body was not quivering with nervous terror – it was fluttering with anticipation.

The robe was cool and soft and felt familiar against her warm flesh. She had thought so much about yesterday that even the surroundings had come to feel like home and Carla had never felt that she belonged anywhere more than she did here with him. Confidently she stepped out from behind the screen and spied him now seated on the chaise lounge looking directly at her. Carla halted, there was something different in his expression and she was suddenly unsure of what he wanted from her.

Carla was confused, “What?” she asked, terrified that she had done something wrong.

“You look perfect today.” Dorian rose from the couch. “Take your robe off now please,” he instructed.

Carla could feel his eyes on her and slowly and seductively she untied the robe and let it slip down her arms to the floor. Flicking her head back she tossed her unruly curls down her naked shoulders and smiled to herself when she heard him gasp.

“Good,” Dorian remarked as he walked towards her. “You’re absolutely perfect.”

Her heart started to thump in her chest and her stomach flipped as he approached.

“Can I touch you again?” he asked, stopping directly in front of her.

“Yes,” she uttered. It was all Carla wanted at that moment.

A sigh caught in the back of her throat as Dorian lifted his right hand and ran his fingers under her hair and across the delicate skin at the back of her neck. His caress was so light, it was hardly there, yet her body longing for him, felt every movement. Tracing the contour of her face, his fingers glided along her jaw line. The thumb of his right hand crossed her mouth, caressing her bottom lip he forced it open and entered it. He dragged his thumb from the inside of her mouth and down her face, smearing her chin with the wetness from her mouth. She moaned with pleasure, she did not want this to stop. Her clit twitched, shocking her, she had no idea that this turned her on, but it did. Seeming to read her body, Dorian repeated the action. Carla found his touch so erotic and intimate, she had never been explored in this way and it was a totally new sensation for her. Longing to make contact with him, she pushed her tongue forward and jabbed his thumb with its tip. Her body reacted immediately and she felt her buttocks burn with desire. His skin tasted of salt, wood and charcoal. From the briefest of morsels, she knew that she had sampled the essence of the artist, but now she wanted to feast on the man.

“Do you want me to continue?” Dorian asked. His voice was low and seductive and the tone was thick with desire.
Unable to trust either her own voice or her judgement Carla nodded weakly. She could hardly believe this was happening, but since Friday night she had thought about sex almost constantly and she realised just how emotionally isolated she had become. She had been alone for so long now that she was almost afraid that it was a part of her, and that she would never be able to commit to another person again. These last few days however, had changed her and she had come to understand that she was wrong. This unfamiliar feeling of being desired was so addictive and delicious that she constantly craved more. Suzie had made it clear that she found her attractive and now this gorgeous young man was standing in front of her telling her that she was perfect. Carla had never felt so bamboozled, but if this was a dream she never wanted to wake from it.

This year Tilly has made the decision to go it alone as an independent.

Tilly first became aware of the emotional and physical power of the written word as a child at the age of 12, she has never fully recovered from the pain of Ginger’s death in Black Beauty.

An avid reader, Tilly likes a variety of genres ranging from Homer to horror.

Tilly has a degree in the combined humanities of Literature, History and Sociology and runs a boutique market-ing agency when she is not writing.

Tilly writes erotica for people over the age of 18 only.