You are here: Home / *Reading Room / Featured Books / Features / The Test of Gold by Renee Yancy 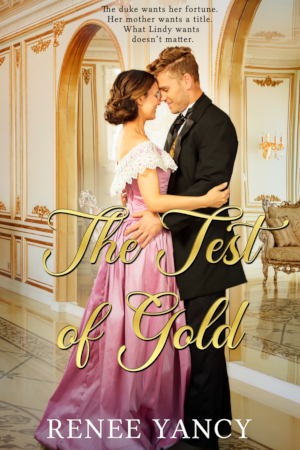 Evangeline “Lindy” Lindenmayer has been groomed since childhood to marry into the British aristocracy, as her mother’s ultimate ambition is a royal title for the family name. But literature fascinates Lindy far more than ball gowns, and she spends all her free time in the library, the only room in the Fifth Avenue mansion where she can safely indulge her passion for reading and find refuge from the prying eyes of her mother.

Jack Winthrop is studying for the ministry at Union Theological Seminary and has been invited to use the Lindenmayer’s library for his studies. His sole experience of upper-class young women has occurred at his uncle’s church, where he has found these young debutantes universally featherbrained. When he meets Lindy, he is pleasantly surprised to discover she has wide-ranging interests and is highly intelligent. Although cautioned by his uncle to stay away from her, he finds Lindy a kindred spirit and over animated discussions of books and life, they fall in love.

But to reach happily ever after, Lindy will need to challenge her mother’s long-laid plans, and weathering the approaching storm will take more backbone than she even knew she had.

What Inspired You to Write Your Book?
The true story of Consuelo Vanderbilt inspired my new historical romance, The Test of Gold. Consuelo was a "Dollar Princess," the nickname coined for heiresses in the late 20th century who possessed multi-million dollar dowries and married cash-poor British and French aristocrats.

The Gilded Age occurred after the American Civil War, from 1870 to the early 1900s, a turbulent time of rapid economic growth in America. Captains of industry such as Henry Ford, Andrew Carnegie, Cornelius Vanderbilt, and John D. Rockefeller amassed huge fortunes, but were considered nouveau riche by the patrician bluebloods of New York City. The exclusive list of people who could comfortably fit into the ballroom of the queen of high society, Caroline Astor, was called the famous “400.”

Social climber Alva Vanderbilt craved entrance into the 400, and schemed exactly how to achieve it. First, she built an extravagant “chateau” with one hundred and fifty rooms at 660 Fifth Avenue. Nothing like this had ever been seen before. Then she planned a huge costume ball, the cost of which by today’s standard was $6,000,000!

During the Gilded Age, European aristocrats flooded New York City to find a wealthy bride whose dowries could shore up their crumbling ancestral estates, trading titles for dowries. Have cash, will marry! Consuelo's mother, our infamous Alva Vanderbilt, forced her daughter at the tender age of eighteen to marry the Duke of Marlborough to obtain a royal title for the Vanderbilt name.

It was a loveless marriage, and in time, Consuelo escaped it and achieved personal happiness with Jacques Balsan, a French aviator and industrialist.

For my research, I explored some amazing estates of the rich and famous, read books about the etiquette of that time, and studied the fabulous gowns of Charles Worth, who was the premier Paris designer of the Gilded Age. I searched out the jewelry designs of Tiffany, Cartier, and Marcus & Co. Such fun and so beautiful to look at!

Doing the research took me into an era of incredible wealth and shocking poverty the likes of which will never be seen again.

My character, Lindy, has a happier ending!

How Did You Come up With Your Characters?
My main characters were based on Consuelo Vanderbilt and her mother and father. The character of Jack is an amalgam of several serious, studious men I know.

Evangeline Lindenmayer slipped through the marble halls toward her favorite room at 660 Fifth Avenue. Somehow the library had escaped the lavish attention to detail Mama and her architect had opulently bestowed on the other 149 rooms in the chateau.

The massive oak doors opened on well-oiled hinges, and the papery scent of books and leather enveloped Lindy. Sunlight streamed through the leaded glass windows and sparked off the gold lettering on the book spines. Her shoulders relaxed, and she gave a contented sigh. Such riches! In a lifetime, she could never read all the books here.

Her copy of Robinson Crusoe lay in the overstuffed chair where she’d left it the previous afternoon. Her mother had summoned her just as Robinson had been enslaved by a Moorish pirate. And one didn’t disobey Vera Lindenmayer. Lindy had waited all day to discover his fate. Curling in the chair, she lost herself in seventeenth-century Africa.

Sometime later, she closed the book and sighed.
“Is all well?” A tousled blond head peeked over the back of a leather Chesterfield sofa, and then a young man sat up and rubbed his eyes.

“Oh!” Lindy dropped the book and sprang to her feet, her hand at her throat. “Who might you be? What are you doing here?”

The man stood hastily and clutched a book against his black frockcoat. “I’m so sorry. I didn’t mean to startle you. I must have fallen asleep.”

“You did startle me, sir. And an unwelcome shock it was too!”

He reddened and took a step back. “Please forgive me. My name is Jack Winthrop.” He glanced at the bookshelves. “Mr. Lindenmayer has kindly offered me the use of his excellent library while I’m studying for the ministry at Union Theological Seminary.” He gulped and ran a finger around his collar.

“Oh.” That sounds like Papa, with his tender heart.

Lindy’s mouth fell open. Not one but two colleges. Does the fellow even know how fortunate he was? Oh, to have been born a man. It isn’t fair.

“Please accept my heartfelt apologies for startling you, Miss…”

“Winthrop, you said? Are you related to Reverend Joseph Winthrop at St. Thomas?”

The young man nodded. “He is my uncle.”

Lindy examined him a moment. The edges of his sleeves were shabby and his blond hair a trifle too long, falling over his collar, but something undeniably attractive about him telegraphed itself to her. “I recognize you now. You usually sit at the back of the church.”

Mr. Winthrop nodded. “That’s right.” He retrieved his hat off the sofa. “I’ll be going now. Sorry to intrude.”

Lindy laughed. He looks like a dog caught with the Sunday roast in his paws. “Don’t leave, Mr. Winthrop, you won’t be disturbing anyone. The only books Papa reads concern the care and breeding of horses, and my mother never comes in here. I’m the only one who frequents it with regularity. But aren’t you going to be frightfully busy with classes at two different colleges?”

His face brightened. “I thrive on it, actually. It’s a great privilege to attend both the university and the seminary. My uncle has generously made it possible.”

“Do you have other family besides your uncle?”

“I don’t believe I’ve seen her with you.”

A shadow darkened his face. “She isn’t well. Not strong enough to attend the service on Sunday morning.”

“I’m sorry to hear that. And your father?”

Mr. Winthrop smiled faintly. “My father died when I was seven, and Uncle Winthrop took us in. My father was his younger brother.” He crossed the distance between them and plucked her book off the floor. “Allow me.” He glanced at the title before he handed it to her. “What did you think of Mr. Crusoe’s adventures?”

My, he’s tall. Lindy sank onto her chair as a qualm went through her middle. Mama would have a conniption if she knew a man like Jack Winthrop was given permission to use the library. Having a conversation with a man Lindy hadn’t been officially introduced to wasn’t done in society circles. But he’s not exactly in my social class, and he did introduce himself. Quite nicely at that. And I’m seldom able to discuss books with anyone. She pushed the thought of her mother firmly out of her head. “Won’t you sit down, Mr. Winthrop?”