You are here: Home / Bargains and Freebies / Bargain Books Under $3 / The Tesseract Codex: Mission One by Bill Parker 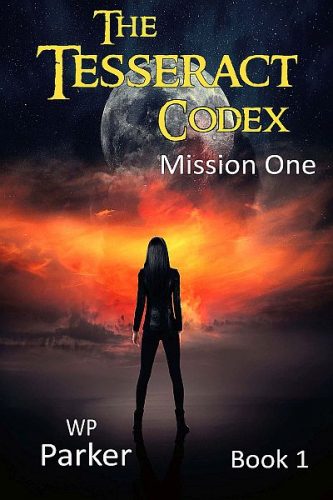 And then there was the Tesseract. It was a ship built with alien technology, but the mystery only began there. John should have known that when something looks too good to be true that it generally is, but he bought the Tesseract anyway. When he set foot upon its decks, he changed everything.

Politicians had declared the war was over, but that was not at all true as John and the crew of the Tesseract were about to find out the hard way.

Mission one takes John Korbin and the crew of the Tesseract into the heart of darkness to rescue Emma from the Mercenaries, but they would have to rescue Sophie first, if they were to succeed.

Then Mission One brought John Korbin and the crew of the Tesseract face to face with old enemies from the war that wasn’t really over. So, the Tesseract would have to survive in a crossfire hurricane that threatened John Korbin’s new homeworld.
If you enjoy a strongly character driven story with lots of action, then you have to read The Tesseract Codex. This is real page turning scifi that won’t quit on your mind right down to the very last word.

What Inspired You to Write Your Book?
A lot of vets returned home from the war feeling lost and alone, like John Korbin. This story in the far future is dedicated to all of them. It is a personal victory.

How Did You Come up With Your Characters?
Each character fit a specific need to drive the plot ever forward. This is a fast-paced book. It needed a bunch of misfits just like John Korbin to bring this all together. Mariah was the toughest character to get right.

Links to Purchase eBooks – Click links for book samples and reviews
Buy The Tesseract Codex: Mission One On Amazon