You are here: Home / Fiction / Fantasy / The Stolen Guardian by R. A. Meenan 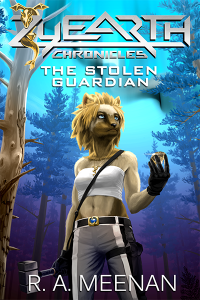 On the southern tip of the Yelar Peninsula, towering over the beach cliffs of the Desi Sea, lies the Defender Academy, the highly advanced military complex of the country of Zedric.

Near the top of the ranks is Izzy Gildspine, Golden Guardian of the Zyearth Defenders. Izzy’s not sure she deserves her title. Her healing powers are strong, though they’re nothing compared to the elemental powers of her partner, Matt Azure. But she can’t let her doubts get in the way of her job. The Defenders hold up the Golden Guardians as legends and she has to make sure she lives up to that expectation.

However, Izzy’s fears come true after a routine flight spirals into an out-of-control crash on a contaminated island campground, crawling with invincible monsters. To make matters worse, she and Matt find a friend and fellow Defender in the woods, half mad after being hounded for days by a foreign invader controlling the strange creatures.

The horror becomes personal when Matt is enslaved by their foe, forcing Izzy to make a terrible choice. Should she follow her heart and save him, or perform her Golden Guardian duty and kill him? The fate of all Zyearth hangs in the balance and she must decide soon before the choice is made for her.

What Inspired You to Write Your Book?
This particularly book was originally a role play between me and a friend of mine. The characters were originally sent up in a fan world on Earth, but my friend insisted we do our role play on the planet my characters came from, Zyearth, and everything exploded from there. Ironically, my role play partner did the book cover for this book.

As time went on, the world surrounding this book blew up and the stories became so big that they no longer fit into the fan world they were originally created from. So I decided to start writing the books in its own world for original publication. This book is the first of many that I want to throw out into the world.

I originally started writing these books as a way to escape the problems I faced in the real world. I hope my book can do the same thing for others.

How Did You Come up With Your Characters?
Tons of factors led to my character creation. As I mentioned, these were originally in a fan world, and they started off as such. As time went on, they developed into their current forms.

Their developments are all very different for each character, but I explore a lot of those individual changes and development on my personal blog.

Book Sample
Ouranos crept through the dense green forest, following an overgrown path leading toward the sea. He scratched the black fur under the short quills that topped his head and bent a catlike ear back with a frown, his bare, clawed feet padding noiselessly on the dirt. His simple red clothes, while appropriate for his royal status, made him feel too conspicuous against the green of the trees. He chanced a glance behind him.

His father, head royal of the Athánatos tribe under the title of Vasilefs, followed closely behind. His harsh silver eyes, midnight black fur, and minimalist clothing helped him to blend like an unwanted shadow. Even in the still woods, Ouranos felt his oppression hammering against his skull.

The Vasilefs glared at him and twitched his snout. He waved a hand at him. “Eyes forward, Pringkips,” he spat, doing Ouranos the disrespect of his royal title over his name. Ouranos fought his father’s commands, but his body gave into the Vasilefs’ physical control and he had no choice but to obey. They continued on through the woods.

Several minutes later, they arrived at their destination. The Vasilefs moved forward and pressed through the greenery, then pointed. “There.”

Hidden behind millennia of forest growth sat the spacecraft.

A relic of the colonization of the planet from generations ago, the spacecraft resembled one of the sleek, aerodynamic war planes that had so often flown over their island during the mainlander’s war several years prior, though this vehicle was far larger. It stood tall, barely shadowed by the forest surrounding it, its monstrous black wings, pointed nose, and slim body design feeling more than a little intimidating. Thick, reinforced glass windows in the front of the plane had been polished clean of dirt and pine needles recently, and the door into the machine stood wide open before him.

Though he had visited the plane several times while he helped his father make it worthy for flight, Ouranos still had little knowledge and great distrust of it. It was so alien to the secluded island he called home. Even the mainlanders would find this spacecraft unnerving.

No, this plane was something more. This plane came from Zyearth.

“This plane has been in our care for centuries,” the Vasilefs said.

“It is our charge to care for it, should we need to escape back to Zyearth.”

The Vasilefs eyed him. “Now it is needed.”

The Vasilefs glared. “You will call me by my title, Pringkips.”

Ouranos winced. “Vasilefs. Yes.” But somewhere in the back of Ouranos’ mind, out of reach of the Vasilefs’ control, anger and frustration burned. The Vasilefs’ definition of “need” was a disgrace. He did not need it for his people. He only needed it for his revenge.

But he could not turn his back now. Even if he wanted to, his father would not let him. Just standing next to him, he hung over Ouranos’ head like the cruel summer sun.

“Arrangements have been made, Pringkips,” the Vasilefs said. “You will arrive in one year. The Intelligence was insistent.”

The Pringkips nodded. When they had first entered the plane, they had met a strange, invisible voice in the machinery. The voice had no name, so they had christened it the Intelligence. It had been so excited to see them and it eagerly asked how it could be of service. When the Vasilefs explained his need, the Intelligence had spent days calculating the trip to Zyearth.

Ouranos had not been happy with the results. The idea of spending a year confined in the strange metal box had taken quite some time to get used to.

Ouranos fiddled with a small, metal pendant in his pocket. Jet black with a gold outline, the stolen prize held the shape of a legless, horned dragon, wings outstretched, clutching a diamond in its coils. The pendant was key.

It had seemed insignificant at first, after Ouranos pilfered it from its owner during a visit to the mainland, but everything changed when he had touched it. It lit up and projected images and information from the spacecraft’s home planet and had even displayed a native of that world. The profile showed a short haired quilar, white fur, blue tipped quills, green eyes. And under his picture, his title. Guardian of the Defenders.

This Guardian was their prey.

The strange pendant was proof. Zyearth was real. People still lived on it. And the Guardian that the Vasilefs sought so ferociously lived there.

The Vasilefs stood by Ouranos’ side. “You know your objectives.”

Ouranos nodded. Arrive on Zyearth. Find the Guardian. Force his cooperation. Complete the Cast. His mouth twitched at that final directive.

“You will not deviate.”

“And you will not entertain these thoughts of freedom,” he added. “Do not make the mistake of thinking that you can hide anything from me. Is that clear?”

Ouranos pressed his eyes shut a moment, but at the Vasilefs’ command of will, he opened them again. “Yes, Vasilefs.”

“You know, in your state, that you need no food,” the Vasilefs continued. “So no food will be packed. Do not try to hide an ally on board, or they will die.”

“And remember,” the Vasilefs oppressive force beat on Ouranos’ mind. His essence, feeling, mind, and soul seemed to burn through the Pringkips’ very skin, like a hand being shoved into a glove that was not quite large enough. He felt his father take control over his body, from his toes to his lips, until the Vasilefs got his final words in. Exercising his will, he forced Ouranos to speak the end of his sentence. He could not even cringe as his own lips formed the Vasilefs’ speech.

“I am always with you.” And just like that, it was gone again, the tyrannical essence leaving Ouranos’ body like air escaping a balloon.

Interview with Author – R. A. Meenan