You are here: Home / Children and Young Adult Books / The Stink by CC Hogan 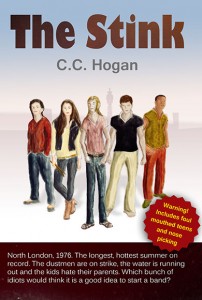 North London, 1976. The longest, hottest summer on record. There are strikes, the water is running out and the kids hate their parents. Which bunch of idiots would think it is a good idea to start a band?

Stench, Aroma, Smell, Haze and Fart might not have the sweetest nicknames in town, but these five have just finished their O-Levels and are on a mission to take their fledgling little band and get themselves a half decent gig.  Songs are good, playing is getting better, Smell’s voice is wicked, so what could possibly go wrong?

Everything! And not a mobile phone in sight.

First they need somewhere to rehearse, then they need to avoid a bunch of tramps who get angry over their choice of location, then they need to write some songs, earn some money, stay out of trouble, have a lot of fun and, of course, work out the difference between falling in love and going mad!

Oh, and a little problem of an old double murder…

But this is London in the seventies.  The National Front were doing their racist bit, homophobia was seen as acceptable TV comedy and generation gaps were rather impressive.  The Stink might be a comedy at heart, but there are tears too and all five learn some pretty harsh life lessons.

So, if you were a teen back then, this is one great nostalgia trip – if you are a teen now, then this is your chance to find out what all the fuss was about.

What Inspired You to Write Your Book?
This is trip down memory lane for me. Although it is not autobiographical and none of the characters are me, I was as singer in a band when I was a teen back in the mid seventies and the long hot summer of ’76 was when it all happened.

As much as I love the modern world of communications and the internet, when I think back to that time, we had a freedom then that is gone now. When we stepped out of parent’s front door, they didn’t have the foggiest idea of where we were and without mobiles, no way to chase us down. We played, we cried, we feared and we fell in love away from our bedrooms and the cocoon of family life, and it was amazing.

That is what I wanted to write about.

How Did You Come up With Your Characters?
Most of the main characters are invented or are a combination of people I knew back in school. But though they may be fiction, their life and loves are real and so is the pain. I had several black friends, a few jewish friends and my best friend was gay. I hated the rubbish they had to put up with back then and I have put it in the book quite intentionally.

There is one real character in there, however. The girl who is the drummer for the band is my first girlfriend from nose to toes, and though I haven’t seen her for thirty five years, I loved her more than anyone else, even though she kept beating me up!

Book Sample
If you don’t wake up in the morning with your finger stuffed up your nose wondering where it had spent the rest of the night, well, you ain’t Smell. To Smell, small things like where his finger had spent the night could spoil his day as easily as someone dropping a piano on his brother’s Ford Escort. Actually, strike that; Smell would pay at least a fiver to watch his brother’s precious rust bucket flattened by a major chord, and let’s face it, he hadn’t seen a fiver since the last time he had poked around in his mother’s purse and his head was still hurting from that trip.

Waking up in the morning was an effort on most days for Smell and it seemed the more important the day, the more fun that was going to be had, the harder he found it to wake up. It was like some dreadful self-fulfilling prophecy where the greater the chance was that he was going to have something good happen to him, the less likely he was going to be awake for it. Smell worried that on the day he found out he had actually successfully chatted up a beautiful bird, he would never be able to wake up again.

“Melvin, I need your washing and you need to be up!” Smell cringed as the voice of his mum echoed through the floorboards. Her words, despite being muffled by the walls as if she had shoved a sock in her mouth, hit his ears at a volume that would give a low flying jumbo jet a run for its money. On cue, a Jumbo passed overhead at an almost apologetic volume. Melvin Arnold Lane. Smell wondered if being given an unspeakable name would count as mitigating circumstances as he thrust one slightly grey foot from under the blankets and, with a gentle pop, removed his finger from his nose; that was one habit he was going to have to get rid of before he got himself a girlfriend!

“What washing?” Smell tried to focus on the remaining patches of floor in his ten foot by twelve bedroom as he swayed into a standing position.

“That would be anything at carpet level that doesn’t look like the carpet,” his mother explained as she burst in through his door like Jack Regan. Jane Lane, who wished she had married a man with a different surname, was nearly a foot shorter and two feet wider than her son. Despite this, Smell was pretty sure she could pick him up and chuck him into next century, assuming the world wasn’t going to end in 1984, of course. “And in case you are thinking that there is probably something left in your cupboard that you can wear; there isn’t. Unless you count the pyjamas with teddy bears on that you got for your tenth birthday; top of your wish list as I remember.”
“But what am I going to wear?”
“I suggest you steal one of your brother’s t-shirts again and you can wear the jeans you have been wearing for the last week; they appear to be more vertical than you are.” Smell became aware that he was lying down again, though he had no idea when that had happened.
“I will get your dad to cut your jeans off you later with his blow torch.” And with that, Smell’s mother jumped out of the window and abseiled down the outside of the house clutching most of his wardrobe. Or, at least in his half-awake imagination she did. He suspected that she had probably used the door as normal. Smell, cautiously glanced at the expanse of bright, lime green carpet that had been uncovered and wondered if they realized why he spent so much time burying it with clothes.
It took Smell three attempts to get into his jeans; his mother had been right, they were definitely stiffer than they had been last week. He never had trouble getting the first leg in, but it was trying to pick up the second high enough that caused him the problems. Eventually he managed to wedge himself between the cupboard and the wall and only gave himself the smallest smack in the face with his knee. Out on the landing there was an extended moment of hesitation where he debated between the bathroom, the bog and his brother’s bedroom. His biology eventually stepped in and decided for him, leaving his brother’s bedroom and the bathroom at two and three on his to-do list.
Smell’s brother had been out since early morning. He had finished his A-Levels and had got himself a job as a milky while he worked out what to do next. Richard “Dick-head” Lane was an organized sort of bloke as long as everything revolved around his precious car. He had passed his test back in January, but he had owned the car for over a year, spending everything he had on taking it from complete rust bucket to sublimely sleek and polished rust bucket with go-faster black and chrome around the rusty red body. To be fair, it was an Escort Mexico, so was pretty quick, or would have been if it were not so knackered. Either way, he was out on his rounds and would not be back till nearly mid-day, so Smell had the luxury of choosing just the right shirt.
“Hurry up, Melvin! Its lunch time and your bother will be back in a minute!”
“Oh, f….”

Buy The Stink On Amazon