You are here: Home / Fiction / Mystery/Suspense / The Spider Thief by Laurence MacNaughton 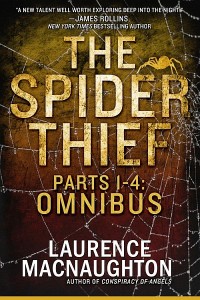 All of his life, Ash has been haunted by the ancient curse that killed his parents.

From the cobweb-choked ruins of a lost city in the Amazon emerges a gold spider statue with flashing emerald eyes. If the legends are true, the gold spider has the power to erase the past . . . change the future . . . perhaps even grant eternal life. But touching the spider will steal your memories — and then your life.

For centuries, men have killed to possess the gold spider. Like the man who murdered Ash’s parents. Now, the killer has returned, and Ash is trapped in the grip of the spider’s curse.

His only hope is Cleo, his embittered high-school sweetheart, now a highly-trained agent obsessed with tracking down the spider. But Cleo knows something she’s not telling Ash — about a million dollars in dirty cash, and the terrifying secret his parents died to keep.

Can they solve the riddle of the gold spider before its deadly curse claims them next?

What Inspired You to Write Your Book?
Like a lot of authors, I have notebooks and file folders stuffed with bizarre but cool real-life facts just itching to get used in a story. For example:

While I was writing The Spider Thief, a local man disappeared for two weeks before he turned up with nothing but amnesia and a loaded gun — just like the main character in my book. Weird.

Even weirder: we had a tarantula migration here in Colorado. I wish I was making that up. I’m not.

The backstory of The Spider Thief hinges on a lost city discovered in the Amazon rain forest. That’s a real thing, too.

Throughout the writing process, my tireless agent, Kristin Nelson, kept giving me a steady stream of good advice about how to tie the story together. She kept telling me that everything had to do with the mysterious gold spider, which was entirely true.

I woke up in the middle of the night with the title The Spider Thief in my head. After that, everything clicked into place.

How Did You Come up With Your Characters?
All of the characters in The Spider Thief are inspired by people I bumped into in real life. On the street, on the subway, in jury duty, biking through the city, you name it.

One time at Costco, a well-dressed, bone-thin black guy pointed at the fedora I was wearing and said, “Dig that lid, man.” He became Prez.

Another time, I was talking about filmmaking with a young Colombian guy who wore glasses with transparent blue frames, and he told me he hadn’t seen his brother since he was arrested. That guy became Mauricio.

The book started out just as Cold Million, and had more to do with a million dollars in counterfeit cash (inspired by a true story, by the way). That ended up being just one part of a much bigger and more exciting story.

Other episodes expanded the story:

Stolen Memory is all about the main character, Ash, who is a con artist whose memory is stolen by an ancient curse.

Haunted Dreams is about Ash trying to help his high school sweetheart, Cleo, find the man who murdered her father.

Cold Million is the third part of the story, with the counterfeit cash. Ash is a fugitive from the FBI, wanted for a murder he didn’t commit.

Ghost City is the final episode, and it wraps everything up with a twist so shocking it even startled my literary agent. And that’s saying something.

Book Sample
When an outlaw unearths an ancient gold spider statue and falls prey to its memory-stealing curse, his only shot at survival lies with the woman he left behind years ago — a highly-trained agent harboring a deadly secret. A gripping serial thriller from “a new talent well worth exploring deep into the night.” (NYT bestselling author James Rollins). Get the first novella FREE at www.LaurenceMacNaughton.com.

“The gold spider.” Andres held the long pistol steady. “Her power will belong to me.”

The crisp mountain air washed over Ash like a torrent of cold water. It whispered across waves of tan grass, carrying the scent of old pines, making him feel alive again.

The porch boards creaked as the gunmen crowded in on either side of Ash. Behind, Andres’s leather shoes stepped onto the wooden threshold. Then everything went quiet.

Ash’s mouth went dry. He had no idea.

But this was it. No room left to stall. Now he had to improvise.

He tapped his boot-heel on the hollow floorboard and looked down, drawing their attention to his feet. Then he tensed and launched himself at the corner of the porch. He hit the rotted corner post with his full weight.
The post broke against his shoulder, black decayed wood exploding from its center. Ash let his momentum carry him off the porch. The roof collapsed behind him, deafening.

Down into the knee-high mountain grass. He stumbled and fought for his balance. The driveway’s loose sand slipped beneath his smooth soles as he sprinted for the shed.

He risked a glance back over his shoulder. The porch roof was an avalanche of shingles and rotted wood. It folded in on itself, tearing off siding from the second story. A wall of dust rushed outward, blotting out the front of the house.

Ash pumped his arms as he ran, breath burning in his chest, and skidded into the shed. The sudden transition from sunlight to darkness left him blind for a moment. Moolah barked and plowed into him, the dog all happy paws and wet nose.

“Come on, buddy, let’s go.” Ash blinked, trying to get his eyes to adjust, looking for a weapon to grab. Stripes of sunlight fell where the afternoon sun shone through the wall. Nearby, a cobwebbed pitchfork hung from rusted nails. He reached for it.

About the Author:
My books are about deeply flawed characters who risk it all to do the right thing — and in the process, rise from obscurity to become heroes.

Everything I write is a mash-up of mystery, thriller, science fiction, and fantasy, in varying proportions. You’ll always find strong female characters, cool cars, fast action, and a world even weirder than ours.

I grew up on a (probably unhealthy) diet of old pulp paperbacks and New Wave science fiction and fantasy from the Sixties. As a kid, even though I was surrounded by computers, I pounded my stories out on a Remington manual typewriter. Still do, sometimes.

My biggest influences are Robert B. Parker, H.P. Lovecraft, and William Gibson, who signed my Tattered Cover hat, which I hang over my desk for inspiration.

Bestselling author James Rollins calls my work “thrilling.” J.A. Konrath says it’s “uber-cool.” But don’t take their word for it — read one of my stories, and share your thoughts about it.