You are here: Home / Fiction / Romance / The Soldier by Renee Rose 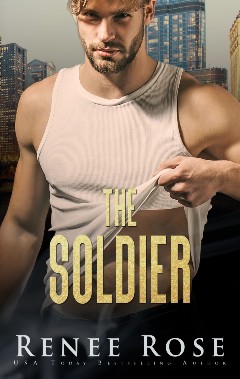 I SHOULD GIVE HER UP—SET HER FREE.
The Russian army made me a killer, but the brotherhood made me what I am.
Ruthless. Deadly. Irredeemable.
Which is why Kayla should stay away.
The innocent, young actress has a bright future ahead of her,
so long as someone doesn’t break her first. Someone like me.
Every weekend, she gives herself to me fully. Without question. Without hesitation.
She’s mine to command.
In return, I give her what she craves—pain and pleasure.
But it’s a fantasy that can’t ever become reality.
We’re playing with fire,
but I can’t seem to let her go…

What Inspired You to Write Your Book?
I absolutely love a bratva bad boy. I first wrote Kayla and Pavel’s story as a short story for the Valentine’s Day anthology Black Light: Roulette Rematch. I gave them a happily ever after and was finished with them, or so I thought. But they kept talking to me. They wanted a full-length book, so here you have it. It’s a bit different from the others in the series since they were already in an established dom-sub relationship, and I wasn’t playing with my favorite dub-con elements. Their drama simmers under the surface and goes deeper.

How Did You Come up With Your Characters?
They both had appeared in previous books–

Book Sample
A bolt of excitement strikes like lightning the moment he walks through the glass doors. Power radiates from the man, contradicting his youth and street tattoos. His neatly trimmed beard adorns a square jaw and chin with a dimple in the center. He would be Hollywood handsome except for the distinct air of danger around him. More than one head turns to see who is coming in. It’s L.A., so there are famous people everywhere—especially at the Four Seasons, and Pavel looks like he’s one of them.

Like always, he’s wearing expensive clothes, but his crisp button-down shirt is open at the throat, revealing the tattoos that crawl up his chest to his neck. He is every inch the bratva badass. He carries a small suitcase, which I know from experience contains his implements of torture. Things he will use to master me over and over again, all weekend long.

I slide forward on the modern couch, ready to surge to my feet, but he gives a minuscule shake of his head, his gaze bouncing off me to the line at the front desk.

The explosion of butterflies in my belly makes it hard to think. To decipher. Other than lifting one finger for a half-second, as if to signal me to wait, he doesn’t acknowledge me. He walks past to stand in the line at the front desk. A hot flush floods my cheeks as I sit, my spine straight, tits out, awaiting his command.