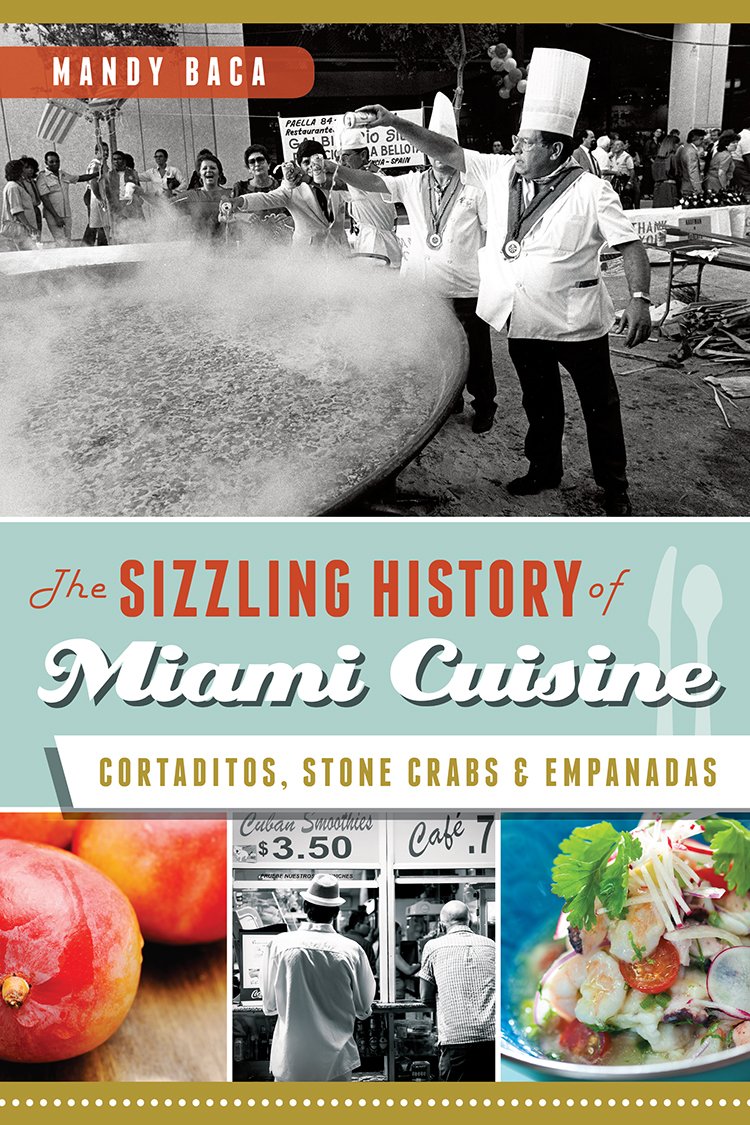 What inspired you to write your book?
As a food writer, I always knew I wanted t write a book-it just took me awhile to figure out what that was exactly. My family is from Nicaragua and I’ve spent most of my life explaining where Nicaragua is located on a map and its cuisine. I figured I would write a book about its food and history. Having grown up in Miami, I eventually got to thinking that Miami’s own food history had not been documented. The idea came about in 2009 and I haven’t looked back since. The book is the first of its kind- combining history and food; so it is not strictly a cookbook or a history book, but a combination of both, which is exciting.

About your Book:
The culinary history of Miami is a reflection of its culture–spicy, vibrant and diverse. And though delectable seafood has always been a staple in South Florida, influences from Latin and Caribbean nations brought zest to the city’s world-renowned cuisine. Even the orange, the state’s most popular fruit, migrated from another country. Join local food author Mandy Baca as she recounts the delicious history of Miami’s delicacies from the Tequesta Indians to the present-day local food revolution.

Sample Recipe or Food Advice
Excerpt:
INTRODUCTION
“But the bright side is that Miami’s optimism, coupled with its unique geography, has, over the course of its one-hundred-plus years, made it like nowhere else in America…or rather North America.” —Scott P. Cunningham
Miami is a world all its own, and as poignantly mentioned above, like no other place in the country. Ask anyone what he or she thinks of Miami, and the following is conjured up:
“Southern American (politically liberal, anti-big government) with strong Latino influence (and a lot of ultra-conservative Cuban ex-pats).”
“When I think of Miami, I think Latin American culture predominated by Cubans and mixed with a healthy elderly Jewish population.”
“Alligators, crazy people, sex, beach, Cubans and Europeans, tourists.”
Ask anyone what constitutes Miami’s cuisine, and you’ll hear the following:
“The only thing I can come up with is rice, fish and lots of fruits, like pineapple. Also, there’s a lot of beef consumption.”
“Miami cuisine equals Cuban plus other Latin American influences mixed with basic American.”
“Cuban with some Jewish items mixed in.”
A lot of the above is true, but other parts feed into the negative stereotype that is often associated with Miami. Incorporated on July 28, 1896, Miami is a city that was created from the dreams of our forefathers from the cold North, who were looking for new land, new vacations and, most importantly, new dreams. They were looking for a new Naples, one could say, and if at the very least, a new Jersey Shore, which at the time of Miami’s incorporation was considered America’s playground. In contrast to other cities that came to be out of necessity, Miami was created for the enjoyment of others. Why else would the early settlers willingly move to a fly-infested swamp that was, at the time, more isolated and dangerous than Perth, Australia? While Miami was incorporated in 1896, much later than the rest of the country, the area has a long and rich history of wars and diverse settlers, making it one of the earliest inhabited locations in what is considered the New World. Findings of pre-Columbian settlements in the area have been traced as far back as ten thousand years ago.
To dispel the preconceived stereotype, Miami is no longer just sun, sand and party. It is most recently an epicenter for fashion, arts and culture. Food- wise, Miami has flourished in the past thirty years, and world-renowned chefs and innovative cuisine have made it a permanent fixture on the world’s food map. It is now an important hub and a top contender when comparing the best food cities in America.
But how did we get here? And why do we eat the way we eat? There are hundreds of books about the history of Miami and hundreds of Miami and/or Florida cookbooks, but none that merge the two as a conclusive history of Miami’s cuisine.
A popular quote amongst food lovers is that of separating those who eat to live from those who live to eat. For those that eat to live, it’s easy to write off food as nothing more than sustenance and the occasional form of entertainment—a necessary part of society and human interaction. It’s also easy to forget that food is an evolutionary being that is not stagnant. Food history is important because it teaches us about a specific community and its evolution. In this case, Miami, a magic land for newcomers and the land of the transient, food is especially important, as it acts as a form of identity and helps with assimilation. It also provides an exceptional view of the progression of a city—its highs and lows—as well as its people.
A lot of history can read like a timeline, filled with dates and not very entertaining. In researching and reading history, the mundane always seems to take a backseat, and little details of the daily lives of common society were rarely recorded. In the present day, with the likes of Facebook, Twitter and Instagram, all of the intricacies and the banality of life are being recorded and will be forever stored in the realms of the Internet so that when the twentysomethings of this generation grow up, they can have a detailed view of what their life was like back in the 2000s. In the same fashion, I want this document to read like a story—the story of Miami through the lens of food and a compilation of the food stories throughout the centuries told by the people who lived them.

What formats are your books in
Both eBook and Print

How do you see writing a food/cookbook as different from writing other genres of books?
Food is at the center of life and a topic that important needs to be written and read about. Food is also a very flexible topic-it can be fiction or history or a poetry book, so there are no limits and that’s very cool and freeing for a writer.

Advice to someone that is thinking about or currently working on a food book or cookbook
– Don’t stop writing, even if it’s just on your blog.
– Speaking of which- if you don’t have a blog or a website, create one immediately. It’s easy to learn and free.
– Be active on social media- especially Twitter!
– Don’t be afraid to put yourself out there.

How did you decide how to publish your book and where is it published through:
I was very lucky. Because of a variety of reasons (blogging, Twitter, industry experience), I was contacted by a commissioning editor at The History Press out of South Carolina. They are publishers of history books (many food history books, too!) and it just made sense. It was my opportunity and I had to take it.

Author Bio:
As a food and history obsessed Miami native, Mandy Baca found her true passion for food and writing while enrolled in the Hospitality School at Johnson & Wales University. She also holds a Master’s Degree in Italian Gastronomy and Tourism from the University of Gastronomic Sciences in Colorno, Italy. In the past, she has held various positions within the restaurant industry and has contributed to various publications both locally and nationally. Mandy Baca currently resides in Miami and continues her quest to inspire and advance the interest in local food culture.