You are here: Home / Children and Young Adult Books / The Silver Princess by Lea Carter 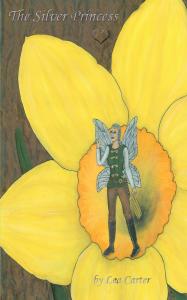 Have you ever wondered what would happen if fairies weren’t “stuck” in adolescence? If they didn’t spend all their time preparing to paint flowers and spread frost?
In this fairy adventure, wisdom wins out despite inexperience when young Princess Rebecca takes on civil unrest and a handsome stranger. Readers of all ages will cheer her courage as she defies those who would dethrone her father.
Silver Princess is the first in a series of books following the adventures of Princess Rebecca and later other characters that we meet along the way. Enjoy a little light fantasy that approaches fairies from an unusual perspective!

What Inspired You to Write Your Book?
This began as a writing exercise, an attempt at recording an actual event in my own life. In surprising twist, however, the horse that threw me became a dragonfly and the main character was completely reinvented as a fairy! I threw in a handsome stranger because that just seemed to follow and just couldn’t stop writing.

How Did You Come up With Your Characters?
The fairy princess Rebecca is named after my best friend from college and is a mix of everything wonderful I wish I was and a few of my own insecurities. The other characters are similar in their composition, noble, honest, caring, yet each with a personal weakness or two that complicates their lives.

Book Sample
“I have to start the dance,” I told him softly, the doubt in my mind somehow translating itself into a concerned tone without bothering to ask my brain for permission.
“We have to start the dance,” he corrected gently. “Perhaps you believe that I cannot dance?”
Fairly caught, I hesitated, unsure of what I should say. Part of me was sure that he could do anything, and part of me was furious with him for interfering in such an important event. Which part should I listen to?
“Can you?” I responded at last, dropping the matter back in his lap. “If you cannot,” I continued hastily, snatching it back out of his lap as one might retrieve a glass bauble from a child, “I am sure that the Senior would be only too glad to act as my partner.”
He cocked his head to the side for a moment, as though thinking about it, and then shook his head.
“No,” he said. “I started this, so I will finish it.” His mouth settled into a determined line that warned against argument.

About the Author:
Avid and eclectic reader Lea Carter spent most of her life trying to recreate the magic that she so often found between the two covers of a book. She mixed genres and dabbled with storylines until the few people that she dared to share her writing with grew tired of never finding out how the story ended. Oddly enough, it was an attempt at writing part of her own story, a true story, that allowed a fantastic bit of fiction to emerge.