You are here: Home / Fiction / Romance / The Showboat Affair by Gwyneth Greer 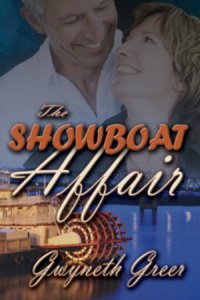 Jean Kingston, dumped by her unfaithful husband after 30 years of marriage, is determined to become an independent woman for the first time in her life. Her married daughter has other ideas, but Jean brushes off her long unused degree in interior design and strikes out on her own.

Attorney Nick Cameron has been a widower for 20 years, but an introduction to Jean makes him consider that his ‘snow on the roof’ isn’t an indication the fire’s out on his hearth. His son, also his law partner, strongly disagrees.

When Nick’s and Jean’s casual acquaintance ripens into love, they are shocked at the stark disapproval of their adult children. Yet they can’t believe Charlie and Julianna are behind the not-so-random threats and even physical attacks.

In an attempt to defuse the situation, they take a quick trip to Branson, Missouri, where Nick plans a romantic excursion on the local showboat. On their way back to Houston, their happiness is shattered by what police consider a deliberate act of road rage.

Jean suggests they let their relationship coast for a while, hoping whoever is behind the threats–and also their children–will reconsider. But one careless moment–one night of terror and death–convinces them they don’t want a “make-believe” affair.

What Inspired You to Write Your Book?
Leaving the Branson Belle after a dinner cruise during a trip to Branson MO, I said to a friend, “This would make a good setting for a book. I think I’ll write ‘The Showboat Murders'”. Horrified, she replied, “Oh, no! The Showboat Affair.” And so a book was born.

How Did You Come up With Your Characters?
The old adage, “Just because there’s snow on the roof doesn’t mean the fire’s gone out on the hearth” is apt. Not many contemporary stories feature “older” lovers. The idea of second-time-around appealed to me, so I wrote Jean–dumped after 30 years of marriage–and Nick, a long-time widower–who have so much more left to give.

Book Sample
Jean, still wearing her gown and robe, mixed the batter for waffles while Nick washed up in the guest bath and used one of her disposable razors and leg cream to shave. “I used my finger as a toothbrush,” he said, cozying up behind her to kiss her neck.

She shivered. “Not before breakfast.”

“And not after dinner either, apparently.” He laughed.

“You’re skating a thin line.” But she laughed, too.

He put up his hands in a gesture of surrender. “I need coffee.”

“It’s ready, and the waffle iron is hot, so you’ll have breakfast in a minute.”

The peal of the doorbell startled both of them. “This could look bad,” Nick said.

“Not if it’s Selina. Maybe it’s her. She went to look at some of those ice cream parlor tables I was telling you about last week.” Jean eyed him critically. “Button your shirt.”

“Button it anyway.” She brushed past him on her way to the door. “Maybe you should disappear.”

Jean sighed. “No.” At the front door, she peered through the viewer and let out her breath in dismay. Juliana stood there, her jaw set, looking primed for battle. Jean unlocked the door and opened it. “What brings you here so early, Juliana?”

“I had some errands over this way. Aren’t you going to ask me in?”

Jean stepped back. “Yes, of course. Come in. I have a guest.”

Juliana’s eyebrows met her hairline. “A guest? I am interfering with your sleeping arrangements then.”

Jean made a quick decision not to defend herself. “Come in the kitchen. I’m making waffles.”

Nick rose hastily as the women walked in.

“You must be Nick Cameron,” Juliana snapped.

“Juliana!” Jean felt the blood drain from her face. “How dare you!”

Nick’s eyes flashed, but his voice was courtroom courteous. “I spent the night on the sofa.”

His mouth twitched. “But if I’d spent it in your mother’s bed, it would have been her business, not yours.”