You are here: Home / Fiction / The Shoulders of Giants (A Jake Abraham Mystery) by Jim Cliff 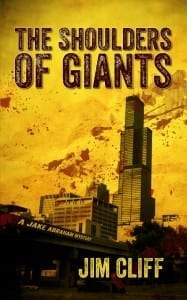 Jake Abraham is 28, and he’s just fulfilled an ambition. After three years of grunt work for a detective agency, he’s finally got his private investigator’s license, and set up on his own. Jake is a child of the eighties, brought up by Jim Rockford, Thomas Magnum, and three beautiful girls who worked for a man named Charlie, so he thinks he knows what to expect. His first case even seems like an easy one. All he has to do is find a missing girl.

Chicago Police Detective Scott Bales picked up the phone when a city broker was found dead in his car at eight in the morning. It means he’s in charge when, one by one, eight more bodies show up, all of whom died by the same hands. One of the bodies belongs to Susan Patterson, the daughter of a disgraced former Police Captain who just happens to be Jake’s client.

Inexperienced, determined and resourceful, Jake is convinced he has what it takes to bring the killer to justice.

Jim Cliff lives in Hertfordshire, England, with his beautiful wife, two brilliant children and an aardvark. Ok, so there isn’t actually an aardvark.