You are here: Home / Bargains and Freebies / Bargain Books Under $3 / The shadows of time by Joseph McCloskey 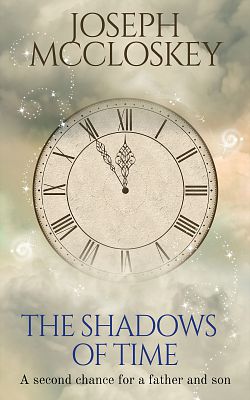 The story is based around three generations of a family as they strive to complete a project began decades before. The restoration of an old Jaguar car creates an opportunity for a father and son to bond, however fate has other plans and the opportunity is lost. Years later another generation takes up the baton but they too find obstacles. It is a warm-hearted story set in rural Ireland. The past the present, Irish history and the Great war play a role in the story.

What Inspired You to Write Your Book?
I have a love of history, old cars and travel. all these things play an active part in this book.

How Did You Come up With Your Characters?
The characters are based loosely around people I have met both locally and on my travels.

Book Sample
The train rolled gently through the countryside like a
meandering river, a thin black line snaking through a green
landscape. The clickety-clack of the train on the tracks had
lulled him into a pleasant slumber. The smell of turf fires
and freshly cut grass filtered into the carriage through the
open window. The old familiar smells filled his nostrils as
he closed his eyes and nodded off. It had been days, maybe
even weeks since he’d slept so peacefully.
The sharp toot of the train’s whistle woke him with a
start. He sprung from his seat, eyes wide open, staring and
filled with fear. An older man, probably in his early fifties,
sat across from him. He’d been watching George while he
slept. He was still wearing his great coat, the army issue that
was meant to protect them from the elements; it barely kept
out the rain but became like a lead blanket when wet. He
jumped up when George bolted upright. He laid a hand
firmly on his shoulder to steady the boy.
‘Easy son, you’re safe here.’ he said, in a hoarse voice.
An ugly raised scar ran from the corner of his mouth to
his ear, it twitched when he spoke. ‘I know what it’s like to
be afraid, son.’ he added. George tried not to look at him,
or the ugliness of his wound. He made to say something
but stopped himself, then turned his face to look at the
kaleidoscope of green fields that passed the window. They
sat back into their seats without another word.
The train rounded a long sweeping corner. George
knew where they were. He popped his head out of the open

window as the station came into view. He was not looking
forward to this. He craned his neck to see if there was a
welcoming committee on the platform, almost certain his
mother would have organised something; she was forever
on one committee or another. She would have revelled in
the task of preparing a grand welcome for her son.
He sighed, relief written across on his face. The
platform was bare. No fanfare, no marching band. While
relieved, he was inwardly disappointed, curious that no-one
had come to meet him.
The train came to an abrupt halt, the jolt shook the
passengers onto their feet. Hurriedly they tugged their bags
from overhead shelves, pushed and jostled each other as
they rushed to get their things and get off the train. George
however, was in no hurry to leave, he stepped out of their way
and let them all leave before he made to go. When the carriage
was empty, he stood and tugged at his bag to free it from the
overhead shelf. He lost his balance and fell backwards onto
the older man who had also waited behind. They helped each
other to their feet and exchanged a smile. George opened
his mouth to speak, he wanted to say something, to share
something with this stranger. He might be the last person
he would see in a while who understood how he felt, to say
something about his experiences, what he had seen and done,
but no words would come. They exchanged a knowing look
and stepped away from each other. George had one foot out
the carriage door when the older man took him by the arm.
‘In time, we will forget all about it,’ he said, he looked
hard at George as he spoke. It was more a question than a
statement. He waited for a reply, a reassurance from George
that this would happen. George shrugged his shoulders,
gave him a weak smile and turned away. He was not so sure
he could ever forget.