You are here: Home / Children and Young Adult Books / The Ritual of the Four by Carla Trueheart 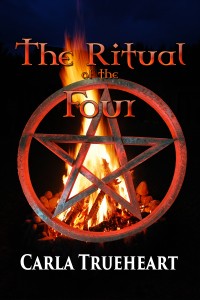 For sixteen-year-old Shaw Huntley, a normal day includes running from two men who want to kill him. Shaw has a dark ability: using only the power of his mind, and visualizing a specific gold and jeweled dagger, he can telekinetically cut or slice objects. If he gets angry enough, he can even cut people. Unfortunately, the two men chasing him murdered his father in search of the physical gold dagger currently in Shaw’s possession—and they will stop at nothing to track him down and obtain it.

When Shaw ends up in Rockpoint, New York, he meets Melody Tufts, a gamer who finds a mysterious triangular symbol on the hilt of Shaw’s dagger. After some investigation, Shaw learns his connection with the dagger and his dark ability were the results of a secret ritual—The Ritual of the Four—performed centuries ago by his ancestors. His dagger is number one in a group of four unique items, each one representative of the four magic elements: fire, water, air, and earth. He also learns there’s a way to reverse the Ritual of the Four forever so he can stop running, settle into a school, and perhaps even begin a romance with Melody. But after the two embark on a dangerous quest to reverse the ritual, decoding clues and unearthing maps, Shaw questions if he wants to toss away his ability—or finally face his foes.

What Inspired You to Write Your Book?
I was inspired by the Harry Potter spell “Sectumsempra.” Using this spell, Harry can slice and wound an enemy. I don’t think I was consciously writing this way, but looking at the finished product, it’s clear that the spell inspired the book. My main character, Shaw, can slice and cut people and objects using only his mind. It’s similar to telekinesis, only Shaw envisions a specific gold and jeweled dagger to cut his enemies. He hates his gift, so the plot grew from there.

How Did You Come up With Your Characters?
Shaw is a geekier version of Anakin Skywalker. He’s following a hero’s journey and he’s a little edgy, but deep down he’s also unsure and lacks confidence. He represses the things that make him mad and internalizes a lot, so his true ability is not known until the end of the book. If I’m lucky enough to write a sequel to The Ritual of the Four, Shaw will definitely battle some of these demons and take on a darker, edgier demeanor.

Melody was partially based on Hermione Granger. Again, probably an even geekier version of Hermione. She’s smart, witty, and a firecracker, but she also has a vulnerable side. She’s brave throughout the story and is the heart and soul of Shaw’s quest.