You are here: Home / Fiction / Romance / The Reunion by David Burnett 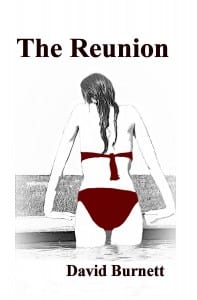 It is the fear of separation from everything she loves that brings Allison Bannister to the beach. She stops on the steps that lead down to the ocean. She is alone. The sun is setting behind her; the tide is rushing in, and dark water is licking at the bottom step. Off to the north, the lights of Charleston shine into the evening sky. To the south, a star twinkles as darkness descends on the barrier islands. Light and dark; good and evil. Reconciliation is not in the cards.

Allison shivers. How easy it would be to walk out into the ocean. Her winter clothes would take on water and weigh her down. When she went under, her body would turn cold, her lungs would fill with water, and all of her troubles would end.

It all started with an invitation to Michael’s high school reunion.

“Reunions are fun!” Allison tells her husband, Michael, when the invitation to his thirtieth reunion arrives in the mail. “You see old friends, talk about old times . . .”

“Talk to a bunch of fat, gray-haired people who I haven’t seen in thirty years . . . A blast.” Michael shakes his head, “Besides,” he adds, “strange things happen at reunions.”

In spite of his reluctance, Allison surprises him with tickets.

At the reunion, Michael does see his old friends. They do talk about old times. They watch a video, “Turn Back the Clock” – high school, 1979. As she meets his friends, listens to their stories, and watches the video, Allison discovers a Michael she does not know, a boy who was so very different from the “staid, serious attorney” to whom she is married.

Michael does have a blast. “Wouldn’t it be wonderful,” he asks later in the evening, “if you could crawl through a worm hole and find yourself in high school, again?”

Over the next few weeks, Allison attempts to cope with the strange things that happen as Michael “crawls though the worm hole,” and morphs back into the person he was thirty years earlier. She rolls her eyes when he plays practical jokes. She shakes her head when he trains to run a marathon. Where is the man I married?

Michael’s desire to return to his youth sets in motion events which disrupt their lives and tear the couple apart. Michael spends long hours in his new art studio, alone. Allison feels rejected and begins to build a life of her own, a life that does not require Michael. Before long, Michael and Allison, a couple who seldom spent time apart, rarely spend time together. They both feel neglected, and each blames the other. A long separation, the unexpected appearance of Michael’s college girlfriend, an unplanned rendezvous, and a charge of adultery threaten to end their marriage forever – and Allison finds herself alone on the beach.

The Reunion is a tale about how seemingly insignificant events can lead to a marriage on the brink, about the danger of staying silent when problems arise, and, above all, about the journey a couple in love takes as they attempt to obtain forgiveness, to avoid divorce, and to find themselves again.

How is Writing In Your Genre Different from Others?
In a Romance, the love story is central. All other parts of the plot revolve around this story and support it. Some readers confuse Romance and Erotica. A Romance may or may not have sex. The defining characteristic is not sex, but the focus on the love between two people.

What Advice Would You Give Aspiring Writers?
Have a happy ending. The ending does not have to be predictable. Bad things can happen, characters may be hurt, characters may even die. However, it is important that the main character, the one your readers have come to love, to identify with, and to root for, must be happy when the story ends.

I also think that it is important that the story does end. Sequels are fine, but each book should be a complete story unto itself. I feel betrayed, led on, when I reach the end and discover that I must read another book, perhaps one that has not yet been written, to find out what happens! Finish the story, even if you plan to tell more in a later work.

Author Bio:
David Burnett lives in Columbia South Carolina, with his wife and their blue-eyed cat, Bonnie. The Reunion, his first novel, is set in nearby Charleston.

David enjoys traveling, photography, baking bread, and the Carolina beaches.He has photographed subjects as varied as prehistoric ruins on the islands of Scotland, star trails, sea gulls, and a Native American powwow. David and his wife have traveled widely in the United States and the United Kingdom. During one trip to Scotland, they visited Crathes Castle, the ancestral home of the Burnett family near Aberdeen. In The Reunion, Michael’s journey through England and Scotland allows him to sketch many places they have visited.

David has graduate degrees in psychology and education and previously was Director of Research for the South Carolina Department of Education. He and his wife have two daughters.

His second novel, The Handfasting, will be published in summer, 2013.