You are here: Home / Fiction / Mystery/Suspense / The Reason for the Season by Judy Nichols 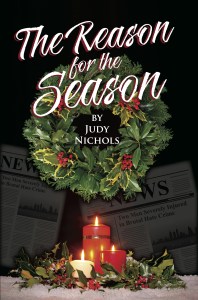 Mommy blogger Kate posts about the chaos of her life–dealing with her so-called “blended” family. There’s her second marriage, her surly 14 year old daughter from her first marriage, her ex-husband and his annoying wife, her hyperactive four year old son. And on top of that, she’s pregnant with twins.

She finds an oasis of calm in singing in a Christmas cantata at the local gay/lesbian church. That calm is shattered when, after rehearsal, she witnesses a brutal hate crime where two gay choir members are severely beaten.

Was it a random act of violence? Or were the men targeted? Kate is determined to find out.

What Inspired You to Write Your Book?
I have had the privilege of singing with the St. Jude’s MCC Christmas cantata and the idea for the book just popped into my head while we were singing the last song. The main character Kate first appeared in my mystery novel Tree Huggers and I could imagine her very pregnant and singing her heart out.

How Did You Come up With Your Characters?
I hate to say it, but most of the characters are based on people I know, especially the children. Molly is based on my daughter, Nathan was inspired by my niece’s son, who actually could jump in the air and spin around because he was so excited about turning four.

“As far as I’m concerned, there’s no excuse for your
kid to have a meltdown in a public place. Or in a
private one, for that matter. You’re bigger than he is.
You’re the boss. You can have a timeout anywhere. My
son has spent a great deal of his young life forced to do
nothing but look at the broccoli in the produce section at
Harris Teeter for minutes on end.

“Forget the people glaring at you. Forget that you
have to pick up your daughter at school in fifteen minutes.
This kind of behavior is unacceptable and you can’t let the
little bastard get away with it.”

In retrospect, Kate knew that going to the grocery store to grab a few things before picking up Molly from lacrosse practice was a bad idea. Nathan had skipped his nap, he’d had a bad day at preschool (three red marks on his behavior sheet) and she’d forgotten about the cookie samples at the store entrance.

Lately, it seemed like whenever she walked into the grocery store with Nathan, more than likely they’d be walking right back out again, with Nathan kicking and screaming.

As usual, the two of them sat in the back seat of her Jeep Patriot. Nathan flailed about in his car seat as Kate held him down, doing her best to avoid being kicked. His little sneakerclad feet could be lethal.

“I—WANT—A—COOKIE!” Nathan was crying so hard his words came out in gasps.

“We don’t give cookies to little boys who cry,” she said for the tenth time, trying to sound calm, but knowing that she was inches away from screaming at him the way he was screaming at her.

Her cellphone sounded a bird song, signaling a text. She let go of Nathan, who was starting to tire from all the effort he’d put into his rage over the injustice of no cookies. He continued to whimper, his face red and tear stained, but his hands and feet relaxed. She knew he would be asleep in minutes.

meant he’d be cranky at dinner, but Kate was willing to take a less than harmonious dinner in the future for a bit of peace and quiet in the present.

She rummaged through her purse for her phone. It was never where it was supposed to be.

Kate read the message and sighed, wondering what had happened to the sweet little girl Molly had been seven years ago. When it had been just the two of them, living in a cozy bungalow in the Sunset Park neighborhood of Wilmington, North Carolina instead of the bigger, newer house in Pine Valley.

She felt a fury of activity in her belly. Nathan’s hysterics had prompted Thing One and Thing Two to turn somersaults, reminding her that in less than three months time she would have two babies to care for, in addition to the surly teenager and the belligerent preschooler.

Please God, don’t let them both be boys, she thought, knowing that her unborn twins were either boys or girls or one of each and no amount of prayer would change that. But the thought of two more Nathans was terrifying.

This was not what she signed up for.

“Sorry,” she typed on her cellphone keyboard. “Nathan had a meltdown at Harris Teeter. Will be there as soon as I can.” She hit send.

In less than a minute, the little birds inside her phone were singing again.

Kate took a tissue out of her purse and wiped Nathan’s face and nose. He smiled at her, his temper tantrum disappearing like a storm in summer.

“Can we have a big cake for my birthday?” he asked.

“As big a cake as we can get,” she said, taking the opportunity to strap him into the seat.

“How long til I get four?” He held up four fingers, practicing his new age.

“Five days,” she said, holding up five fingers of her right hand. “One-two-three-four-five”

“And then it’s Trick or Treat, right?”

“Yes, two weeks after your birthday is Trick or Treat.”

“How many days until the babies get here?”

“No, you’ll still be four. And ninety days isn’t that long”

“Can we have Dora The Explorer at my party?” His eyelids drooped and he yawned.

“If she wants to come,” Kate said.

Nathan smiled at her and popped his thumb in his mouth. Sleep was on its way. She leaned over and kissed his forehead.

“Love you too, buddy,” she said. “You’re the best kid in the whole world.”

Even Thing One and Thing Two had settled down. She wondered if they would always take cues from their big brother. She hoped not.

Kate opened the door and maneuvered her bulk outside. Pregnancy was never easy. It seemed like it got more difficult with each child. She felt fat and bloated and tired all the time. Her back ached. So did her head and feet.

And it would only get worse once the babies arrived.

She waddled around the car to the driver’s side and managed to slide behind the wheel. She stretched the seat belt out as far as it would go. It barely made it to the locking mechanism. Kate wondered if they would need to get a longer belt installed the farther along she got.

Where do you go for that kind of thing?

She looked over her shoulder. Nathan was sound asleep. Relishing the quiet, she started the car and headed off to Hoggard High School to pick up Molly.

She hoped Molly’s day was better than hers.
.

About the Author:
udy Nichols grew up in a Batavia, Ohio a small town 20 miles east of Cincinnati and eventually found herself living in Aurora, Indiana, a small town 20 miles west of Cincinnati. She would be there still if GE Aircraft hadn’t made her husband Nigel an offer he couldn’t refuse– a chance to live near the ocean with GE footing the bill for moving expenses.
So now the family lives in Wilmington, North Carolina.

Judy holds a bachelor’s degree in journalism from Kent State University. She has been a newspaper reporter, a teacher, a temporary office worker, a customer service representative, and currently stay-at-home mom with way too much time on her hands. (And never mind that her daughter is a college sophomore).

She began writing her first novel Caviar Dreams one day while her infant daughter Aly was napping. Aly was halfway through kindergarten by the time it was finished. But Judy kept at it, and has written four more books TreeHuggers, Sportsman’s Bet (Ian Dodge Mystery #1), Trouble & Strife (Ian Dodge Mystery #2) and The Reason for the Season.

In April of 2012, Judy achieved her lifelong goal of appearing on the quiz show “Jeopardy!” She was a two day champion winning a total of $46,500 and the distinction of being officially named the smartest person in a room full of smart people.

Judy is available to speak at book clubs, libraries, whatever either in person if you’re near Wilmington, NC or via skpye. Contact her at judyfivecents@gmail.com.