You are here: Home / Fiction / Fantasy / The Ragnarök Chronicles by Nicki J Markus 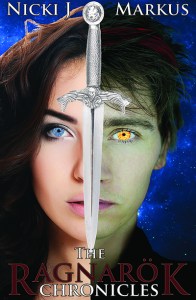 For Ragnarök will be completed….

Nothing marks Cassandra out—except her visions. She’d only ever seen small, insignificant things. That is until the strange frost arrives.

With her normal life turned upside down, Cassandra is plunged into an extraordinary and terrifying world of Norse gods and rampaging giants, ancient feuds and broken prophecies.

A handsome stranger offers aid. But can Cassandra really trust him? More importantly, can she trust her own judgement when his slightest touch sets her heart and her body aflame?

What Inspired You to Write Your Book?
I decided to write The Ragnarök Chronicles when I was rereading the Norse myths. I’d previously studied the myths—And loved them!—when I was writing my BA (hons) dissertation on Tolkien at university, and I wanted to revisit the stories after finally seeing the Marvel Thor films. (Yes, I confess, I am a rampant fangirl at times!)
What began as a simple story idea quickly became a labour of love, and this book has more personal meaning to me than anything else I’ve written so far, not least because I had something of a religious epiphany whilst writing it and became Lokean.
I wanted to write Loki as I see him, with a strong basis in the original myths. He’s not perfect—he’s something of an anti-hero—but what I’ve always loved about the Norse gods is how human and recognisable they are—they are none of them perfect, they all have flaws. And that makes them perfect as characters.
I wanted to write a story around the Norse gods that could be read and enjoyed by someone with no knowledge of the original myths, but which would also hold many references and special moments for those who do know the stories. I hope I have succeeded!

How Did You Come up With Your Characters?
Well, in this case, many of the characters were already there for me in the gods and giants of Norse myth, though naturally I wanted to put my own spin on them. They are all based on what is told in the myths, but I have fleshed them out with backgrounds and personalities based on the way I always envisaged them when I read the Eddas.
I also have two original characters—Cassandra (our heroine) and her best friend, Sarah. Cassandra was really the one I started the story with. I already had this idea for a character with the gift of foresight and the coming of an unexpected frost. It was while rereading the Poetic Edda that I had the idea the frost could be linked to the frost giants, and the story grew from there.
There’s a lot of me in Cassandra—her habits and likes and dislikes—and that made her easy to write. I remember reading somewhere once that writing a heroine was basically writing an ideal version of oneself—one who gets the guy! That idea is one that makes me smile. I’d certainly swap places with Cassandra any day!

Book Sample
When the frost came, clinging murderously to every leaf and blade of grass, Cassandra was not surprised. Others viewed the carnage and bewailed the death of their summer gardens, muttering about climate change, but she knew better. For days now she had felt it coming. Her joints ached and she saw ice in her mind’s eye; glittering stalactites dripped into her field of vision, growing more persistent as the days passed. Ignoring the scoffing glances of her neighbours, she had carried the few potted plants she had not already killed off indoors where they would be protected from the coming chill.
Cassandra gazed out of the window at the frost-bitten world beyond her ground-floor flat. The summer sun had reached its peak, its rays warm even through the glass, yet strangely it was not enough. The frost gripped its victims still, refusing to budge, refusing to surrender. It stayed within her mind too, bringing a vague, pulsing chill to her bones. She crossed her arms and retreated to her reading chair, flopping down onto the cushions and hugging one tightly to her chest. It will pass, she told herself over and over.
For as long as she could remember she had had an uncanny ability to sense things before they happened. As a child, she would announce suddenly at dinner that it would rain in the morning, even though the weather report had just predicted a fine day. Or she would inform her frantic mother that the missing mobile phone was in the glove box and not in the house at all. It had freaked out her parents when she was small, but her grandmother had always winked at her and called it a gift, before launching into another of her famous tales of fairies and magic, gods and giants. Usually the message Cassandra received was fleeting—a flash of an image or a vague sensation in her mind, gone as quickly as it had arrived—but not this time. No, this time it lingered, icy tentacles wrapping around her, passing back and forth before her eyes. Tomorrow I’ll be fine again. Tomorrow when the frost clears.