You are here: Home / Fiction / Science Fiction / The Plot to Save Socrates by Paul Levinson 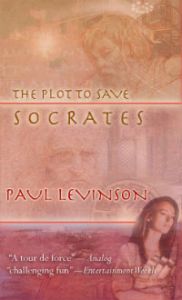 In the year 2042, Sierra Waters, a young graduate student in Classics, is shown a new dialog of Socrates, recently discovered, in which a time traveler tries to argue that Socrates might escape death by travel to the future! Thomas, the elderly scholar who has shown her the document, disappears, and Sierra immediately begins to track down the provenance of the manuscript with the help of her classical scholar boyfriend, Max.

The trail leads her to time machines in gentlemen’s clubs in London and in New York, and into the past–and to a time traveler from the future, posing as Heron of Alexandria in 150 AD. Complications, mysteries, travels, and time loops proliferate as Sierra tries to discern who is planning to save the greatest philosopher in human history. Fascinating historical characters from Alcibiades to William Henry Appleton, the great nineteenth-century American publisher, to Hypatia, Plato, and Socrates himself appear.

What Inspired You to Write Your Book?
I never believed that Socrates, when given a chance to escape his death sentence by hemlock, told his would-be rescuer, “Oh no, I may criticize the state, but I would never put myself above it.” This novel, in the form of a time travel story, tells what really happened to Socrates back then. I wrote this as a time travel story, rather than just historical fiction, because time travel and its paradoxes have always fascinated me. For example, if I traveled to the past, and accidentally prevented my grandparents from meeting, then I wouldn’t have been born – so how would I have traveled to the past in the first place? In my novel, my characters constantly contend with such paradoxes.

How Did You Come up With Your Characters?
I first read about Socrates and what befell him when I was a freshman in college. I knew, at that moment, that I wanted to write about that time in history. Other characters from the ancient world, including Alcibiades, suggested themselves for inclusion in this novel. My characters from the future, such as Sierra Waters, graduate student and heroine of the story, are based on amalgamations of real people I have known.

Still … an ideal person would have followed the plan. It was written on the only substance which could survive decades, maybe longer, without batteries, which required only the light of the sun to be read, or the moon on a good night, or a flickering flame when there was no moon. Paper. A marvelous invention. Thin and durable. And she had just torn it into pieces, opened her palm, and given it to the wind to disperse in irreparable directions.

Sierra was a doctoral student at the Old School, in the heart of Manhattan. Her specialty was ancient Athens, or, more precisely, the adoption of the Ionic phonetic alphabet by Athens around 400 BC — the sprouting of the teeth of Cadmus, as Marshall McLuhan had put it — and its impact on the future of the world. “A nice, tidy, manageable little topic,” Thomas O’Leary, a member of her doctoral committee, had commented, testily. But he had agreed to help her, anyway. He was accustomed to unusual pursuits. He was an odd-ball, himself, an independent scholar with no university affiliation. The Old School had a tradition of allowing one such outside expert on its doctoral committees.

Sierra was making good progress on the dissertation — 72 out of a projected 250-page document, written in under half a year’s time — when Thomas called her down to his office, just off Fifth Avenue and 18th Street, on a wet November evening. He had a copy of a slim manuscript, just a few pages in a worn manila folder. He hefted it, as if to assess its intellectual weight. By the expression on his face, it looked to be quite important. He slid it across his pitted oak desk to Sierra. She had mixed feelings about this — it was no doubt an article of some sort that Thomas had come across and deemed relevant to her dissertation. Sierra hated the thought of having to rethink and rewrite any of her work at this point. On the other hand, she relished uncovering new information. It made her heart jump.

She opened the folder. She looked up at Thomas, who was carefully regarding her, his mouth slightly pursed, a long pen of some sort dangling from his fingers like a plastic cigarette. “It’s apparently been kicking around for a while, at least since the 20s,” he said. “It surfaced recently at the Millennium Club up on 49th Street — their librarian spotted it in an old bookcase, sandwiched between the usual stuff.”

Thomas smiled. “Well, could have been the 1920s, as far as the club goes — it was founded in the 1870s. But the librarian is sure it wasn’t there before 2023 — that was the last time they did a thorough inventory of their holdings — and the Preface says something about carbon-dating the original.”

About the Author:
Paul Levinson, PhD, is Professor of Communication & Media Studies at Fordham University in NYC. His nonfiction books, including The Soft Edge (1997), Digital McLuhan (1999), Realspace (2003), Cellphone (2004), and New New Media (2009; 2nd edition, 2012), have been translated into ten languages. His science fiction novels include The Silk Code (winner of Locus Award for Best First Science Fiction Novel of 1999, author’s cut ebook 2012), Borrowed Tides (2001), The Consciousness Plague (2002, 2013), The Pixel Eye (2003, 2014), The Plot To Save Socrates (2006, 2012), Unburning Alexandria (2013), and Chronica (2014) – the last three of which are also known as the Sierra Waters trilogy, and are historical as well as science fiction. He appears on CNN, MSNBC, Fox News, the Discovery Channel, National Geographic, the History Channel, NPR, and numerous TV and radio programs. His 1972 LP, Twice Upon a Rhyme, was re-issued in 2010. He reviews television in his InfiniteRegress.tv blog, and was listed in The Chronicle of Higher Education’s “Top 10 Academic Twitterers” in 2009.