You are here: Home / Children and Young Adult Books / The Path Of Decisions by Mike Shelton 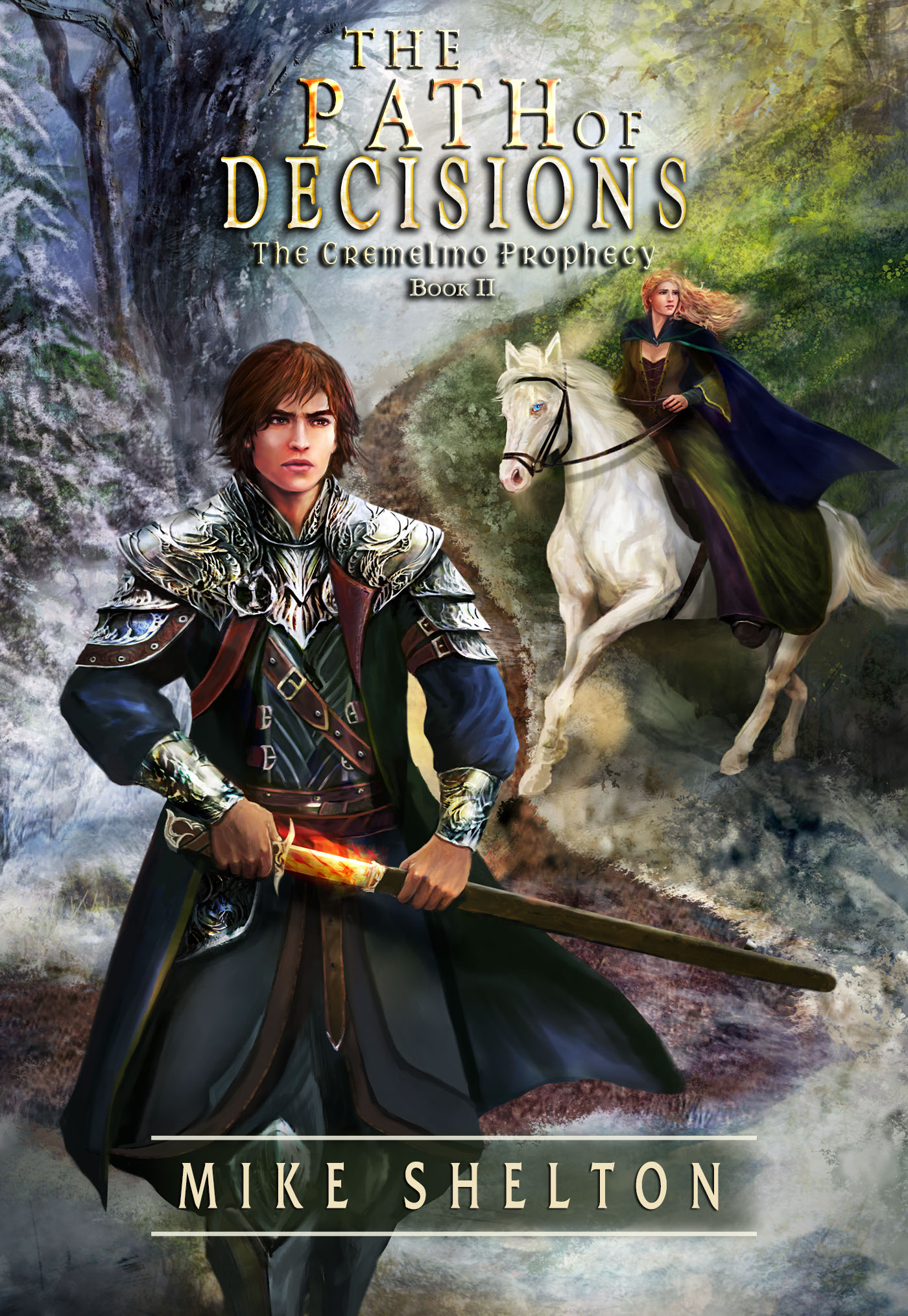 “Forgotten lines of ancient magic and the power of the throne. One will make them both his own if his heart sees the true power. He will bring light to fight darkness and love to fight hate if he reaches into the power of his heart…” So continues the ancient Cremelino Prophecy.

In the second book of this young adult/teen fantasy series, Darius San Williams, now the first commander of the King’s Elite Army struggles with his emerging and ancient powers. After winning his first battle against external foes, he must decide now to follow the King or to take matters in his own hands. Back in Anikari Christine wrestles with how to confront oppression against her people, while in Belor, Kelln must escape the clutches of an evil wizard and warn Darius. Mezar, the captured Gildanian quietly watches everything closely and harbors a secret of his own. Each of their decisions will determine the fate and destiny of their friendship and their kingdom.

What Inspired You to Write Your Book?
This book was originally part of my first book. It got so long I had to split them in two, then I added a third book to complete the trilogy. I loved my characters so much I was inspired to finish off their incredible story.

How Did You Come up With Your Characters?
Over time the story just came in to my head. I must admit, that the names have changed a few times for some characters, but their personalities have stayed the same. I wanted heroes that had flaws, villains, wizards, and even a magic creature (The Cremelino horses)

Book Sample
Christine Anderssn sat on her Cremelino horse, Lightning, at the edge of a meadow she and Darius had named the Field of Diamonds. With a long sigh, she gazed across the Lake of Reflection toward the Superstition Mountains and wondered for the thousandth time in the last seven months if she would ever see Darius again. Her long blonde hair, untied for now, blew around her shoulders in the breeze. Her green eyes, once soft, now hardened, stared off into the distance, as if she was willing herself to find Darius.
Her young life, just shy of eighteen years, had been in turmoil since Darius had left the city. A petition to the King regarding the condition of the farmers had been denied, and recently her father had passed away due to smoke and wounds sustained in a fire that had burned their barns and fields. The fire was set most assuredly by someone from the city who didn’t care for the outsiders, as the farmers were commonly referred to.
The term “outsiders”, and such negative treatment, went back to a time many generations before when a group of wizards from Anikari revolted against the King and the nobles’ rule. In the end, the nobles loyal to the throne had destroyed many of the most powerful wizards and had banished the remaining lesser wizards from Anikari to live in the fields. Since then, anyone living in the farm lands outside the walls of Anikari was deemed an outsider and a threat to the King’s laws and rules by most of the noble bloodlines.
Darius had been one of the few nobles who accepted Christine and her family.
A silent tear now dripped down Christine’s face as she tried to find something to hold on to in her tumultuous life.
Stroking the brilliant white mane of her horse, she felt thoughts of comfort in return. The special Cremelino had been a gift from Darius. It was a breed of large horse usually only allowing one rider. The horse and rider developed a special bond with each other.
Christine had become so used to the Cremelino’s voice in her mind by now. More than just closeness, she found out she could communicate with the horse through their thoughts. She didn’t know if it was normal or not, but surmised that other nobles with Cremelinos were not able to communicate like she did. Maybe it was a remnant of the lesser wizards’ blood that was rumored to flow through some of those who lived in the farmlands still.
Thinking of Darius left her heart feeling empty once again. She still hoped he thought of her with fondness and wished he would return soon.
"Be at peace Christine, he will return."
Through the tears, Christine smiled at Lightning’s attempt at comfort. The horse was so named due to her speed.
“How can you be so sure?” she answered back.
"The Prophecy. Darius has much to do with the prophecy:
Forgotten lines of ancient magic
and the power of the throne.
One will make them both his own
if his heart sees the true power.
He will bring light to fight darkness
and love to fight hate
if he reaches into the power of his heart." . .
“But how can prophecy help our plight? There is no excuse for the treatment we receive. My father is dead!” Christine held the tears in and replaced them with anger. If she couldn’t feel joy, then anger would suffice as an emotion to hold on to. “Can prophecy bring him back?”
"Let go of your anger", the Cremelino chastened her softly. "It will destroy you."
Kicking the flanks of her horse, rather than sending the normal silent command, Christine rode out of the meadow.
“My anger is all I have right now. Darius is gone. My father is gone. Will you leave me, too?” she asked the Cremelino.
"Never, my child. I am here for you. This is the way things are meant to be."
Weaving in and out of leafless oaks and maples sprinkled with green pines, they flew over the late winter ground until they emerged onto the dirt road leading from the farm lands to the city. The road was ill maintained, and pot holes from a recent storm dotted the dirt. A new storm brooded on the horizon, sending a cool wind across Christine’s face.
Up ahead before a bend in the road they spotted movement behind some trees. Christine slowed down, peering forward to catch the movement again. Lightning stomped the ground and whinnied, eyes fixed on the same spot.

Buy The Path Of Decisions On Amazon