You are here: Home / Fiction / Mystery/Suspense / The Mystery of Moutai by G.X. Chen @gxchen1 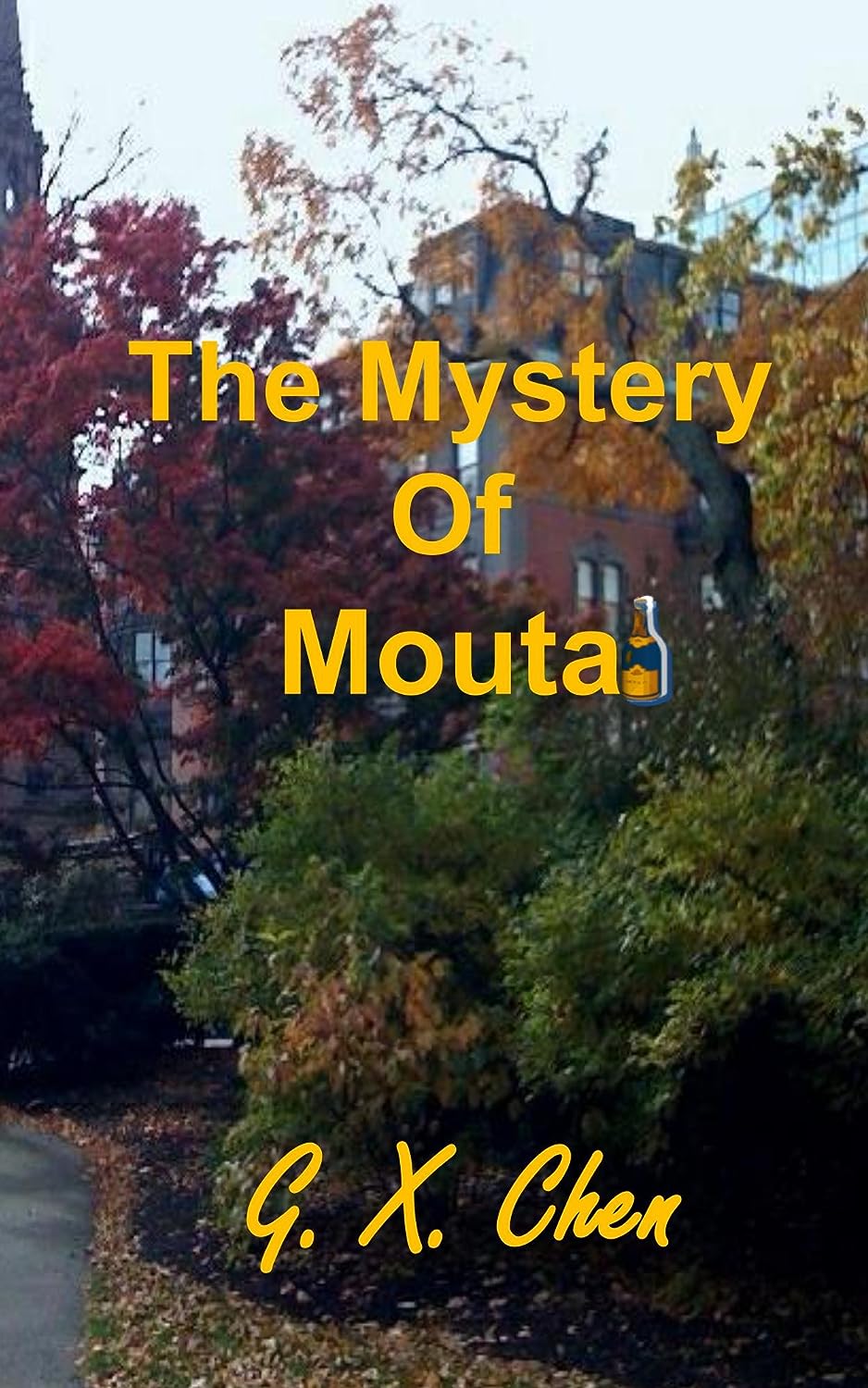 A teenager returns home from school to find a gruesome scene: the apartment he shares with his mother, Shao Mei, in Boston’s Chinatown has been ransacked and she is dead. There is a bottle of Moutai—the most exotic and expensive Chinese liquor—left at the scene and traces of rat poison in one of the two shot glasses on the kitchen counter. This was evidently a homicide, but who could possibly be the killer?

Ann Lee and Fang Chen, close friends of the victim, team up with the Boston police to solve this mystifying crime: why would anyone want to murder a harmless middle-aged woman, one who worked as an unassuming mailroom clerk, with no money, no connections, and presumably, no enemies?

Realizing that important clues behind the motive may be buried deep in the victim’s past, they travel to Beijing, where Shao Mei spent more than fifty years of her life. While there, surrounded by the antiquities of China’s rich and complex history, they stumble unwittingly into a cobweb of mystery and danger. Fearing for their lives but determined to press on, they end up unearthing a scandal more deceptive and far-reaching than either could have imagined.

What Inspired You to Write Your Book?
Quite a few incidents of unethical conduct in academia that I read over the years made me decide to write something about it. What is better than a fictional murder mystery?

How Did You Come up With Your Characters?
The three main characters and the victim also appeared in my other novel The Mystery of Revenge.

Book Sample
In the spring of 1994, John Chan, an athletic teenager, vaulted up the stairs of an old apartment building on the edge of Chinatown in the city of Boston, taking two steps at a time while carrying a hockey stick and a duffel bag full of shoulder pads, helmets, gloves, and skates. He was tired but very excited because he had just played an important hockey game at his school—the winner would go on to the division finals—and he could hardly wait to tell his mother that he had a winning goal in the second period and was congratulated by all of his teammates and his coach. John was starving. Looking forward to a hug; a hot shower; and a hearty, homemade meal, he was rushing toward his apartment, which was located on the third floor of the five-story brick building.

After the door swung open by a touch of the end of his hockey stick, John stopped in alarm. Even if she was expecting a guest, his mother always locked the apartment door—she was afraid of burglars ever since their next-door neighbor had a break-in several months ago. John dropped the duffel bag, placed the hockey stick against the wall and peeked inside the apartment apprehensively. It was late in the afternoon, but the west-facing apartment was still well lit by the sun, which was sinking slowly on the horizon.

His jaw dropped when he saw what had become of his home, which was always neat and clean no matter how hectic the occupants’ lives were. The living room was in total disarray, the floor covered with bits and pieces of books and magazines, and all the drawers and cabinet doors in the kitchen were pulled open—his home had been turned upside down, ransacked.

His voice echoed as he called out, “Mom, I’m home! Where are you?”

No response; the apartment was eerily quiet. Hesitantly, John opened the door wider and entered, trying not to step on the fallen books because he knew his mother, Shao Mei, loved them. A former physics professor at Beijing University, Shao Mei kept all the books she had brought with her from China, even though most of them were getting flimsy and falling apart.

Among all the messes, a shiny object drew John’s attention almost immediately. Sitting on the coffee table in the living room was a slick and colorful porcelain bottle of Moutai, the most famous liquor in China. His mother had been working as a mailroom clerk for an insurance company in Boston and could never have afforded an authentic bottle of Moutai, which would have fetched more than a hundred dollars on the black market in her native country.

He walked over and stood in front of the battered coffee table, looking down at the exquisitely designed liquor bottle, which seemed empty. Then, he noticed something bulky stuck between the sofa and the coffee table. It was his mother, face-down on the floor. On her partially hidden, painfully distorted face, blood trickled from her nose and her mouth. His legs started trembling violently. John screamed, but no sound came from his mouth. It was seemingly a long time before he was able to control his limbs. He ran to the kitchen, picked up the phone, and dialed 911.

The rest of the day was a blur. Police officers and detectives came and went, along with a team of forensic specialists and an ambulance. Everything in the apartment and around the body was checked, including a fancy gift box in the trash can, two shot glasses on the kitchen counter, and the empty bottle of Moutai. The forensic officers used protective gloves, putting all the items, one at a time, carefully into separate evidence bags.
After the body was taken away, a tall and sturdy man in his early fifties came into the bedroom where John was sitting and placed a hand on his shoulder. “Paul Winder-man,” he said in a soft voice, “detective sergeant from the Boston Police Department. And your name please?”
“John Chan,” John murmured without looking up at the police officer.

“John,” Paul said, kneeling down to face the kid at the same level. “Do you have any relatives in town?”

“No,” John said and shook his head, looking into Paul’s deep and pale blue eyes in despair. What’ll happen to me now? He thought in panic. Where will I go? His mother was the only family he had in the US. He dropped his head and started weeping.

Paul kept his large hand on John’s shoulder. What a pity. The poor lad might have to be sent to social services, he thought sympathetically. “Do you know anyone in the city—your mother’s friends, for example?” he asked hopefully.

John lifted his head and nodded. “My mom was friendly with Auntie Ann Lee and Uncle Fang Chen,” he told the detective between sobs. According to Chinese tradition, he addressed all of his parents’ friends as “uncles” and “aunties” even though they weren’t blood relations. As far as John knew, Auntie Lee and Uncle Chen visited his mother often when she was alive—sometimes they’d take him along to have dim sum in Chinatown, an area he and his mother lived on the edge of, where the rent was cheaper than most places in downtown Boston.

Paul Winderman’s eyes lit up when he heard the names. He had dealt with both of them in a previous murder case a few years ago. He liked Ann a lot, a very capable young woman and a straight arrow, but he didn’t trust Fang Chen because the professor had played hocus-pocus with the police rather than cooperating the last time they met.

Paul processed the facts in his head for less than a minute before placing a few calls. Due to the fact that Ann didn’t own a car, he dispatched a police cruiser to pick her up. Half an hour later, a sober and red-eyed Ann Lee showed up at Shao Mei’s apartment to take John away.

“I’ll pack up everything you need and deliver to you as soon as I can,” Paul told the kid, who had rested his head on Auntie Lee’s shoulder and was crying.

Lifting his head, the kid said nothing but nodded with tears in his eyes. With Ann’s help, he stuffed a few sets of clothes into his duffel bag, picked up his backpack and the hockey stick, and left his home in the US for the last time.

Another warm night; the breeze coming from the open windows makes me feel it’s an early summer rather than spring day.

It has been a thrill to know that I will soon meet my old friend who suffered much at the hands of the Red Guards during the Cultural Revolution. I’m extremely excited about the opportunity to renew our friendship. I don’t have many old friends anymore, having lost all the contacts when I moved. I particularly crave the comrade-ship we forged during the formidable years when we were both young.

It’s fascinating for me to think what this friend of mine will say or what her reaction will be when I show up at her door. I probably should call her first or send her an e-mail, but I’m not sure if she has an e-mail account, or even a computer—still a luxury item for most people. I heard she has fallen on hard times since she left China. The poor thing!

I’m sure I can cheer her up with my visit and my unique gift. It’s only fitting that I should bring her the best.

About the Author:
G.X. Chen is a freelancer who lives in Boston ( both of her mystery novels are based in Boston); permanently moved from China to the US after Tiananmen Massacre in 1989. Previously published books include The Mystery of Revenge (a mystery novel) and Forget Me Not: A Love Story of the East (a historic fiction/romance) and several other novels in Chinese.