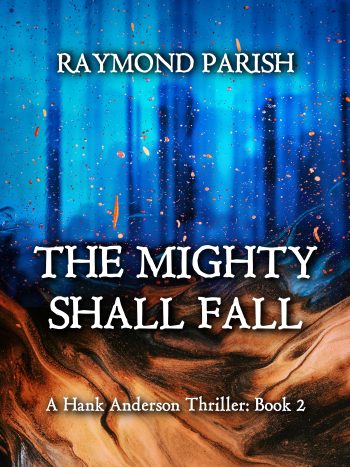 Hank Anderson is stuck in the aftermath of the tragic life of Kenny Jensen when Seth Oberstreet is dropped at the door of Anderson & Greenberg Counseling, hundreds of miles from home. In moments, the speed and trajectory of Hank’s recovery is up for grabs. As Seth’s story unfolds, Hank’s mission to protect the vulnerable collides with his compulsion to solve complex human puzzles. Disoriented, on the edge of collapse, Seth has come under the influence of The Scholars of Calm – a secretive spiritual movement led by self-proclaimed guru, Taranis Tyr.
Why did this sect step out of the shadows now? And why choose Hank?
Hank needs backup. That’s before Seth disappears. Detective Phil Evans answers the call, setting in motion a desperate search that places them all in the sights of those who value death over truth, while forcing Phil to confront his own long-buried trauma.

What Inspired You to Write Your Book?
After four successful nonfiction books, I choose a new challenge. Fiction. A central character, premise, and setting had bounced around in my head for several years. When I committed to the story, my vision only extended as far as Overnight Delivery, the first Hank Anderson novel. Somewhere along the road I was captured by the idea that the growth of the relationships in OD presented the possibility that my readers would want to spend more time with these folks. A second storyline, complete with villains, rose to the surface and, multiple drafts later, The Mighty Shall Fall – Book 2 came to life. Initially planned as a prequel, focusing on the backstory of Hank’s connection with Detective Phil Evans, I quickly realized that several of Hank’s crew I had come to know and love would be eliminated from the narrative. Couldn’t do it. The Mighty Shall Fall became a sequel, and the backstory is contained within.

How Did You Come up With Your Characters?
I am a mental health professional, which made the decision to write my central character as a fictional, out of the ordinary psychotherapist an easy choice. The joy in writing Hank has been the creation of a curious, courageous, funny, deeply committed man who is also flawed — at times impulsive to the point of recklessness. Surrounding him with a diverse cast of equally committed folks who ride the roller coaster of his misadventures draws on my lifetime of focus on relationships. A powerful influence in developing the connection between Hank and Detective Evans was my research on the friendship between Bruce Springsteen and Clarence Clemons, The Big Man, sadly deceased sax player for the E-Street Band. Small man, tall man. Both powerful. Wild in their own ways. As I move into Book 3, stepping into a part of the world that I know well with the intention to create larger-than-life stories about credible, imaginary people, including villains, is endlessly fascinating.

Links to Purchase eBooks – Click links for book samples and reviews
Buy The Mighty Shall Fall: A Hank Anderson Thriller – Book 2 On Amazon