You are here: Home / Fiction / Action & Adventure / The Midas Plot: Plus Ultra by Frankie Albritton 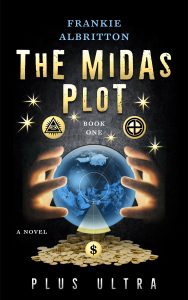 Midas and his Eternal Ones are employing dark powers to manipulate gold markets and change human history during the tumultuous period encompassing the First World War. Cowboy, Army aviation pioneer, and banker Matt List must fulfill a prophecy and accept the leadership of the Eternal Ones or risk losing Helena, Midas’ beautiful daughter. Will Matt sacrifice love and end the journey of the Eternal Ones where it all began—on earth?

What Inspired You to Write Your Book?
Gold has had a mysterious hold over mankind (As the Roman poet Virgil said, "Auri sacra fames—The cursed thirst for gold"). This fictional account chronicles the period when gold reached its pinnacle – the gold standard of the 19th and 20th centuries. A cult perpetrates a conspiracy to manipulate gold markets. It's too fantastic to be true. Or is it. I want to entertain while also educate on the topic of gold.

How Did You Come up With Your Characters?
I wanted a main character who was virtuous yet believable – a product of the Southwest and Europe.

Book Sample
It was late afternoon, the usual time for café patrons all over Germa-ny to be enjoying their coffee and newspapers. That would have been in a different year. Matt looked around. The Café Kranzler, located on the richest street in Berlin, the Kurfürstendamm, was still elegant if not neglected. Matt remembered being in this very café in 1906. Then, he was trying to figure out how to accomplish his mission of stealing the Schlieffen Plan for the German invasion of France. He remembered nervously humming a Harvard football fight song while he waited. Putzi Hanfstaengl, Harvard classmate of Teddy, Jr., had banged out the song on President Theodore Roosevelt's basement piano at the White House just a few months before that first visit to Berlin. It was the same Putzi who had saved from bankruptcy the very Nazi party newspaper Matt now held in his hands, the Völk-ischer Beobachter. The paper had helped launch the Nazis. How their paths had diverged—poor Putzi had a falling out with Hitler and Goebbels and now was being held by the British. Matt had been in the basement of the White House that day given his own “crowded hour” with President Roosevelt. Two Rough Riders, charging up Kettle Hill. Matt’s father had always said he had a destiny to fulfill. It had to be destiny. It was too unbelievable to be anything else.

Buy The Midas Plot: Plus Ultra On Amazon