You are here: Home / Fiction / Action & Adventure / The Mercy Run by David O’Neil 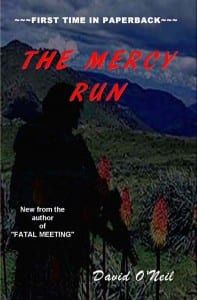 Tom Merrick, having broken down on the way north in Kenya, hears gunshots in the trees, he manages to rescue the group of drivers plus Charlotte Hammond and Brenda Cox, it suits him to link up with them in their task of getting their supplies to the starving people of Ethiopia at the camp in Adama. Deciding to stay with the charity group his experience as a Special Forces soldier gives the group an edge in getting convoys through. The government will not protect them. Over the next two years Tom’s expertise is stretched to the limit as they cross swords with Colonel Gonbera, leader of a company of bandits feared throughout the area. With the help of loyal African charity workers and employed drivers and guards the trio set up a security unit for the convoys. Involved more and more in the political scene of the area, Tom becomes responsible for security in the area. When a possible diamond strike is found, the Russians and Chinese join the mixture. Through tragedy and heartache the battle for control of the Area is won.

How is Writing In Your Genre Different from Others?
I don’t think it is. It would be an arrogant person who claimed that their writing was different from others. Some is more pleasing , some is more attention grabbing, but good writing is the important thing.

What Advice Would You Give Aspiring Writers?
Don’t think about it !Do it! I often hear people say “I intend to write a book about it one day.” or ” I aleays meant to write the story.”
Books don’t write themselves. Putting one word after another is a good start.
Decide what your story is about, and get on with it. If your English is a bit shaky, remember there is a spellchecker. and or someone else who can edit what you have written. For some it is easy ,others it is hard, but all writers need the discipline to actually persevere to the end.
In 1972 I wrote a complete novel by hand, it was 19000 words. It was like a precis of the book I intended to wrote. I started writing in 2007, I have now had eight books published

Author Bio:
Artist and Photographer David O’Neil started writing seriously with a series of Highland guide books. His boyhood ambitions were to fly an aeroplane, and sail a boat. As a boy he and his family were bombed out of their home in London. He learned to fly with the RAF during his National Service. He started sailing boats while serving in the Colonial Police, in Nyasaland (Malawi). He spent 8 years there, before returning to UK. Since then he lived in southern England where he became a management consultant, for over twenty years. He returned to live in Scotland in 1980, and became a tour guide in1986. He started writing in 2006, the first guide book being published in 2007. A further two have been published since He started writing fiction in 2007 and has now written five full length novels. He has a collection of short stories in publication at present.

What Inspired You to Write Your Book?
I thought I would try a book about Africa, I was \ Police officer there for several years though not in Ethiopia or Kenya, I did visit both. I aleays felt sorry for the ordinary people. Being told by folk who only read the newspapers ,how badly we Europeans treated Africans. I tried to get across the fact that the biggest burden Africans carry, is that from their own so-called leaders.