You are here: Home / Fiction / Mystery/Suspense / THE MEMORY BOX by Eva Lesko Natiello 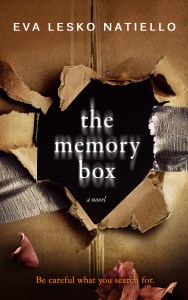 What would you do if you Googled yourself and uncovered something shocking?

In this gripping psychological thriller, a group of privileged suburban moms amuse themselves by Googling everyone in town, digging up dirt to fuel thorny gossip. Caroline Thompson, devoted mother of two, is relieved to hear that her name appears only twice, citing her philanthropy. However, a delayed pang of insecurity prods Caroline to Google her maiden name—which none of the others know.

The hits cascade like a tsunami. Caroline’s terrified by what she reads. An obituary for her sister, JD? That’s absurd. With every click, the revelations grow more alarming. They can’t be right. She’d know. Caroline is hurled into a state of paranoia—upending her blissful family life—desperate to prove these allegations false before someone discovers they’re true.

The disturbing underpinnings of The Memory Box expose a story of deceit, misconceptions, and an obsession for control. With its twists, taut pacing, and psychological tenor, Natiello’s page-turning suspense cautions: Be careful what you search for.

What Inspired You to Write Your Book?
The impetus for THE MEMORY BOX came from an article featured in The New York Times which pronounced “‘vanity searches’ (like the ones done on Google) the ‘hottest new power game.’” It mentioned that a 17-year-old boy who was living in Los Angeles, Googled himself and discovered he was on a missing persons list in Canada. He had no idea until he Googled himself, that he was a victim of parental abduction. The fact that someone could find out something so personal about himself from a Google search was a fascinating concept to me.

How Did You Come up With Your Characters?
The setting for THE MEMORY BOX is a fictional town called Farhaven, a suburban town which is loosely based on the New Jersey town I live in. When I started to write The Memory Box, I was relatively new to the suburbs. I had just moved to New Jersey from New York City. It presented an instant learning curve. With my young children starting school, I was plopped into a new social circle of suburban moms. There is a definite way things are done in the suburbs that’s different from the way they’re down the city. I knew instantly that I wanted to set this psychological suspense in a bucolic suburb where the community of stay-at-home moms, a sub-culture all its own, would help highlight the juxtaposition of conformity and deception.

Book Sample
It’s impossible to un-know a secret. Once you know it,
you own it. It can’t be returned like a borrowed book.
Or burned like a love letter. The click of a mouse won’t
delete it from the conscious mind. It’ll stick to the walls
of your memory like dried oatmeal to a dish. The secrets you wish you never knew become a burden to lug. A bowling ball without holes. Some people are great collectors of secrets. They’re smitten to roll around, like swine, in the muck of them. They are shameless purveyors, gloating with pride to be the bearer of
indelicate news.
I am not one of those people. I don’t want to pry into
the backstories of others with a crowbar and a meat hook. What’s happened to privacy anymore? Nothing is private. Everything is knowable.
The thing about secrets is they’re mostly regrets, aren’t
they? I mean, “good news” secrets aren’t really meant to be kept. Just the embarrassing, shameful kind. Everyone’s said or done something they wish they hadn’t. Maybe they were young and immature, or drunk and displayed temporary poor judgment. Do these things need to be broadcast? Should mistakes be tattooed on forearms?
The latest gossip around town is about a man whose
daughter is in Lilly’s third-grade class at Lincoln Elementary School. When he was young and drunk, he took a dare from a frat brother and streaked through the dean’s backyard. Unfortunately for him, he was unaware of a ditch being dug and fell into it, breaking his fibula in the process, which left him stranded to sober up in a dark hole, waiting to be rescued in his birthday suit. One of our neighborhood snoops discovered this by Googling his name. Now this mature adult is living the shame all over again, as the gossipmonger moms of Lincoln Elementary pass their babble baton down a line of
eager recipients. I’m surprised by how prevalent this rumorwielding type is. Even in a place like Farhaven.

Buy THE MEMORY BOX On Amazon