You are here: Home / Fiction / Fantasy / The Martyr and the Prophet by C.B. Currie 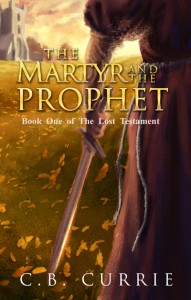 It is a realm of poverty, plague, war and darkness. A novice monk finds it hard to take his vows seriously and flees his monastery. A fallen warrior is cast out by his own kin. A village girl learns she can wield immense power in her simple hands. As their lives collide and the kingdom descends into chaos around them, they discover a terrible truth that could change their world forever.

The Martyr and the Prophet takes place in a dark medieval world. It follows the lives of common people, not lords and princesses and explores themes of love, loss, betrayal and the search for truth. Belief is not always redemption, gods may not be what they seem and magic, long lost and forgotten may yet exist in the hands of those who are chosen.

Targeted Age Group:: Not for kids – high teens and up

What Inspired You to Write Your Book?
Growing up in the seventies and eighties, Ioved Star wars and Indiana Jones, and read Fighting fantasy and Dragonlance. I now reads mostly non-fiction: history, military, economics, politics, and travel stories, which inspired me to write, of all things, Fantasy.
Influences include George R.R. Martin, Bernard Cornwell, Michael Moorcock and James Clavell; fantasy artists Larry Elmore, Keith Parkinson and Rodney Matthews. I also draw heavily from history books, especially on medieval Europe, and the ancient Near East.

How Did You Come up With Your Characters?
Most are based on people I’ve met, transplanted into a fantasy setting. It gives me a real handle on their motivation, personality and quirks.

Buy The Martyr and the Prophet On Amazon