You are here: Home / Fiction / The Mark by A. A. Peterson 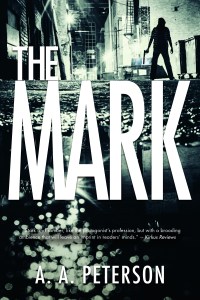 He’s a cold-blooded killer, whose methods rarely justify his menace, however, his storied past has a curious way of catching up with him. When a disillusioned soldier leaves his military career to become a gun for hire, he resolves to once and for all sever his interests from outdated notions like patriotism and duty. His latest task is to finally eliminate a crime boss’s longtime rival. However, before he finishes the job, he finds out more than he had bargained as unknown forces conspiring against him. And, he commits career suicide by leaving a witness behind, and breathing. Can he find out just who has him in the crosshairs before he himself becomes a mission accomplished?

As he uncovers a seamy world of human experimentation, and a perilous new world of scientifically engineered bloodlust, our unapologetically offensive antihero learns that there is far more than meets the mark than he had ever imagined. Swiftly changing places from the pursuer to the pursued, he also falls prey to an attraction that may prove deeply fulfilling, if it’s not fatal first. Find out who will meet their maker in The Mark, the riveting read of global proportions by A. A. Peterson, where the players will be played, and the hunters will be hunted. It’s a must for anyone who relishes a razor-sharp, heart-racing read with a protagonist who would rather kill than play nice.

How Did You Come up With Your Characters?
The main protagonist needed to be flawed or emotionally strained otherwise he will not have any connection to the audience. The antagonists needed to be smart but also fanatical with a deep desire for revenge.

About the Author:
A. A. Peterson is the proud author of “The Mark”, his debut novel available now on Amazon as a paperback or in electronic form as a Kindle title.

Links to Purchase eBooks
Link To Buy The Mark On Amazon