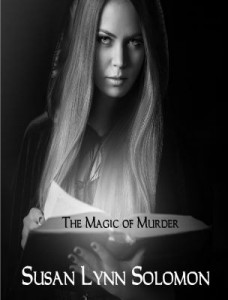 About The Magic of Murder:
When his partner is discovered in a frozen alley with eight bullets in his chest, Niagara Falls Police Detective Roger Frey swears vengeance. But Detective Chief Woodward has forbidden him or anyone else on the detective squad to work the case. Emlyn Goode knows Roger will disobey his boss, which will cost him his job and his freedom. Because she cares for him more than she’ll admit, she needs to stop him. Desperate, she can think of but one way.
Emlyn recently learned she’s a direct descendent of a woman hanged as a witch in 1692. She has a book filled with arcane recipes and chants passed down through her family. Possessed of, or perhaps by a vivid imagination, she intends to use these to solve Jimmy’s murder before Roger takes revenge on the killer. But she’s new to this “witch thing,” and needs help from her friend Rebecca Nurse, whose ancestor also took a short drop from a Salem tree. Also in the mix is a rather hefty albino cat (Elvira detests being called fat). Rebecca’s not much better at deciphering the ancient directions, and while the women and the cat stumble over spell after spell, the number possible killers grows. They’d better quickly come up with a workable spell: when Chief Woodward’s wife is shot and a bottle bomb bursts through Emlyn’s window, it becomes clear she’s next on the killer’s list

This book pulled me right in. I think it must have been the fact that Susan Lynn Solomon puts her characters first. The story revolves around the murder of a Niagara Falls Police officer… The adventure that ensues is absolutely entertaining and well-written. It is funny, exciting, and fast-paced. Every character has depth and is…believable. The Magic of Murder is one fun read and is definitely worthy of all 5 stars.
—Frederick Crook, author, Of Knight & Devil

Suspense, humor, compelling characters, a dash of the supernatural dating back to Salem, a powerful sense of place, and Emlyn Goode, a passionate and determined woman new to witchcraft and murder. Susan Lynn Solomon captures both the city of Niagara Falls and its quirkiest resident, an unusual sleuth. The Magic of Murder is a winner ad, we hope, only the first appearance of Emlyn Goode.
—Gary Earl Ross, author of Blackbird Rising and the Edgar Award—winning Matter of Intent

Link To Buy The Magic of Murder On Amazon