You are here: Home / Fiction / Fantasy / The Living Stone – the Chronicles of Eres Book 1 by M.B. Mooney 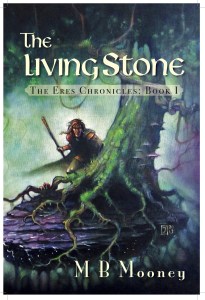 After centuries of corruption and war, the elven Empire of Kryus has conquered and colonized the land of men, oppressing humanity into a false peace and suppressing the truth of who they once were.
Caleb De’Ador – a man haunted by prophecy and his own past – returns to the land of men to raise up an army and teach humanity how to be free once again.
But before this revolution can begin, Caleb must find and reach the ancient and powerful Living Stone.
At the same time, a long forgotten evil is unleashed, threatening to throw all living beings into an even greater darkness.

What Inspired You to Write Your Book?
I wanted to write the type of book that I wanted to read, and there weren’t any out there.

I love science fiction and fantasy. I read everything from C.S. Lewis and Tolkien to George RR Martin and Joe Abercrombie. I enjoy dark stories with violence and gritty scenes and characters, but I also enjoy stories with spiritual and redemptive themes like Narnia and The Lord of the Rings. So I wanted a story, and epic fantasy, that contained the dark, the violent, as well as the spiritual redemptive themes. I worked on the world and the story for five years before writing the first of the series, the Living Stone.

How Did You Come up With Your Characters?
Characters come from a lot of different places. Some are based on different aspects of my own personality. Of course, several are based on friends and family, loosely. I want my characters to feel real, so I take time to come up with their histories and what they want and desire.

About the Author:
MB Mooney has traveled the world, teaching in the Republic of Korea and visiting places like Fiji, China, and the Philippines. He loves to write books, stories, and songs. His books are fantasy/sci-fi related, and his first published novel is The Living Stone: The Eres Chronicles Book 1.

Mooney lives in Lawrenceville, GA with his amazing wife and three energetic kids.