You are here: Home / Fiction / Historical / The Little Sentinel of the Sierra Nevada by Paul Williams 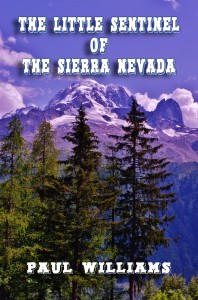 It is 1846 and Sarah Harlan is just thirteen when she sets out with her family on the great trek West to California. Confident and assured beyond her years, schooled and shaped by the Father she adores, Sarah believes life has little more to teach her. But this is a journey like no other. In crossing a Continent they must face all that nature can unleash upon them; tempests and floods; raging rivers and scorching deserts; disease and starvation.

To face these challenges and overcome them, Sarah must also take her own journey of discovery. Encouraged by her cousin Nathan, she must look within and find the truth of who she wishes to be, of who she must be.

Before her long journey is through her strength and resolve will be tested beyond endurance as, above and beyond the torments of the road before them, their small group must face the cruelty and corruption of their fellow travellers. A disagreement between two groups that will fester and grow; a poison that will cast a shadow across their path, until one last bloody confrontation high in the Sierra Nevada mountains.

What Inspired You to Write Your Book?
I have always held a fascination with the history of the American West and, having written mainly in the modern world, I knew this was where I should set my first novel.

How Did You Come up With Your Characters?
My main protagonist is thirteen year old Sarah Harlan. I wanted to show the harsh reality of the early pioneer lives, but to avoid the clichéd male view. So much of the hardship was borne by the women on these journeys, and I felt Sarah could best relate these experiences through the eyes of an innocent.
With regard to my main protagonist, Tom Mallon, I wanted to create a man that, however low or base his character, there was always the spark of desperation and want visible that drove his behaviour.

I have spent too long wearing black these recent years. It is, I suppose, an inevitable consequence of aging that those about us should be taken with ever greater frequency. We see death claim our friends and loved ones with wearisome regularity, and we mourn dutifully. But today, sitting here alone, I cannot help but feel this will be my last time to mourn. I feel the advancing years in my heart as much as in my frail body.
Today I bore witness as San Francisco laid one of its greatest Sons to rest. Nathan Harlan was a man I felt proud to call cousin. Abolitionist; fighter for the Cause; reformer and defender of the oppressed, he was a man of vision and enterprise; of courage and compassion. A man I have been proud to serve in my own small way for over half a century.
It is but a matter of hours since the casket was lowered into the hallowed earth, and the words of the many dignitaries called upon to speak still echo in my thoughts. Perhaps it is the sense of inevitable greatness that surrounded Nathan, so eloquently expressed by the good and righteous of this fair city that has set my present mood of reflection. Many spoke of his success as though he had followed a pre-determined course. They allowed for no uncertainty in their telling of his life, and I flinch now to recall how many speakers referenced his destiny. I know he would chide me if he was here, but I cannot help but feel that old twist of anger at such foolishness. Nathan crafted his own destiny through his undaunted perseverance. Together, we fought long and hard for each victory we celebrated.
“Ambitions must be pursued with vigour.”
I believe those were the words I once used. And he laughed, as he always did when he believed I was being too serious. “Sarah has her stern face on,” he would say, but still he would heed my words.
There was but one reference today to our long journey West those many years past. The eminent editor Samuel Lawrence spoke briefly on the topic. He spoke of the dangers we faced; the hardships we endured and the losses we suffered, but there was no one within the chapel to remember or mourn those fateful days. It felt uncomfortable to hear that tale, so distanced from the experience we shared. And then the next guest returned to the theme of Nathan’s destiny, and I allowed my mind to drift back to those earlier times.
For one moment from my seat in the crowded chapel I felt the warm breeze of the open prairie on my face once again. If I close my eyes I can feel it still, even as I sit here and write. I can feel the warmth of the mid-day sun and hear the shifting grass as it dances endlessly in the wind. I am thirteen again, enthralled by the promise of what may be. Of what will be. And they are all there once again, all those pioneers long since lost. Mother and Father are there, along with my sister Millie. Uncle Jacob and Aunt Margaret are there. And Cousin Nathan. I can smile now at his youthful innocence. So few from today’s service would recognise the great man they buried in that youngster. A boy with a handful of books and a headful of ill-defined notions, struggling to recognise his own potential.
So many memories from those days have been buried and forgotten and I feel now, with Nathan so recently laid to rest, it is time I paid them one final visit. I will set them down as a permanent record from a forgotten age. It is fifty-seven years since we loaded our wagons and left Chicago on the long road to California, and there are scenes I must face once more before I pass.

I can see Nathan once again, his head cradled in my arms as he clings weakly to life, the ground beyond dark with the blood that has been spilt.
“My little sentinel,” he called me, a fading smile on his lips.
And I know the lifetime of achievement we celebrated today; the great deeds written broad across History, none of it could ever have happened but for those earlier adventures.

Buy The Little Sentinel of the Sierra Nevada On Amazon