You are here: Home / Children and Young Adult Books / The Last Orphans by N.W. Harris 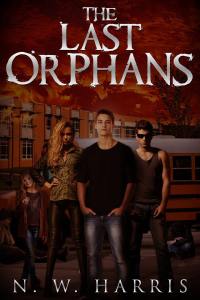 One horrifying day will change the life of sixteen-year-old Shane Tucker and every other kid in the world.

In a span of mere hours, the entire adult population is decimated, leaving their children behind to fend for themselves and deal with the horrific aftermath of the freak occurrence. As one of the newly made elders in his small town, Shane finds himself taking on the role of caretaker for a large group of juvenile survivors. One who just happens to be Kelly Douglas–an out-of-his-league classmate–who, on any other day, would have never given Shane a second glance.

Together, they begin their quest to find out why all of the adults were slaughtered. What they find is even more horrifying than anything they could have expected–the annihilation of the adults was only the beginning. Shane and his friends are not the unlucky survivors left to inherit this new, messed-up planet. No, they are its next victims. There is an unknown power out there, and it won’t stop until every person in the world is dead.

A spine-tingling adventure that will have you gasping for breath all the way until the last page, The Last Orphans is the first book in an all-new apocalyptic series.

What Inspired You to Write Your Book?
I grew up in the South, and I love science fiction. I’ve always wanted to write a story that merges the two—that takes small-town kids and puts them in an extraordinary situation. I wanted to show the tenacity and strength of those polite people who live in the backwoods of America, and I wanted to use the setting in which I was raised in a novel. I also love writing science fiction and post-apocalyptic stories. The Last Orphans has been brewing in my mind for many years, though I wrote several other books before attempting it. I was in love with the story before the first words were laid down, but wanted to polish my craft before writing it.

How Did You Come up With Your Characters?
My characters are a blend of people from my past and present. I took bits and pieces of different friends, people I remembered from growing up, and people I only knew for a short period of time and combined them to form the characters. I wanted to use a cross section of the kids found in small town America and show who they could survive the impossible. The characters led normal lives before the apocalypse its; a footballer, a cheerleader, a goth girl, a nerd, army brat, etc. When things get bad, they must find the hero in themselves in order to stay alive and protect those they care about.

Book Sample
Light faded from the gloomy heavens as Shane climbed over his aunt and out of the passenger side of the cab. Ominous green clouds still choked the sky, but the air was calm and quiet. He walked a few yards away and turned around, staring absently at the wreckage and wanting to die. The truck door hung open, his aunt’s swollen feet sticking out. Crippling numbness overtook him, pressing in on all sides, as if he were being buried in wet cement. It invaded his mind, drowning his thoughts, and leaving only dejected questions that no one could answer. What was he supposed to do now? Why did he have to still be alive when everyone he loved was being taken from him?
“Help!” A girl’s hysterical voice ripped through his viscous daze like a bullet through a soda can. “Can you please? Help!”
The voice was pitched with agony and grief, but also very familiar.
Shane pivoted, the weight of his aunt’s nightmarish demise making it hard to move.
Two girls ran up the Douglas’ long, gravel driveway toward him. The taller one’s tangled, blonde hair billowed behind her. She wore cutoff blue jeans and a baggy, white T-shirt with crimson paint smeared across her chest. She dragged a shorter version of herself by the hand behind her as she ran. It took a second for Shane to register who it was.
“Kelly?” he shouted, his voice hoarse with shock. Struggling to break free of the catatonic state threatening to turn him into stone, he jogged heavily down the driveway to meet her.
“They killed my dad and my mom!” she shrieked, her eyes wild and her gaze darting like she expected some horror to jump out of the fields and attack her. “They went berserk and trampled them!”
“Wait—slow down.” Shane grabbed her shoulders to steady her. Her distress tore his mind away from the despair seeping through every part of his body, starving him for breath and welding his joints together. “Who killed your parents?” He realized the red on her clothes was fresh blood.

About the Author:
Born at the end of the Vietnam war and raised on a horse farm near small town north Georgia, N.W. Harris’s imagination evolved under the swaying pines surrounding his family’s log home. On summer days that were too hot, winter days that were too cold, and every night into the wee morning hours, he read books.

N.W. Harris published his first novel—Joshua’s Tree—in 2013. It was no wonder that with his wild imagination and passion for all things word related, that N.W. Harris was named a quarter finalist in Amazon’s Break Through Novel Award Contest. In early 2014, N.W. Harris joined the ranks with Clean Teen Publishing when they signed his new young adult apocalyptic adventure series—The Last Orphans.

In addition to writing, N.W. Harris has been a submarine sailor, nurse, and business owner. His studies have included biology, anthropology, and medicine at UCSB and SUNY Buffalo. He lives in sunny southern California with his beautiful wife and two perfect children. He writes like he reads, constantly.